« Older: Gregorio Najarro to be sworn in as the new president of the Rotary Club of Ambergris Caye
Newer: » Meet our new reporter Julissa Torres!


On January 31st, 2020 Tropic Air welcomed the delivery of its first and brand new 1900D Beechcraft. The model is described as a modern twin-engine, 19 passenger regional airliner and is manned by a crew of two. The Beechcraft arrived at the Philip Goldson International Airport at 4:15pm after a ferry flight from the United States. The aircraft will be put into service on Tropic Air’s main international routes, which include flights from Belize City to Cancun Mexico, Roatan Honduras, and Flores Guatemala. The aircraft can reportedly make a trip from Belize City to Cancun in approximately 50 minutes, emphasizing speed and passenger comfort. 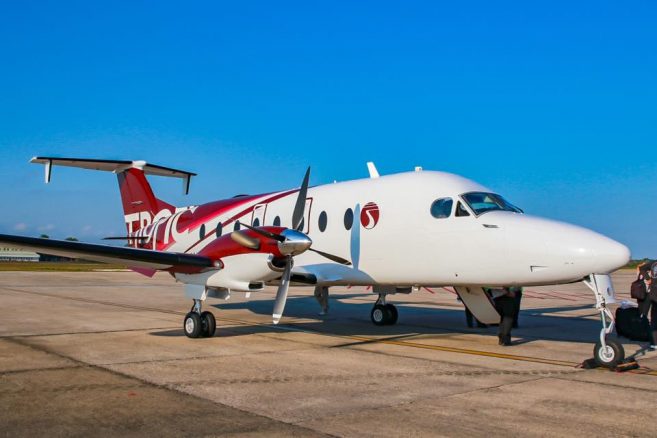 John Grief III, President of Tropic Air, stated in a press release that the Beechcraft is a significant investment for the company and that they’re excited to be the first in Belize and Central America to fly such a craft in passenger service. Steve Schulte, CEO of Tropic Air, added that it’s also an investment into the future of tourism. He stated that the aircraft opens up the door for opportunities to extend their services to other neighboring countries, increasing tourism arrivals and building regional business relationships. Tropic Air has yet to debut its newest aircraft officially, but The Sun will be following closely along for updates.