« Older: The Office of the Special Envoy for the Development of Families & Children Condemns the Murder of Kendra Middleton and her son, Aiden Middleton
Newer: » The second shipment of COVID-19 vaccines arrive in Belize 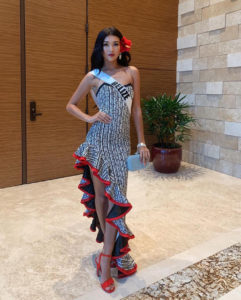 Miss Universe Belize Iris Salguero is in Miami, Florida, USA representing La Isla Bonita and Belize in the 69th international Miss Universe pageant. Salguero continues to prepare for the main event on Sunday, the 16th of May, and has participated in several activities. On Thursday, the 13th of May, she will proudly represent her country in the National Costume Competition depicting a holiday and Belizean tradition. It will be live on the Miss Universe Facebook fan page (https://www.facebook.com/MissUniverse).

According to Salguero, the national costume celebrates Belize’s greatest benefactors, Baron Bliss. An English sail man who visited Belize in 1926 and fell in love with the Jewel. Aboard his yacht in front of the Belizean shores, he passed away and left a large fortune to the country. Every 9th of March, Belizeans celebrate the public and bank holiday as Baron Bliss Day. A Baron Bliss memorial lighthouse stands in Belize City in the Fort George Area.

Salguero said that the national costume represents the lighthouse, and her headpiece lights up. She said initially the outfit had a blue trail illustrating the water and identifying her as an island girl, along with kites that people tend to fly during the month of March when Baron Bliss is celebrated. These details have since been modified. Salguero said that the meaning behind the national costume is to share a part of Belize’s history and how Baron Bliss’s love benefited the country.

On Friday, the 14th of May, the preliminaries will occur, and a panel of judges will interview delegates. On Sunday, the grand event, in which a new Miss Universe will be selected, has already seen scheduled events around the country to support Belize’s candidate. In San Pedro Town, several restaurants will host watch parties to see the pageant on large flat screens while offering food and drink specials.