It’s been awhile since The San Pedro Sun has reported on problematic crocodiles on the island. Perhaps our community is learning that the illegal feeding of these apex predators is what makes them dangerous in the first place? Unfortunately, not everyone has “gotten the message” or respects the law, and once again the American Crocodile Education Sanctuary (ACES) has had to step in and relocate a crocodile from Ambergris Lake after a local restaurant began feeding it. “We have been receiving calls from concerned citizens that the crocodile was getting quite bold,” explained ACES Croc Wrangler Chris Summers. “It was obvious this croc had lost its fear of people and was now associating them with food. It wouldn’t run away when approached and showed no fear of people. This behavior makes for a very dangerous animal.”
A week ago ACES reported the problem to the San Pedro police and were told that a warning would be issued to the people who were guilty of feeding the croc. A fed croc will always be a safety issue, therefore ACES decided it was best to remove the reptile from the highly populated area. 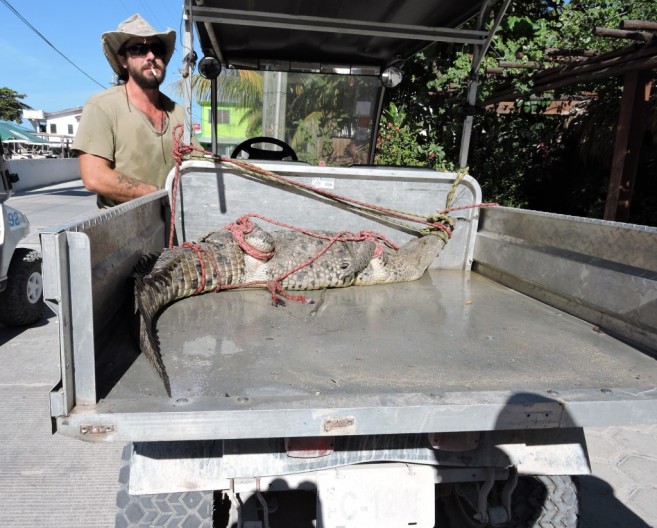 “We actually believe there are two crocs currently in the lake who have become accustomed to being feed, and yesterday (Jan. 20th) we managed to catch the smaller of the two. I am of the belief that this smaller croc is a pregnant female, and it is really a shame that she will be removed from an area where she was most likely planning to nest,” stated Summers. The captured croc, which according to Summers has been caught by ACES before, was transported to an uninhabited area far north of San Pedro Town and released. “We plan to go back to Ambergris Lake and get the other, larger croc as well. These animals are just too much of a risk in that area and as long as people continue to feed them they will grow even more dangerous.”

ACES First Mate Miguel Melendez prepares to release the relocated crocodile as a couple of tourists enjoy the photo op.

Saga says Thanks You for successful November Rice Cook-Off