A neighborhood watch is a group of neighbors who believe that fighting crime is every citizen’s responsibility. That theory was put to the test on Wednesday March 12th by the North Ambergris Caye Neighborhood Watch (NACNW) in the Tres Cocos area of San Pedro Town. The group, working along with other people in the area managed to detain a male identified as 22-year-old Juan Carlos Martinez and later a 17-year-old male minor, who police believe have been terrorizing islanders in the Tres Cocos area of the island. 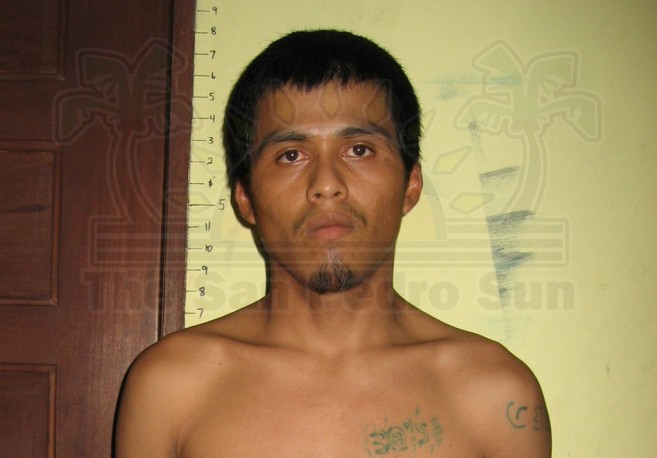 According to San Pedro Police, it all started sometime around 10:30AM on Wednesday when 31-year old Misty Plemons was in her living room. Her attention was drawn to a noise coming from her bedroom and Plemons told police that when she looked around, she noticed a male dressed in full blue with a rag tied around his face in her bedroom. The intruder allegedly closed the door and fled the scene through a window. Plemons then set chase behind the intruder later identified as Martinez, a fisherman of San Pedrito Area of San Pedro Town. According to local police, when Martinez realized that Plemons was chasing him and making noise to alert neighbors, he fired shots in her direction.

San Pedro Police told The San Pedro Sun that after firing shots at Plemons, he ran along with another companion who acted as an accomplice along the beach. What happened next was an act of bravery, but also proved that it takes a community to fight crime. NACNW members implemented a phone tree strategy by calling all the neighbors alerting them about the incident. NACNW members along security officers from a private security company and caretakers in the area conducted quick searches in the immediate area and intercepted Martinez and his minor companion. According to police, Martinez was seen throwing a fire arm in the sea. Residents in the area managed to pin him down, but the minor culprit managed to flee the area. San Pedro Police said that they immediately responded after they received information of the shooting incident and burglary in progress.

When police arrived in the area, the NACNW and private security personnel handed Martinez over to police. A quick search in the area also led to the arrest of the minor. Police also retrieved from the sea a .380 Browning Brand Pistol with 11 .380 live rounds which was taken as evidence.

San Pedro Police said that residents in the Tres Cocos area have been experiencing a number of burglaries and they strongly believe the two males are the ones who have been terrorizing the residents in the area. Both Martinez and the minor have been arrested and are expected to be charged for the incident and will be investigated for other similar incidents. Martinez, who is known to local authorities on the island, has been out of prison on bail after he was accused of an armed robbery on the island which is still pending before the court.

The San Pedro Police Department takes the opportunity to applaud the NACNW group for the excellent strategy employed that led to the successful capturing of both men.