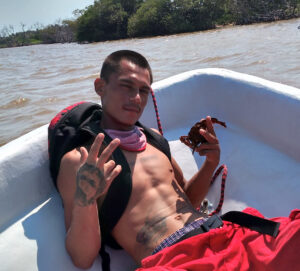 Initially reported as a shooting by residents in the DFC area south of San Pedro Town, police later clarified that the incident was a stabbing. Just after 4PM, on Wednesday, September 22nd, 26-year-old Jean Villatoro was stabbed in his left hand, after being attacked by two men. Villatoro was transported to the Dr. Otto Rodriguez San Pedro Polyclinic II, where he was treated and released.

Wearing a bloody white shirt with his left arm thickly bandaged, Villatoro was escorted by the police from the polyclinic to the station, apparently to give a statement. Police briefly shared that the two men accused of attacking Villatoro have been detained. If charged, they will be arraigned at the San Pedro Magistrate on Thursday, September 23rd.