A 52-year-old construction worker of San Pedro Town was formally arrested and charged on Tuesday, August 9th, for the crime of ‘Incest.’ The report was made on Monday, August 8th, by the victim and the mother. The victim, a 17-year-old minor, reported that her father had been having sexual intercourse with her up until she reached the age of 15.
Police investigation led to the arrest and charge of the perpetrator. He is expected to be arraigned at the San Pedro Magistrate Court.
How are sex offenders in Belize monitored?

The country has a national sex offenders registry with the support of the United States Agency for International Development through the Evidence-based Information Management on Citizen Security in Central America and the Dominican Republic Project. The United Nations Development Programme and the Ministry of Home Affairs and New Growth Initiatives are partnering, through the Belize Crime Observatory, to implement this initiative. 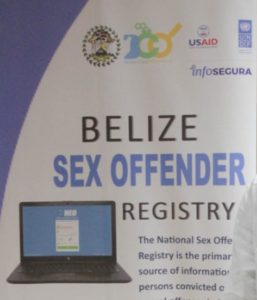 In 2014, the National Assembly passed amendments to Belize’s Criminal Code (Chapter 101 of the Laws of Belize). This allowed the establishment of the National Sex Offenders Database.
What happens after offenders serve their time in prison
According to the law, convicted sex offenders are to notify the police (either in person or in writing) of their name and any aliases, address, and any subsequent change of address, date of birth, and other particulars (such as occupation and place of work), as well as criminal convictions and corresponding sentences. The law further states that the failure of a sex offender to notify the authorities without a reasonable excuse can result upon conviction in a fine of up to BZ$10,000, a 5-year prison sentence, or both.
Sex offender details must be kept in the database for ten years or longer if specified by the minister
responsible for Home Affairs or the Commissioner of Police. The database is to be updated whenever new information is received.
In addition, the Superintendent of Prisons must notify the Commissioner of Police and the Director of Human Services as soon as a sex offender is released from prison after serving any sentence for a sexual offense.