« Older: Beach brawl involving a group of teenagers’ shocks islanders; no reports made to police 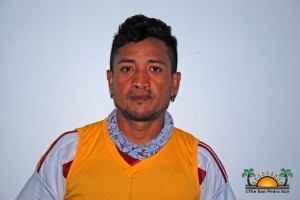 Another San Pedrano fell victim to gun violence on Saturday, December 11th. Hilberto Caliz, 36, a carpenter of the San Pedrito area, was ambushed and gunned down just a few feet from his home. The same day police apprehended the gunman, Julio Rafael Paiz, an 18- year-old unemployed  Belizean of San Pedro Town. On Monday, December 13th, police formally arrested and charged Paiz for the crime of Murder. He is to be arraigned in Belize City on Tuesday, December 14th. Paiz, a friend and co-worker of Caliz’s, reportedly threatened him and his girlfriend Emma recently over a bicycle issue.

The Caliz family is devastated and in disbelief of what happened to their beloved one. His younger brother, Edilberto Caliz, told The San Pedro Sun that his big brother had no problems with anyone. According to him, Hilberto had a drinking problem but long left that life and was on track to settle down and turn his life around. “He was never a bad person; he worried about everyone else,” said Edilberto. “My brother did not do anything to anyone; he was dedicated to working, is not fair what happened to him.” An emotional Edilberto said it would be a tough Christmas, but as a united family, they do the right thing and do not take justice into their own hands. They will leave the police to do their job and make the person responsible pay for the crime.

The motive – a bicycle

According to witnesses familiar with the issue, it all started with a bicycle. The accused had reportedly stolen a bike belonging to Hilberto and Emma. Hilberto confronted him about the bike, which led to threats to their lives. Emma was advised to file a report to the police, but they did not expect the situation to escalate to murder. According to her, Hilberto told her that it was just a young guy who would not do anything. That evening on Saturday, Emma said she was doing home chores when all of a sudden she heard the explosions. “I thought that it was pop shots (firecrackers), then I saw the neighbor running into his yard, and then I saw my bwai (partner) running,” she said. “I saw the person shooting him.

He dropped right there, and his attacker continued shooting him.” Witnesses said the gunman had emerged from behind a fence and made sure Hilberto was dead by shooting him several times, even when he was on the ground. The shooter tried to escape, but the police quickly detained him.

Hilberto is remembered as a good footballer, having played with Los Catrachos football club, the genesis of San Pedro Pirates Football Club. The island sporting community mourns his death and joins his family in denouncing the senseless crime. They say it is not fair what his own friend did to him, and demand justice.