An update from the Department of Environment (DOE) on the sailboat named ‘Ramblynn’ still stuck on the reef in the Tranquility channel area off the north coast of Ambergris Caye revealed that there is no damage to the coral reef. The vessel has been there since March 17th and reportedly only hit solid rock. The next step from DOE and the Belize Port Authority is to find a safe way to remove it before it could cause any damage or obstruction to other navigators. 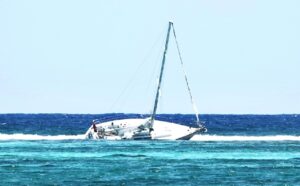 According to a representative from DOE, because the 35-foot boat did not damage any coral, no fine has been issued to the vessel’s owner. The owner is a Canadian national Glen Peter, who ran aground on that section of the barrier reef on March 17th while traveling south from Mexico. Peter was en route to Guatemala, and when attempting to navigate the Tranquility channel, his sailboat got stuck. 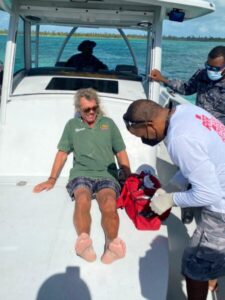 He asked for help, and the Belize Coast Guard responded to his distress call. Peter was also assisted by the Rickilee Response and Rescue or Triple R crew. After his health was assessed, Peter was brought to shore, and an investigation started. It has been over a month since the incident. The Belize Port Authority said they are working on finalizing arrangements to get the appropriate equipment to this barrier reef area to remove the sailboat safely. However, that may not be necessary as Peter, who has returned to his country due to health issues, is making such arrangements. An update from DOE indicates that Peter has hired a private company to remove the boat. The delay so far is due to non-favorable conditions at sea. He hopes that with the weather’s cooperation, the job can be done this week.

This is not the first sailor to end up stuck on the reef while navigating at night. In most cases, the boat captain is attempting to access San Pedro Town via one of the few channels within the barrier reef. The local boatmen know where these are, even at night. However, foreign seamen have difficulty finding these channels. If the sea is choppy with an increase in wave action, the vessel can land on the reef, where most of the time, it causes extensive damage to the coral and remains stuck until it can be removed.