The international stars of the festival are already on the island, with DJ Osocity arriving on Wednesday, June 22nd. The trendy DJ visited the island’s children’s home and community center, Hope Haven, where he spent some time with the staff and children. Later in the day, he met with the delegates vying for the Miss San Pedro title at El Fogon restaurant. The renowned DJ will be performing following the pageant on Friday evening. Belizean DJs like DJ Dalla, Cloud 9, DJ Bigz, and DJ Shyfta will also perform. 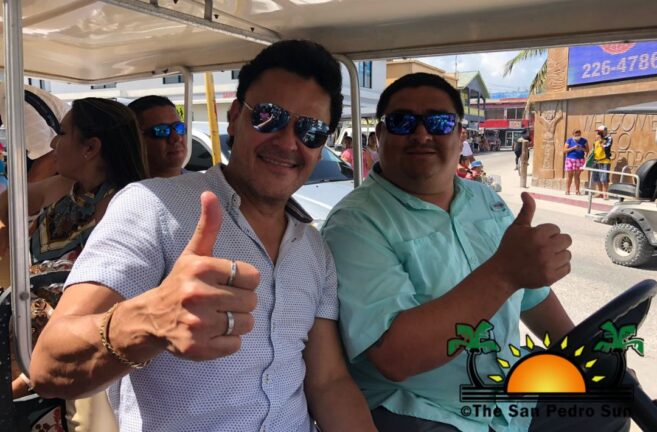 The festival will feature its ‘International Night,’ with popular Mexican singer Pedro Fernandez on Saturday. He arrived in San Pedro Town on Thursday, June 23rd, via Tropic Air, where dozens of fans flocked to Tropic Air to cheerfully greet and welcome him to the island. Many took pictures with the famous singer, and he thanked all his fans and invited them to the concert on Saturday.

Mayor Gualberto ‘Wally’ Nuñez welcomed both international stars along with his Deputy Councilor Adaly Ayuso and other Councilors and staff from the San Pedro Town Council.

Contrary to other years, when the religious activities and festivities commemorating Dia de San Pedro were done at the same time, they will take place on separate dates this year. On June 29th, a traditional fishermen’s mass and breakfast will occur at 4AM at the San Pedro Roman Catholic Church. After that, a boat procession will take place at 6AM, beginning from the municipal dock and ending on the lagoon side of the island, where Father Eduardo Montemayor will bless the boats and the fishermen.

The annual festival is held in honor of St. Peter (San Pedro), the Patron Saint of fishermen on the island.