« Older: Letter to the Editor: Would anyone go to this bar?
Newer: » 2017 September Celebrations officially begin 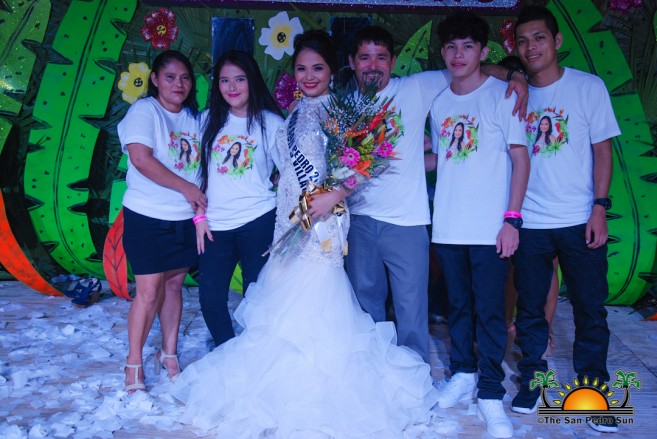 San Pedro Town has a new beauty ambassador, who was selected during the annual 2017 Miss San Pedro Pageant on Saturday, September 2nd. Held at the Honourable Louis Sylvestre Sporting Complex, the pageant saw five lovely contestants vying for the coveted title in a show full of creativity, poise and elegance. When all points were tallied, it was 18-year-old Virginia Vasquez who had charmed and captivated the judges becoming the new queen of the island. 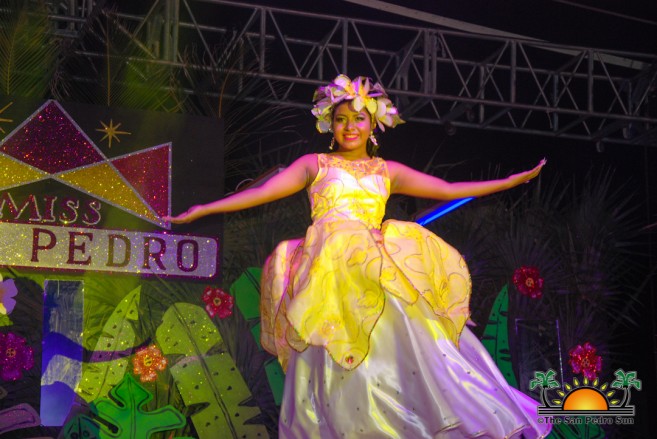 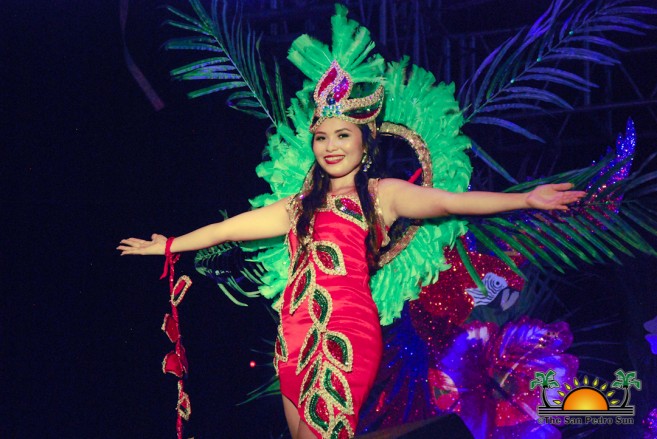 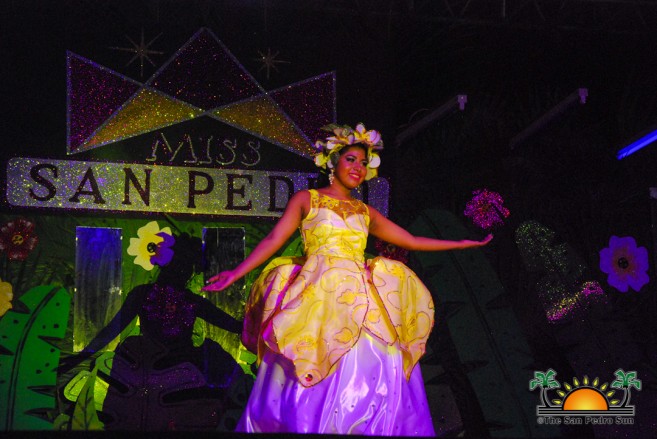 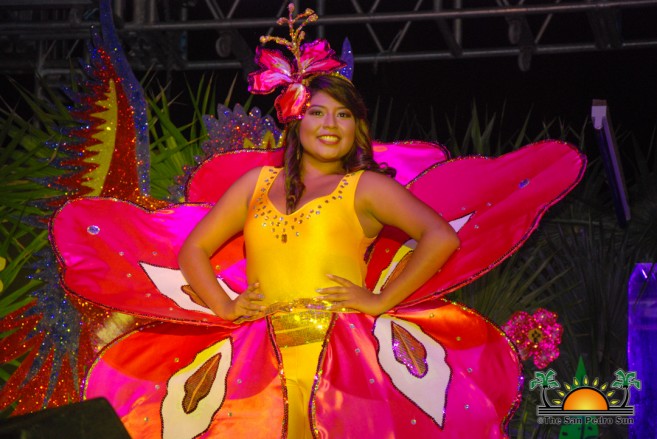 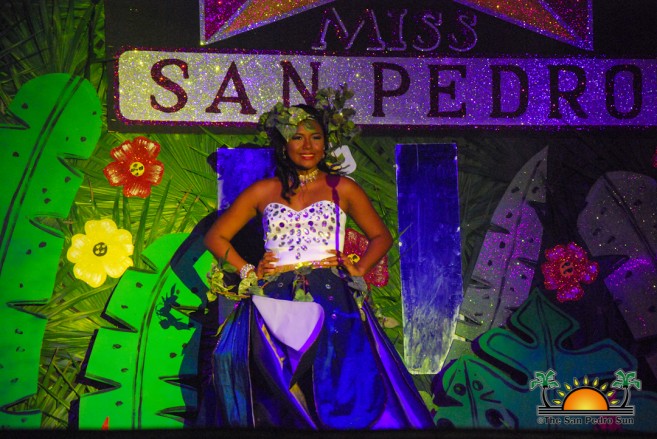 The pageant started promptly at 8PM, before a large crowd of attendees who came to enjoy the show and support their favourite candidates. After the National Anthem was sung, each contestant took centre stage to introduce herself. Master of Ceremonies (MC) Eiden Salazar Jr., assisted the candidates in sharing a little bit about themselves and some of their aspirations in life. This year’s pageant contestants were Nurian Trujillo, Virginia Vasquez, Viviana Paredes, Tanisha Rhaburn, and Nailea Kotch. 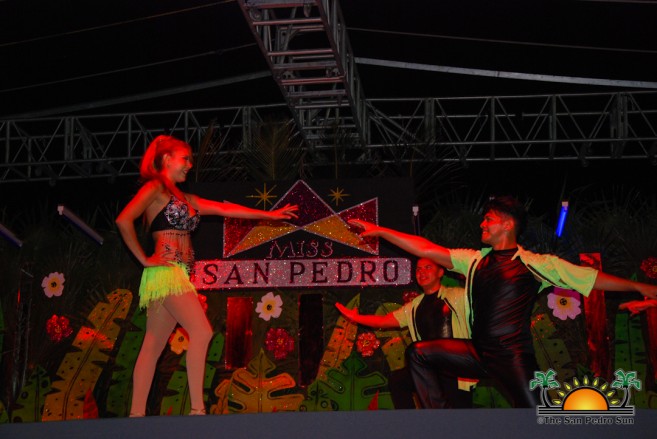 After their introduction, the contestants retreated to get ready for the first official segment of the evening. During the intermission, Grupo Crash from El Salvador took the stage to perform. The group’s unmistakable and well known number of dances kept the audience well entertained. 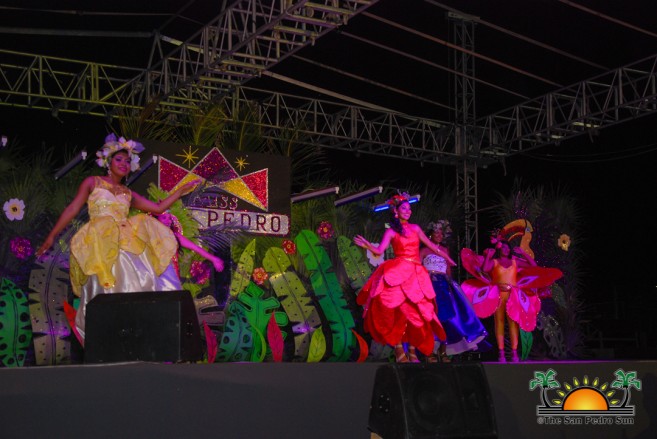 Following that energetic performance, it was time for the costume segment of the show. The elaborate costumes portrayed the rich flora of Belize. Each contestant graced the stage sharing key knowledge of their costumes representing the beautiful native flowers found in Belize. The audience, applauded loudly in support of their favourite candidate. At the end of the segment, the girls slipped away to prepare for their second segment.

The competition was fierce, and selecting the new beauty ambassador was up to judges Jacinta Gomez, Camila Black, Hector Rodriguez, Jasmine Hartin, and Kevin Mendez. They were charmed and impressed by each performance, and choosing a clear winner would be hard. 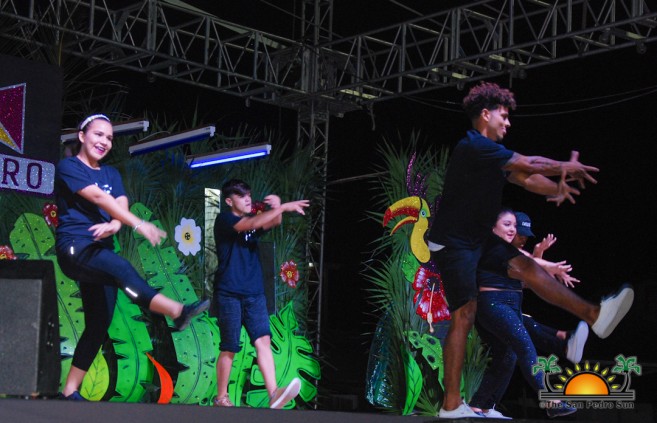 After another dance number, this time by the San Pedro Dance Company, the contestants modeled their swimwear. 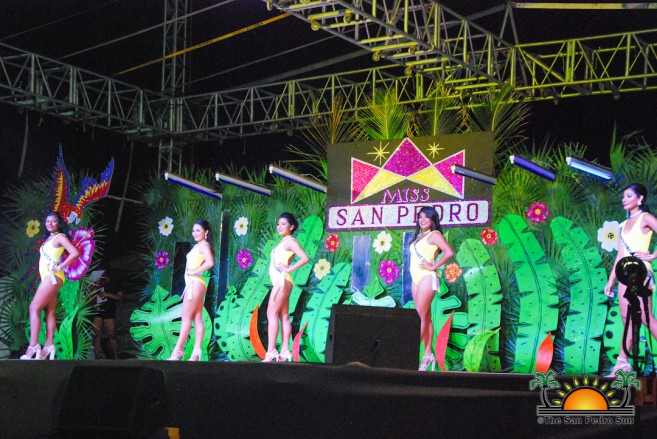 Each contestant drew much applause from the audience, and their smiles lit up the stage. Grupo Crash took to the stage for another spectacular performance as the young ladies got ready for the most anticipated part of the show, the evening gown segment. 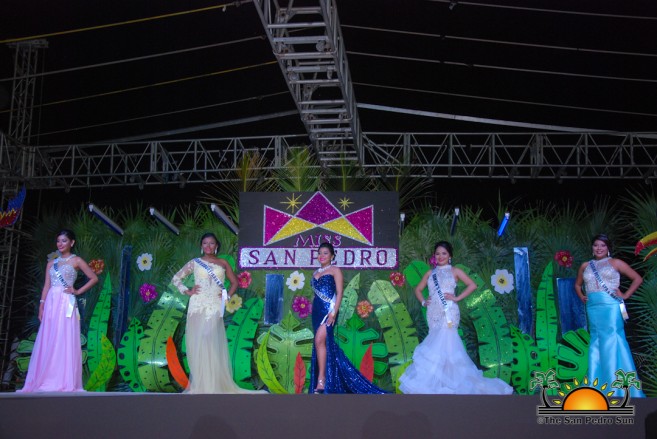 Dressed in stunning gowns, each contestant graced the stage and awed the crowd. The colourful, and glamorous dresses topped off by the girls’ bright smiles had everyone captivated. MC Salazar then transitioned into the final part of the show; the question and answer segment. The questions ranged from tourism, peer pressure, social media and even the pageant itself. Each candidate confidently answered to the best of their knowledge. 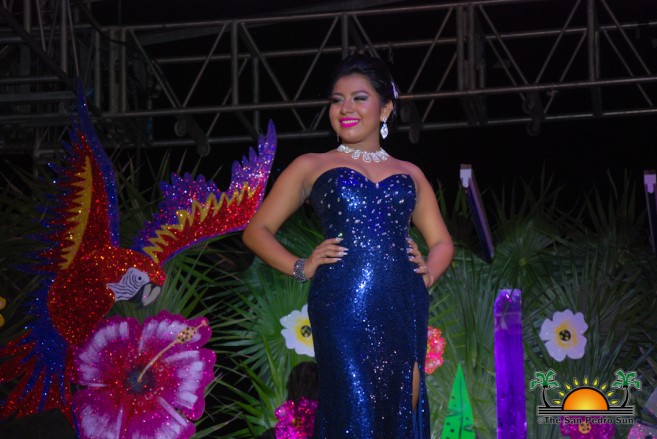 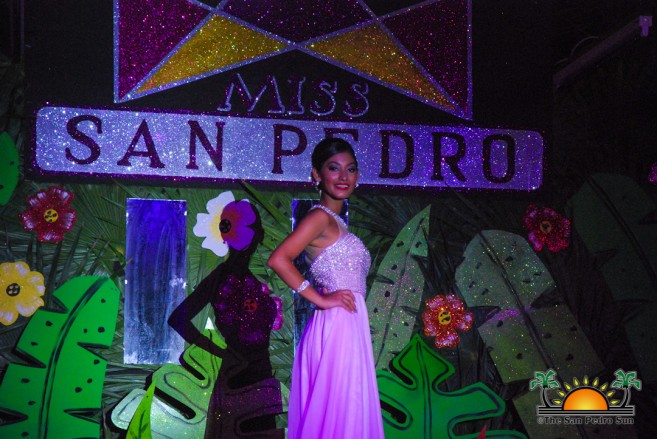 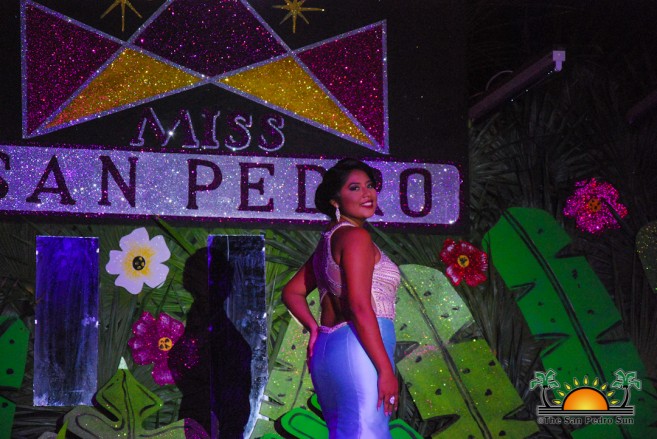 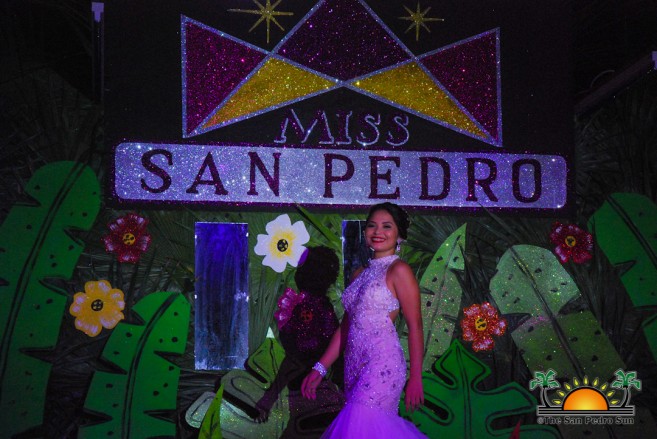 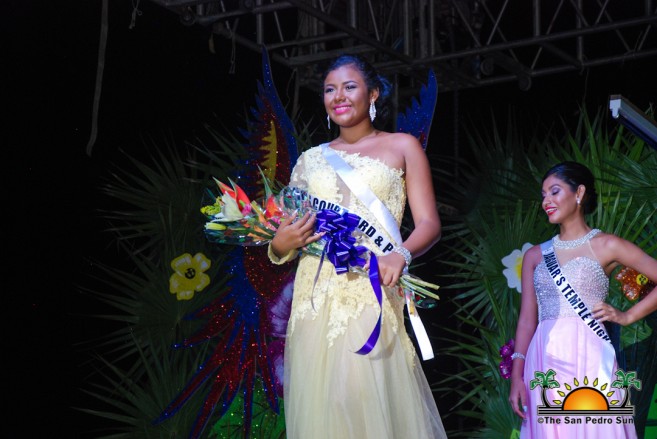 While the judges’ scores were being tallied, Grupo Crash gave their last performance for the night. This was followed by the final walk and speech of outgoing Miss San Pedro Lisandra Novelo. An emotional Novelo thanked the entire community for their support during her reign, and she wished her successor the very best. Salazar then began announcing the various prizes up for grabs. The title of Miss Congeniality went to Nurian Trujillo, while this year’s Miss Photogenic went to Tanisha Rhaburn, who also won the title of first runner-up. Rhaburn will take up duties of the winner in the event that she cannot continue to do so. 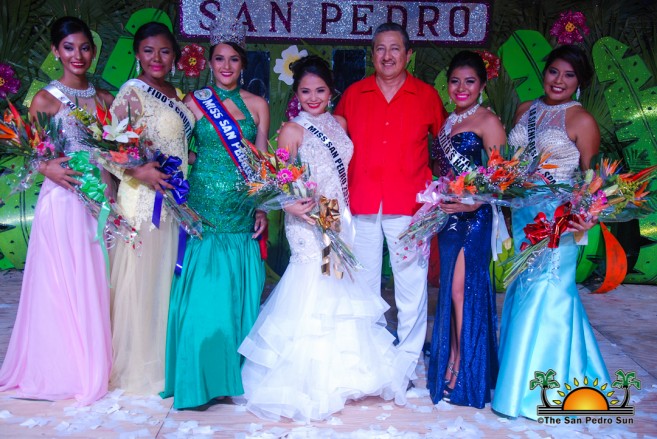 To the beat of drumrolls, and much applause from the audience, the new Miss San Pedro 2017-2018 was announced. 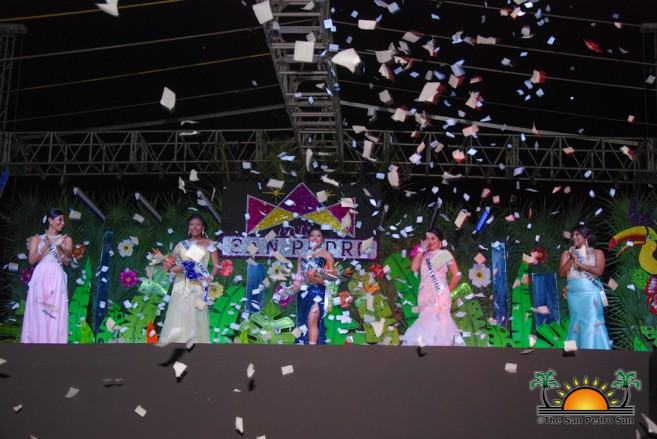 Virginia Vasquez, sponsored by Ramon’s Village Resort, is San Pedro Town’s new beauty ambassador. After being sashed and presented with her bouquet Vasquez shared a few words with the crowd. “Make God your best friend, that is the way that you will succeed and all your dreams will come true; God first!” 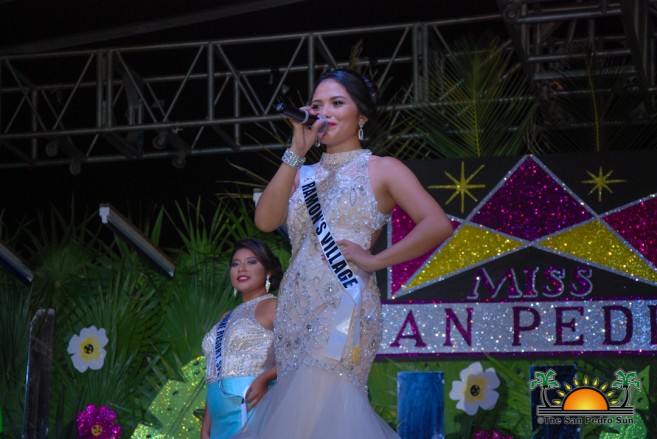 Vasquez will be officially crowned on Sunday, September 10th, during the first event of the patriotic festivities of the September Celebrations. The San Pedro Sun joins the entire island community in congratulating Vasquez and all the other contestants for another memorable show.