Theft
*At about 5:41PM on Friday, January 23rd, 40-year-old Martin Thomas, owner of Moncho’s Golf Cart rental, visited the San Pedro Police Station. He reported that he rented a white 4-seat golf cart with license plate number SP-C-2540, V.I.N. TG1312353958 with markings 91 on both side of the cart on Wednesday, January 21st to Brian Clark. On Friday, January 23rd Clark reported to him that the golf cart was stolen from him on the day before while parked on Coconut Drive. The estimated value of the golf cart is $15,000BZ. Police investigations continue. 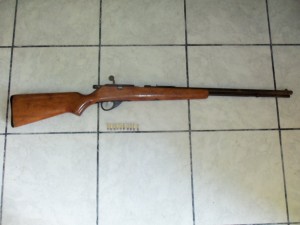 *On Friday, January 23rd at around 7AM, acting on Special Branch Intelligence, a team of San Pedro Special Branch and Criminal Investigation Branch personnel conducted a searched in some mangroves within an abandoned lot in the San Pedrito Area. The search led to the discovery of a .22 JC Higgins bolt action Rifle Model 43, Serial Number unknown, along with 10 live rounds of .22 Ammunition Aguila brand, within the chamber of the said firearm. The rifle and ammunition was taken to the San Pedro Police Station where it was labelled as found property.

Burglary
*On Monday, January 26th at around 4:45AM, 51-year-old Todd Blankenship a retired American visited the San Pedro Police Station and reported that on Sunday, January 25th at approximately 11:00PM he secured his home before going to bed and when he woke up the other day at around 4AM he noticed that the screen of one of his living room windows were flapping in the breeze. He explained that he made checks and noticed that two iPhone 5s valued at $1000BZ each, one Apple iPod valued at $600BZ and a Mifi Hot Spot valued at $150BZ were missing, totalling at $2750BZ. He made further checks around the house and noticed that the back door of the house was unlocked. He then went into the yard and noticed some marks on a large concrete pillar that supports the balcony that the intruder climbed to get access to the window that was broken into. Police investigations continue.

Wounding
*On Monday, January 26th at about 2:38PM, 22-year-old Edvin Lopez of D.F.C Area, visited the San Pedro Police Station and reported that at about 12:30AM on the same date he was wounded. He stated that he was along with Daniel Tzib and another friend who he only knows as “Oscar travelling on a golf cart in the D.F.C area being driven by Tzib. He stated that while passing in front of an apartment complex, he noticed three men of Hispanic descent riding separate bicycles. He further stated that they stopped the golf cart and asked the three men why they were taking Chaparro`s bicycle. He and his two friends then got off the golf cart and saw one of the men take out a knife from his knap sack and told him that if he does not leave he is going to stab him. As a result, he and his friends went back on the golf cart after the man with the knife had threatened them. He and his friends quickly drove off on the cart and stopped at a deli. The three guys that were on bicycles followed them and the man with the knife then reportedly came up to Lopez and stabbed him on the left side of his abdomen. He then ran towards the beach while his friend Tzib was being beaten by the two other men. He then left the area to seek medical attention where his injury was classified as “wounding”. Police investigations continue.

Unlawful Sexual Intercourse
*A 15-year-old of San Pedrito Area visited the San Pedro Police Station in the company of her mother and reported that on December 24, 2014, at around 11:30PM she accompanied her boyfriend to his home which is located in the San Pedrito Area where he proceeded to have sexual intercourse with her. She further stated that on Thursday, January 22nd her mother accompanied her to the Dr. Otto Rodriguez San Pedro Polyclinic II where doctors performed a pregnancy test which came back as positive. A medical examination was performed that confirmed that she is four weeks and three days pregnant. Police have since detained 21-year-old Edilberto Caliz of San Pedrito Area pending charges of “Unlawful Sexual Intercourse”.

Sexual Assault
In reference to a sexual assault incident reported on May 20, 2014 at the Amigos del Mar dock, San Pedro Police have reported that the accused, Gerson Cordon was found guilty of the charges and sentenced to five years imprisonment at the Belize Central Prison.