Theft
63-year-old Thomas Vidrine reported that on Friday, May 22nd at about 3:15AM he received a call from 26-year-old Julio Rafael Ruano telling him that his boat was being stolen. He immediately got up and grabbed his licensed .38 special revolver and went outside, when he reached outside, he saw that his boat was about 20 feet away from the dock where he had it secured. He then saw a small wooden dory with a male person in it pulling the boat further away. Ruano immediately called the police who arrived about 20 minutes later. He gave the police the keys of another boat and they went out and were able to retrieve the said boat and detain the male person who he immediately recognized, since he had bought plants from him and had even loaned him one of his properties so he and his wife could build up a restaurant about three years ago. The boat is a white and blue hull with a white deck fiber glass skiff with registration number SPR0147, 20 feet long, with the name “Min Min”, which can be seen on both sides of the boat, value of the boat is $ 18,000BZ. It has a 15 pound anchor with 100 feet line valued at $40BZ, eight life jackets valued at $20BZ each, a fire extinguisher valued at $30BZ, 1 Ritchie brand compass and battery valued at $16,400BZ, and a 115 Yamaha outboard engine bearing s/n:6E5L1024231 valued at $18,000BZ, for a total value of $46,630BZ. He had last seen his boat at 5PM on Thursday. May 21st on the dock where he always had parked and secured it. Following investigations, police arrested and charged 45-year-old Armando Paguada and 30-year-old Noel Polanco for “Theft”.

Sexual Assault
On Saturday, May 23rd at 12:20PM a mother and her 8-year-old daughter visited the San Pedro Police Station and reported that earlier in the day, while the child was lying in a hammock at her grandmother’s house located in the DFC Area, her grandfather sexually assaulted her. She further stated that he had sexually assaulted her on several occasions since June 2014. On Monday, May 25th police arrested and charged the grandfather for two counts of “Sexual Assault”. The name of the sex-offender is being withheld to protect the identity of the victim.
San Pedro Police urge all sexual assault, rape or molestation victims to report incidents as it happens.
Drug Trafficking 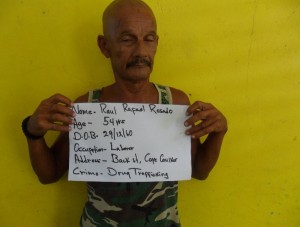 On Wednesday, May 27th at 1:30PMs, acting on intelligence from San Pedro Special Branch and Criminal Investigation Branch, a team of Caye Caulker Police headed by PC #577 Santiago Tun conducted a searched on 54-year-old Raul Rafael Rosado whom was seen leaving with a brown manila envelope from the Caye Caulker Water Taxi Terminal in Caye Caulker Village. The said parcel was open in his presence which was observed to contain three small transparent plastic bags containing a white color substance suspected to be crack cocaine amounting to 21.1 grams. He was formally arrested and charged for drugs trafficking.