Drug Trafficking
* On Friday, April 10th at about 5:15PM Police Constable Steve Ferguson along with PC Zayne Palacio and other police officers were on mobile patrol in the San Pedrito Area when their attention was drawn to a male person in the immediate area. As a result, PC Ferguson approached the individual and informed him that he was going to be searched. The individual was identified as Anthony Westby. The search led to the discovery of two transparent plastic bags: one containing a white powdery substance suspected to be cocaine and the other containing a green leafy substance suspected to be cannabis. Westby was informed of his offense and arrested. He was then escorted to the San Pedro Police station where the drugs were weighed amounting to 1.46 grams of suspected cannabis and 2.19 grams of suspected cocaine. Westby was officially charged for one count of “Possession of Controlled Drugs” and two counts of “Drug Trafficking”.
*On Tuesday, April 14th at around 13:30PM, the San Pedro Strike Team conducted a search in an apartment in the San Pedrito Area. The search led to the discovery of 83 grams of suspected cocaine already packed for sale. Five men were present at the time of the search: 45-year-old Cyril Joseph Wade, 34-year-old Richard Adderly, 40-year-old Edmond Alvarez, 26-year-old Edwin Goody and 20-year old Joel Young, all of Belize City address. All men were escorted to the San Pedro Police Station where they were formally charged for the crime of “Drug Trafficking”.


Burglary
* On Wednesday, April 8th at about 10:37AM, 38-year-old Randy Staine visited the San Pedro Police Station and reported that sometime between 3PM Friday, March 27th and 6PM on Monday, April 6th while he was at Chetumal, Mexico for the Easter Holidays, someone broke into the garage of the house he manages and stole the following items: one black in color LG Radio valued at $500, one black in color 19 inch Precision LCD TV valued at $600, one silver in color Casio Men’s Watch valued at $400, one gray and black in color battery charger and compressor valued $900, one socket set, one spanner set, one screw driver set, one pliers set all Stanley Brand valued at $2,300, one set of bicycle tires and rims valued at $300, one red and gray in color porte cable brand skill saw valued at $800, two power drill Dewalt brand valued at $1,800, two battery drill Dewalt brand valued at $1,800, one black in color Panasonic brand DVD player valued at $125 along with 100 DVD’s valued at $4 each and one black in color carry-on suit case valued at $175.and a number of assorted clothing at a total value of $10,100. Staine has no suspects and requested court action if anyone is found with the items. Scene was visited and processed, it was observed that the garage building was of wooden structure, also observed that culprit(s) gained entry into the garage by breaking off the padlock of the garage door facing a westerly direction. Any information on the stolen items are to be reported to the San Pedro Police Department at 206-2022.
Robbery
* On Saturday, April 11th at about 11:45PM, 19-year-old Israel Ortiz visited the San Pedro Police Station and reported that he was robbed by two male persons. Ortiz reported that at about 9:15PM he was walking in the San Mateo Area to visit he father when he was approached by two male persons whom he recognized. Ortiz stated that he was familiar with one of the male person whom he knows only as Carlos. Ortiz stated that Carlos started beating him in the face and body while the other male person choked him until he passed out. When he woke up while being assisted by a friend he noticed that $244 cash was missing along with his black in color Samsung Galaxy S3 cell phone with a 16GB memory card totaling at a value of $602. Ortiz was shown some photos of the possible suspects and he positively identified two male persons: Carlos Gabriel and Franklin Gabriel. Both men were officially arrested and charged.
Attempted Murder 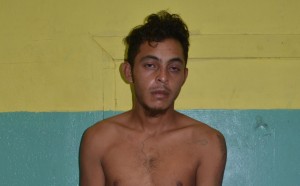 *In reference to a report made by Jaime Manzano Jr. on March 4, 2015 police have arrested and charged one man for the crimes of attempted Murder, Grievous Harm, Use of Deadly Means of Harm and Aggravated Burglary. On Thursday, March 12th police formally arrested and charged 25-year-old Pablo Kumul for having shot Manzano during a home invasion n Wednesday, Mach 4th. Kumul has since been remanded to the Belize Central Prison.