Recovery of Stolen Goods
*On Tuesday, September 1st at 3:15PM, acting on Special Branch information, a team of Criminal Investigation Branch and Special Branch personnel conducted a search at an apartment in the San Pedrito Area, San Pedro Town, which led to the discovery of a stolen white and gold Apple brand Iphone 6 valued at $600US. The said phone was reported stolen along with other items from three American Nationals of North Carolina, USA during a burglary which occurred on the July 19, 2015. Matter remains under investigation.
Aggravated Assault
*23-year-old Diatri Cacho reported that on Monday, August 31st at about 8:30PM while he was at his house in the DFC Area, a male person known to him only as “J”, arrived at his house pointing what appeared to be a chrome and black .9mm pistol. “J” told him “I just the come show you”. Cacho feared for his life and asked the man to bring down his arms. Instead “J” cocked the firearm and pointed it towards his face and then slowly backed away. Cacho then immediately called police for assistance as he feared for his life and that of his family. The culprit was later identified as 31-year-old Joseph Pariott, and he was arrested and charged.
Drinking Alcohol in a public place
*On Saturday, September 5th at around 4:15PM, PC #1661 Kyle Serano and PC #1793 Victor Salam were conducting a mobile patrol on Angel Coral Street. Serano’s attention was drawn to two male individuals sitting on the corner of Angel Coral and Pelican Streets. One of them had an open beer bottle in his hand about to drink for it and the other man had just place his beer bottle on the ground. Serano approached both men and learnt that their names were Santos Garcia and David Tzul. Upon further inspection, Serano observed that both bottles were still full and slightly cold. There was also a transparent bottle of Caribbean Rum which was almost finished behind Tzul’s right foot. When asked if the bottle of rum belonged to him, he answered yes. Serano informed both men of the offence committed and escorted them both to the San Pedro Police Station. Both men were detained and formally charged for “Drinking Alcohol in a Public Place”.
Burglary
*35-year-old Venancio Tillett reported that on Saturday, September 5th at around 7PM, he closed his business located on Sea Grape Drive, securing all doors and windows. On Sunday, September 6th at 7:30AM he went to the business and noticed that the lock of the front door was damaged. Upon inspection he noticed that one of the glass louvers of the back window was removed. He went inside and noticed that six yellow and blue spears, valued at $70 each, and five dive masks, valued at $80 each, were missing. The property stolen amounted to $820BZ. The items were later located by the San Pedro Police.
Robbery
*44-year-old Jonathan Reyes, employee of Caribeña Fuel Station, reported that on Friday, September 4th at about 7:20PM he was robbed. Reyes stated that he and his coworker, 39-year-old Aroldo Mesh, were standing outside under the shed beside their assigned fuel pump when two dark skinned men approached them. One of the men was armed with a .38 revolver. The men demanded Reyes and Mesh hand over their pouches containing money from gas sales. Fearing for their life, they obliged. One of the pouches contained $300 while the other contained $500 in different denominations. The robbers then made good with their escape along with the $800 cash. Police visited the scene and video surveillance was viewed. Wanted for the crime are 19-year-old Garry Young and 25-year-old Kevin Young.
Kept firearm without a gun license
*On Monday, September 7th around 4:10PM, San Pedro Police escorted detainee 31-year-old Joseph Pariott of DFC area, San Pedro Town to his home on Marina Drive in the DFC Area based on information that Pariott had an unlicensed firearm hidden near his house. A search was conducted, where approximately 100 feet from his house in some bushes police located a Black and Chrome .9mm Pistol Jennings Brand Serial number 1575285 with an empty magazine. Pariott has been detained pending charges.
Wanted 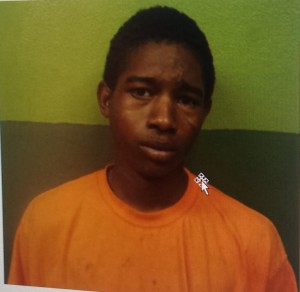 *San Pedro Police are looking for Ernesto Bernardez under shooting and robbery investigations. Anyone with information of his whereabouts is to contact the San Pedro Police Station at 206-2022.
Burt Golf cart 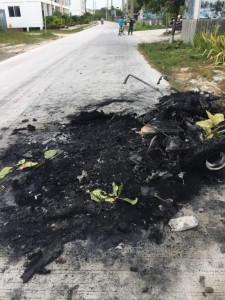 Early on Saturday morning, September 5th, reports came from the Tres Cocos area in Northern Ambergris Caye that a golf cart caught fire. According to the reports, the fire gutted the golf cart completely. The San Pedro Fire Department were made aware of the incident, and reports are that the occupants of the vehicle were intoxicated. They were asked to visit both the Police and Fire station to make a report, but up to press time have not done so.

Repeated complaints lead to the transfer of a Corporal