21 candidates in the race for SPTC elections


Nomination Day was held in nine municipalities countrywide including San Pedro Town. There are officially 21 candidates that have submitted their names to contest the March 4th municipal elections in San Pedro Town. The People’s United Party (PUP), the Vision Inspired by the People (VIP) and the United Democratic Party (UDP) each filed seven candidates for nomination on Wednesday February 11th. The seven candidates of each team appeared before Election Officer, Miriam Cod-Pott and Returning Officer, Colin Griffith at the San Pedro Town Council, where they were officially nominated by two registered voters of San Pedro Town electoral division.

First to arrive to be nominated were the seven candidates of the PUP. The candidates and their supporters had assembled on the beach front of incumbent Councilor Gualberto “Wally” Nuñez. Once they had gathered their supporting crowd, they paraded through the principal streets of San Pedro Town. 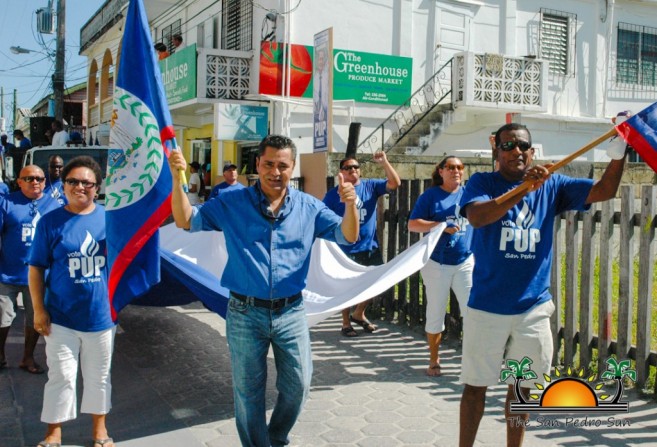 They were in to show their strength and by all appearance, they did not lack energy as the supporters honked horns and blasted music in the grand old style of the PUP. They eventually came to a stop in front of the San Pedro Town Council on Barrier Reef Drive shortly around 10:30AM, still full of energy. 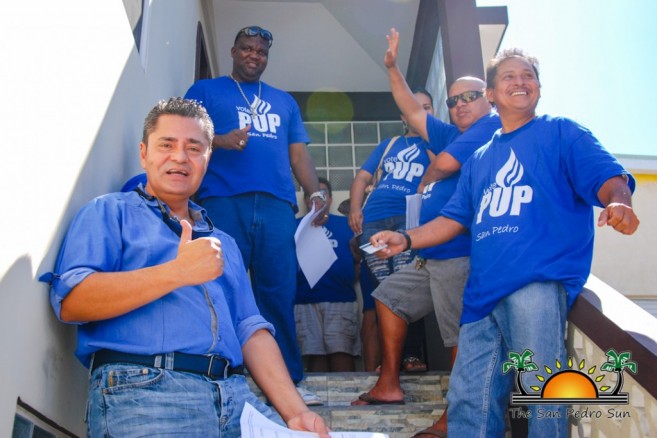 
Following the nomination, PUP Mayoral Candidate Dr Solorzano addressed the crowd that had awaited the PUP 7 team to be nominated. “We want to take the opportunity to thank our supporters for coming out in full force. It is an indication that people truly want to see a change. This is the first step to victory because on March 4th we are going to take over the helm of the municipality,” explained Solorzano who was flanked by PUP Standard Bearer Elito Arceo.The PUP has lost the four past municipal elections and has been serving as municipal opposition for the past 12 years on the island. 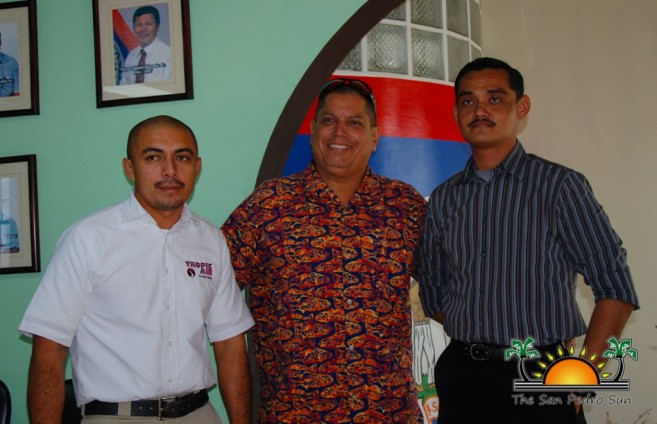 Shortly around 12:30 the VIP candidates made to the SPTC building along with a few family members. , they entered into the town hall to be nominated. Candidates for the VIP include Mayoral Candidate Robert “Bobby Lopez, and councilor candidates Mary Boiton, Francisco Salgado, Fatima Aragon Reyes, Amalio Requeña, Virginio “Bill” Henkis and Martin Dawson. The candidates nominated each other except for Henkis who was nominated by his two daughters Yanira Henkis and Melissa Henkis.
In addressing the media, Lopez blasted the both the PUP and the UDP for neglecting the island. “It is time to get rid of the two political parties. Ever since we gained self-government, we have had the same of both parties. They have enriched themselves, leaving the Belizeans deeper into poverty. This VIP team is giving the islanders an option to vote out corruption.” 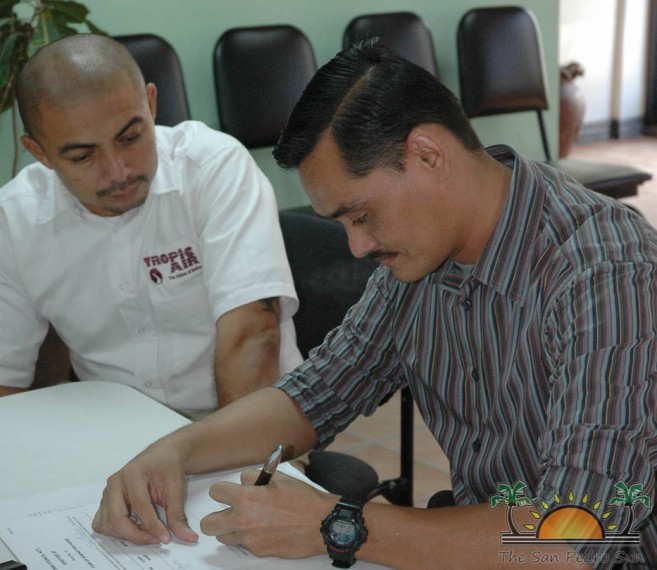 This is the first time that the VIP has introduced a full slate to contest a municipal election in San Pedro Town. (Read full story on Page 19) 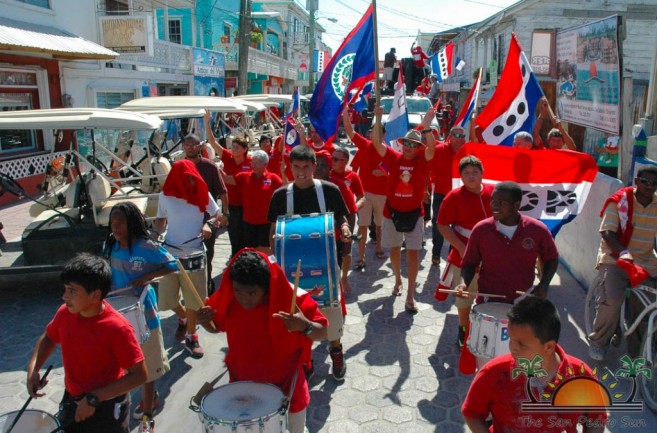 The incumbent United Democratic Party were third to make their appearance. They assembled in front of Central Park and after mustering their crowd, the red team marched through the streets of San Pedro. Accompanied by loud music, the crowd, who was in a celebratory mood, eventually made its way to the San Pedro Town Council. After arriving around 2:30PM, one by one, each member of the UDP 7 walked up to the office of the Town Council to be nominated. 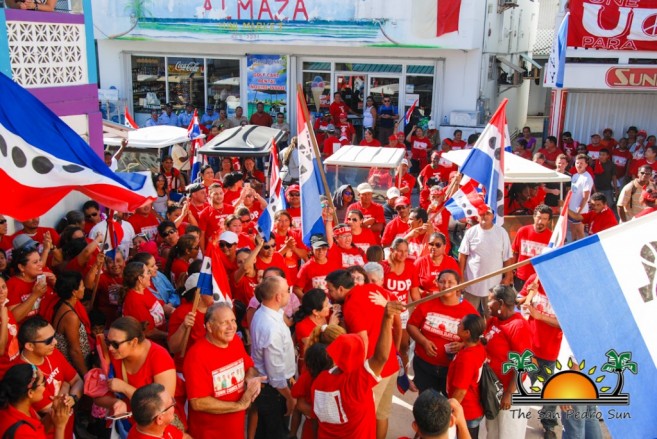 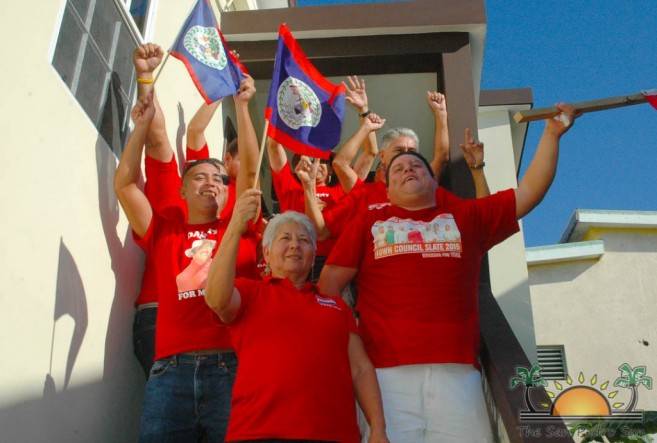 In his address to the gathering Guerrero said that progress must continue. “We are happy for the support and it is indicative that the people of San Pedro want progress to continue. There is more to come under the leadership of our Prime Minister Honorable Dean Barrow, our Area Representative Honorable Manuel Heredia and your UDP town council. Let work continue, let progress continues,” stated Guerrero. He was flanked by Minister of Tourism Hon Manuel Heredia Jr.
With the nomination officially over, 21 candidates will now officially be on the ballot for March 4th. It will be a historic election for San Pedro since there has never been three full slates contesting a municipal election. Electorates will be able to vote for one mayor and up to a maximum of any six councilors.