As Deputy Prime Minister Gasper Vega is set to retire, the United Democratic Party (UDP) held a critical meeting to determine the date for the convention that will elect the first deputy leader. The UDP Deputy Leadership Convention is scheduled for May 29th at the grounds of the Institute for Technical and Vocational Education and Training (ITVET) in Belize City, where voters across all thirty-one constituencies are expected to cast their ballots. The party’s application process was officially closed on Friday, April 22nd, and Minister of Education and Collet Area Representative, Honorable Patrick Faber, and Minister of National Security and Belmopan Representative, Honorable John Saldivar, are the only confirmed candidates to run for deputy leader. In hopes to win the election, both candidates have launched their campaigns and are actively seeking support. 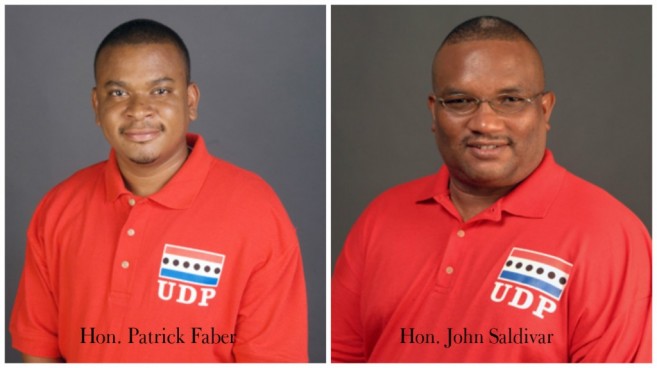 Faber notes that he would like to be in charge of preparing the party for a fourth consecutive general election victory. “My agenda is to become deputy leader of this party so that we can organize it in such a way that we can continue the legacy of the Right Honorable Party Leader Dean Barrow, make history, and continue to deliver good governance to the people of our beloved nation,” said Faber. In regards to funds for the campaign, Faber says he has accepted funding from certain friends, business owners and other donors. However, he also stated that he is using some of his own money, and that persons contributing to his campaign should not expect to receive any favors.
On the other hand, John Saldivar has obtained a wide range of endorsements by building his campaign around the many known representatives and standard bearers. He recently had an endorsement from candidates such as Tracy Taeger Panton from the Albert Division, Beverly Castillo from Belize Rural Central, and Dr. Carla Barnett from Freetown. Salidivar recently hosted a function on Friday, April 22nd in Belize City, where over three hundred delegates from across the country gathered at the Radisson Hotel for the launching of his campaign music video and song. He mentioned the participation came from at least half of the constituencies in the district and almost all of Belize City.
Deputy Prime Minister Gaspar Vega and Prime Minister Right Honorable Dean Barrow have not shown a public preference for the elected candidates, but Vega is privately suggested to be in favor of Saldivar.