After an excellent performance in the 2014 Annual Bart’s Bash International Regatta, Belize had its sailing reputation to defend! And on Sunday, September 20th at 9:30AM, 26 sailing vessels manned and crewed by Belizeans were at the line when the horn sounded the start of 2015 Bart’s Bash Belize in the waters off Caribbean Villas Hotel in San Pedro. The day saw superb sailing action, even in the unfavorable weather conditions. 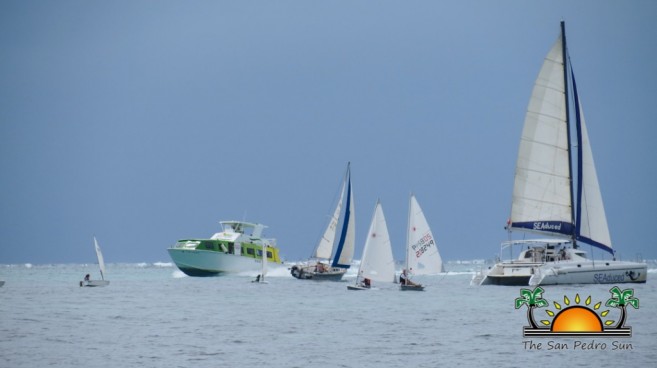 First launched in 2014, Bart’s Bash Regatta is a legitimate international sailing race for sailors from all over the world and in every kind of sailboat. On a designated date, sailors take to their home waters and sail courses that have been designed via computer program at the hands of the Bart’s Bash Committee. The Guinness Book of World Records recorded last year’s inaugural Bart’s Bash as the largest sailboat race in history. Created to commemorate a champion sailor and philanthropist, Andrew “Bart” Simpson and to support the Andrew Simpson Sailing Foundation, Bart’s Bash is a unique sailing regatta that unites sailors from all over the world. Bart lost his life at age 37, practicing aboard Sweden’s 72-foot America’s Cup catamaran that cartwheeled in preliminaries on San Francisco Bay, California on May 8, 2013. 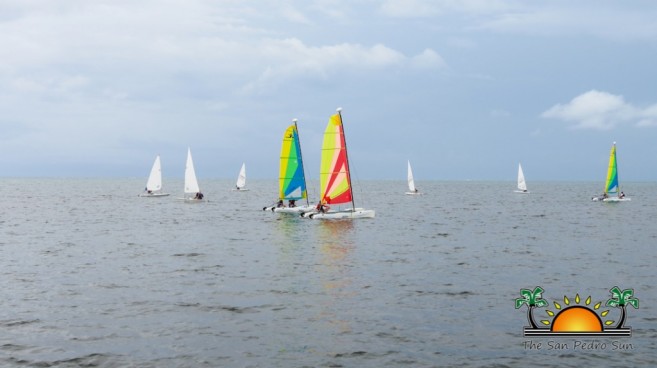 In the 2014 race, all of Belize’s sailors finished in the top 15% of the record-setting 16,780 entrants. The Belizean children aged eight to 15 who sailed Optimist Dinghies last year, all finished in the top 8% of the 1,174 competing in their class. This performance stunned the sailing world and encouraged Belizeans, such as those who are members of the Belize Sailing Association, to enter into the international sailing arena. The Belizeans who embraced the first Bart’s Bash last year and sailed, also served to promote the newest recreational sailing in Belize. 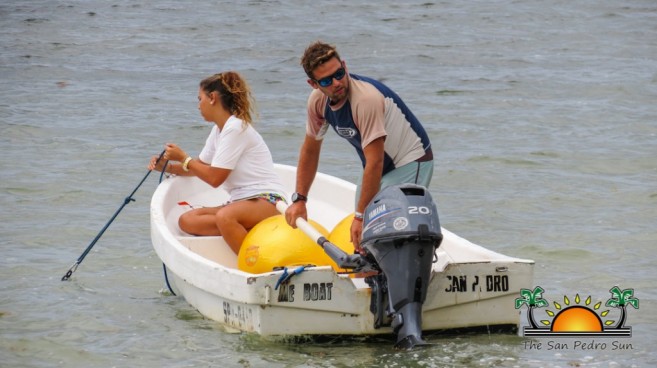 This year, although murky, the skippers tried to find and catch the mere puffs of wind that rose and died from varying directions along the course. The day was so calm that it took a few frustrated skippers more than 10 minutes just to cross the start line. As the day progressed, an approaching squall from the northeast arrived and with it, winds up to 25 knots. The course circuit that had taken a Hobie Wave over an hour to complete on its first lap, took only 14 minutes to complete the second and third laps. With the favorable weather conditions now on hand, racing was back to normality. 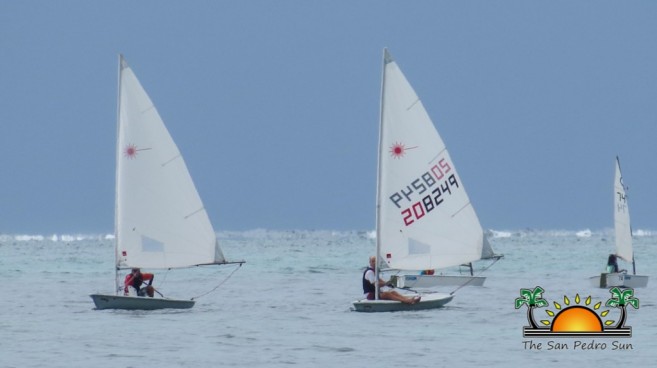 Jorge Sanchez, manning the Hobie 18 “Shalom” came screaming to the finish ahead of all others, a minute and 45 seconds ahead of Gorge Olivarez’ Laser Radial, and two minutes ahead of Antonio Ricardez’ Laser Radial. However, after the handicaps were applied to these and the other boats, seven of the children sailing Optimists swept the top seven places. Kevin Velasquez of San Pedro Sailing Club (SPSC) took the first place finisher, winning first overall for San Pedro. In second was Nashira Ricardez of Belize City Sailing Club. Mitchell Sersland of SPSC captured third place, while fourth through seventh went to Caroline Sersland, Gracie Brown, Nicholas Lausen, and Alexandra Lausen, respectively. The next seven places were won by all the Laser Radial sailors; Gorge Olivarez, Antonio Ricardez, and Sarah White taking eighth , ninth, and tenth, respectively.

The organizers for the Belize segment of Bart’s Bash have submitted the results, which will be compared with race results from across the world. The 2015 Bart’s Bash International Regatta was held at 469 venues with 62 counties and 11,367 sailors participating. Full results will be posted at www.bartsbash.com.

San Pedro Pirates lose at home to the Placencia Assassins