The fourth annual End of the World Marathon saw hundreds of national and international athletes competing in what is now the largest race in Belize. The race was held at Placencia Village on Sunday, December 6th and certainly tested participants’ endurance and stamina. As always, San Pedro was well represented at the marathon, with the participation of Kent “Bob” Gabourel and Eric Donis, and even though neither made it to the winning podium, they still made the island proud. 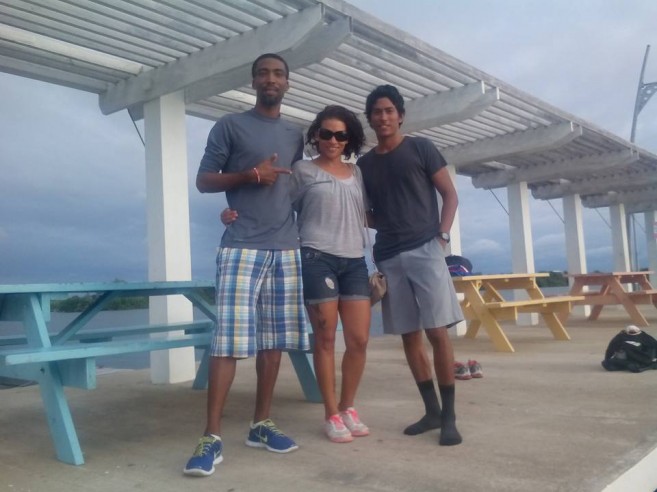 The race started early Sunday morning at 5:30AM at the Placencia Football Field. Created in homage to the Maya Calendar which ended in 2012, the End of the World Marathon is a grueling 26.2 mile race. Of course, novice athletes can opt to participate in the less intense End of the World Half Marathon of 13.1 miles. Over $10,000 worth of awards and prizes were given to the top three males and females overall in the full marathon and the half marathon. Awards were also given out to the top three males and females in five age categories: under 29, 30-39, 40-49, 50-59 and 60 and over. In addition all runners who finish the race, not matter their placement received a commemorative finishers’ medal for taking on and completing the End of the World Marathon. A total of 160 runners participated in this year’s marathon.
At the end of the race the overall champions in the full marathon were Juan Blum in first, Henry Hepworth in second and Satoshi Tshii in third for the male category with Christy Almeida in first, Beth Spiegel in second and Jodi Johnson in third for the female category. Top finishers in the half marathon were Leon O’Brien in first, Eric Donis in second and Daniel Grant in third for the male category; and Kerah Eiley in first, Elisabeth Zabaneh in second and Julie Maitland in third for the female category. Winners in the other categories are as follows: Male 30-39 – David Salinas in first, Kent Gabourel in second, Davide Cano in third; Male 40-49 – Marvin Hope in first; Male 50-59– Jay Johnson in first, Joe Friel in second; Male 60 and over – Hank Art in first, Orlando Pech in second, Silvio Bara Velli in third; Female under 29 – Cheryl Rowland Nunez in first, Sharlie Velasco in second, Shannon Bland in third; Female 30-39 – Dilema Ruiz Friel in first; Female 40-49 – Linchu Sloan in first.
As for Gabourel, this year he finished in 7th place in the full marathon. “I didn’t get my podium position but I fought my way to cross the line in 7th place. I’m done but not out. Lord thank you for a great year and asking for more to come,” said Gabourel. Donis finished in second in the half marathon. Both island athletes would like to extend a big thank you to Councilor Gary Grief, San Pedro Town Council, Marion Mejia, Tropic Air, Laru Beya Resort, Giovanni Alamilla and all their family and friends for their unconditional support.
Organizers would like to thank all those athletes who took the time to participate in the 4th Annual End of the World Marathon. Proceeds from the race will go towards providing high school education to Placencia children. Thanks are also extended to event sponsors: Chabil Mar Resort, Belize Bank, Tropic Air, Atlantic International Bank and Robert’s Grove Beach Resort.