Island Citizens Sporting Club (ICSC) and the San Pedro High School (SPHS) are back at it with their second ever 5-a-side Football Tournament. After a fun marathon that showcased the skills of the participating teams, the tournament officially started on Sunday, December 13th, with nine thrilling matches. As in the previous edition, the 5-a-side Football Tournament is divided into three categories to better accommodate all levels of athletes: little leagues, females and male seniors. Matches were held at the Angel Nuñez Auditorium from 11AM to 8PM.

Starting the day’s matches were the little leaguers, playing in either the Under-11 or Under-13 sub-category. The first match was between Bayern Munich B FC and FC America. This match ended in a 4-0 game in favor of FC America, with Steven Almendarez and Luis Hyde scoring two goals each. In the second match Bayern Munich A FC defeated El Pescador FC in a 4-2 point match. Scoring in this game were Edward Reyes with four goals for Bayern Munich A FC and Leon Reyes with the two goals for El Pescador FC. 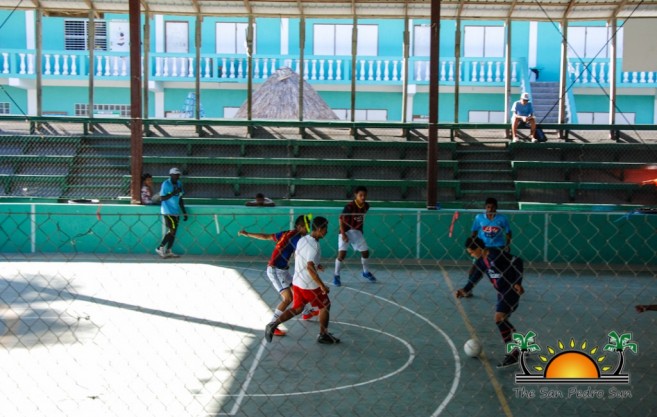 The eight game of the day ended up in a 2-2 tie between Island Pure FC and Boca Jr’s FC. Scorers for this match were Elor Gonzalez and Ismael Figueroa for Island Pure FC, and Roberto Guerrero and Clifford Lewis for Boca Jr’s FC. In the last match of the day Costa Blue FC defeated E&L Boys FC in a 3-2 match. Scoring for Costa Blue FC were Luis Hernandez with two goals and Denis Westby with one goal, while Carlos Noriega and Leoli Jurado were the scorers for E&L Boys FC.

The second round of games will be played on Saturday, December 19th starting at 5PM, schedule is as follows: Green Hornets FC versus Real Jr. FC, Island Boys versus SPHS Boys, United FC versus Haramouch FC, Mata Chica FC versus Los Dorados, Victoria’s House FC versus We Them Boys and Pro Divers FC versus Los Catrachos FC. For more information on the tournament, contact head organizer Alex Noralez directly at 631-0711.