From Monday, March 21st to Sunday, March 27th, the Belize Sailing School held an Easter Optimist Training Clinic off the coast of Caribbean Villas Resort. Juan Ignacio Mazzini, the Sailing School’s Director of Laser and Optimist Training ran the clinic. Among the participants in the clinic were two Canadian Optimist dinghy sailors from Toronto, Canada who came to Belize for the week-long training. 13-year-old Dhalia Steinitz and 12-year-old Andreas Steinitz, siblings, had spent the week before at a preliminary training in Curacao. 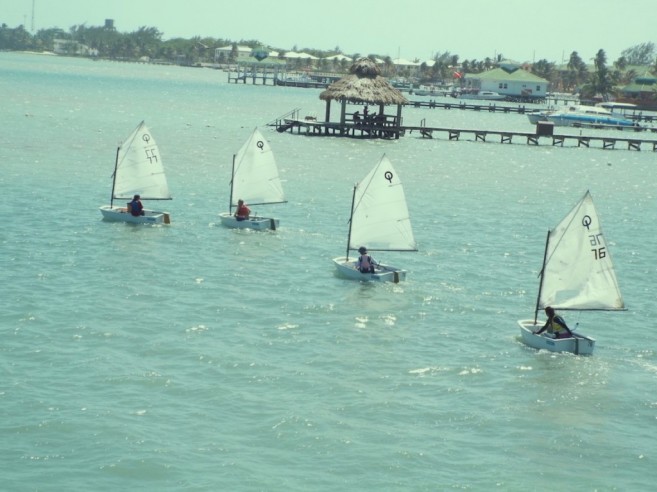 They and their parents dedicated the entire spring break to sailing in preparation for three solid weeks of Optimist training events and regattas near their hometown this coming August 2016. “Their father, Dan Steinitz indicated that Andreas in particular has a shot at making Canada’s 40-boat Optimist National Team,” said Forrest Jones, Media Relations Manager at the Belize Sailing School.
Kevin Velasquez, the current Belize National Champion, Caroline Sersland who ranks 3rd in Belize, and Nicholas Lausen who holds the 12th rank, joined Dhalia and Andreas in the clinic. “The addition of three of the Belize Sailing School’s own candidates for international competition heightened all participants’ resolve to concentrate and to train hard and enthusiastically. The clinic took place in the balmy waters behind the reef offshore at Caribbean Villas Hotel,” said Jones. 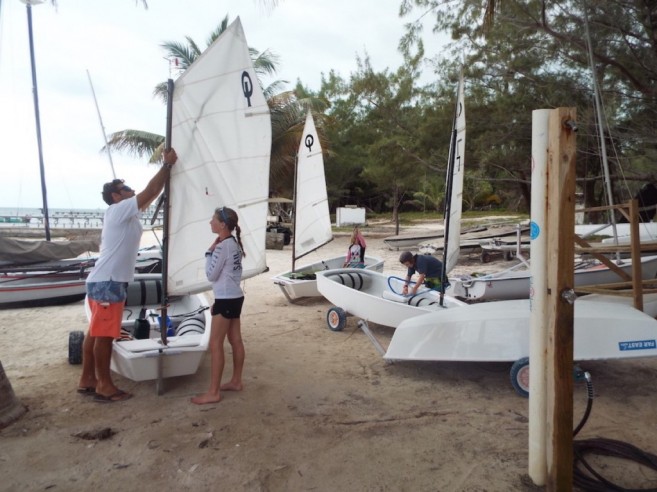 The clinic began ashore with lessons and review of the secrets of the Optimist sail rigging, tuning, and trimming, which vary according to weather conditions. Following that, the clinic went to sea so that Juan could assess his sailors’ skill levels and give advice. “Subsequently, each day’s training began ashore with discussion accompanied by video and diagrams Juan drew on a white board of what was to be accomplished that day. Then each day ended with analysis of videos Juan had taken of the trainees’ individual performances and more videos of champion Optimist sailors exercising the skills his trainees had been practicing,” explained Jones on the logistics of the sailing clinic.
“From a landlubber’s perspective the training offshore looked like a colorful circus of comical and random chaos performed at close quarters and ultra-high speeds in the 12- to 16-knot winds that prevailed during the week. In reality the sailors were improving their ability to tack and jibe as quickly and smoothly as possible and to use their weight and body position and movement, as well as their sails, to maximize boat speed rounding marks and sailing from one mark to the next. The clinic then moved ahead to practice races, in which Juan in his safety boat would pull alongside and render compliments and advice to each sailor, as the case warranted. The last days were devoted to actual racing, with Juan briefing the sailors before each start and debriefing them after the finishes,” said Jones. 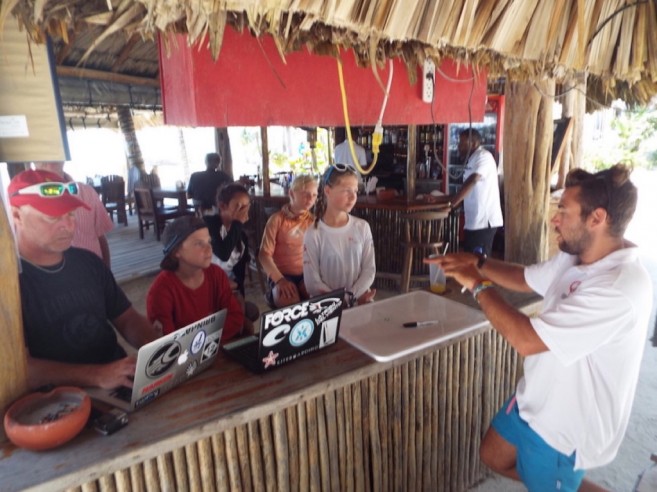 The clinic’s last race was the Belize Sailing Center’s weekly Sunday regatta, and was won by the young Canadian, Andreas Steinitz. Following the awards ceremony, the sailors were shown videos that compared their performance in the beginning of the week to their performance at the end. The improvement in tactics, and in boat, body and sail control was obvious in the final videos taken.
“The Steinitzes and their children are all inveterate kite boarders as well as sailors. They said that the venue holds special appeal because they could all kite board together after the kids finished sailing for the day. They invited the Belizean sailors to visit and stay with them and to enter one of the Optimist regattas that Dhalia and Andres will sail in this summer. It is the August 11-14 CORK International Optimist Regatta in Kingston, Ontario, Canada. 165 boats are expected to be on the start line. The Belize Sailing School is hoping to accrue sufficient funding through donations to send their top two Optimist sailors, Kevin and Caroline,” ended Jones. 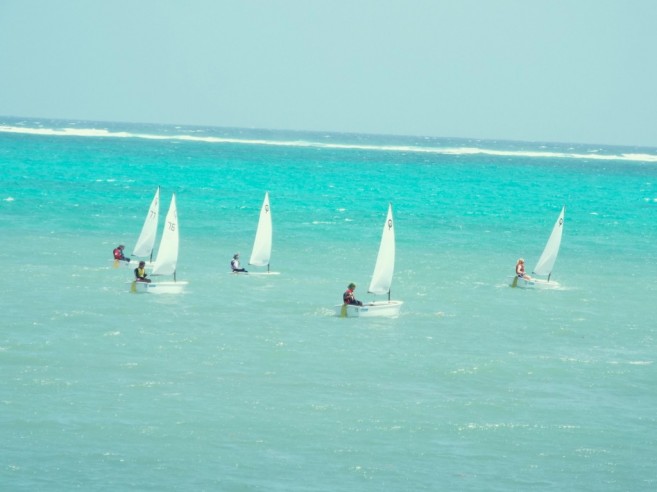 The community’s assistance is being requested to acquire funding for the two young Belizean sailors to travel to Canada. For more information on how to donate, contact Forrest Jones by email at [email protected] or by phone: in Belize 610-4550; or skype: 415 315-9791.

Tiger Sharks overcome No Limits with a split-second win

Mayor’s and Minister’s Cup hold second round of games