The first round of the Premier League of Belize (PLB) concluded on Sunday, September 24th, with three matches taking place in different parts of the country. On Sunday, the San Pedro Pirates F.C. travelled to San Ignacio Town in the Cayo District where they faced Verdes F.C. Both teams gave their best in a tight match that saw the strength of the island squad, but when the time was up, it was a victory of 1-0 for Verdes F.C. 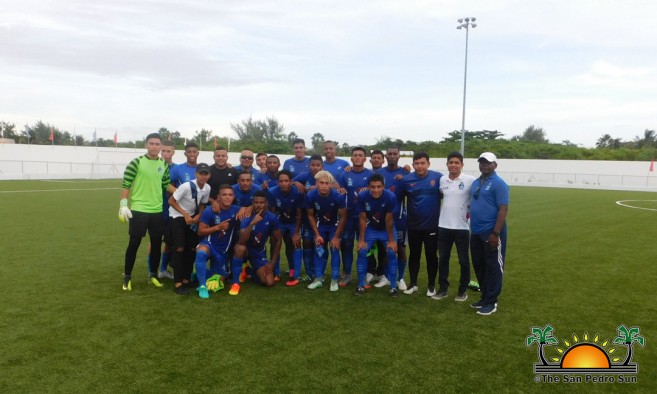 After a slight rain, the game started at 4PM, with Verdes controlling the ball in the first minutes of the match. The San Pedro Pirates quickly went on the offensive and at minute 13, the island boys made their first close attempt to open the score. Another attempt came a few minutes later, but there was still no goal. Verdes came back on the offensive and despite some very close and strong shots, Pirate’s goal keeper kept the goal safe! When the first half ended, the score was 0-0.
In the second half, both teams went hard against each other, seeking to make that one goal that would give them three additional points in the current PLB standings. The pressure to open the score was on both teams, but it was Verdes’ Denmark Casey Jr., at minute 68, who gave the home team the lead they needed. A minute later, Pirates was close to tie the game, but the ball could not find the goal. At minute 75, the island team made a comeback, scoring a goal. However, it was nulled due to an apparent offside call by the referee. The Pirates made several attempts in the remainder of the game, but they were unsuccessful. When the long whistle blew, it was Verdes who took the tight victory, 1-0.
Pirates’ Sean Mas has stated that the team will continue working hard, and hopes to do better in the upcoming home games on the island during the second round of the PLB.
Other games that took place during the weekend saw Wagiya F.C falling against Belmopan Bandits 2-1 in in Dangriga Town, while, Police United F.C defeated Placencia Assassins in a heated 4-2 match. The last game of the weekend saw BDF F.C crushing Freedom Fighters F.C 3-0.
The current standings of the PLB has Belmopan Bandits leading with 16 points, followed by Verdes F.C and BDF F.C with 13 points. Police United F.C has 12 points, while San Pedro Pirates have eight points. Placencia Assassins and Wagiya F.C both have seven points, and Freedom Fighters F.C have three points.
The second round of games begins on Saturday, September 30th, when the San Pedro Pirates face the Belmopan Bandits at the Ambergris Stadium. The game has been scheduled to start at 3PM sharp.