San Pedro’s own Ada Cordova won the Most Valuable Player award, as she led the University of Belize girls to win the Association of Tertiary Level Institutions of Belize (ATLIB) national football championship hosted by San Pedro Junior College at the Ambergris Stadium over the weekend. 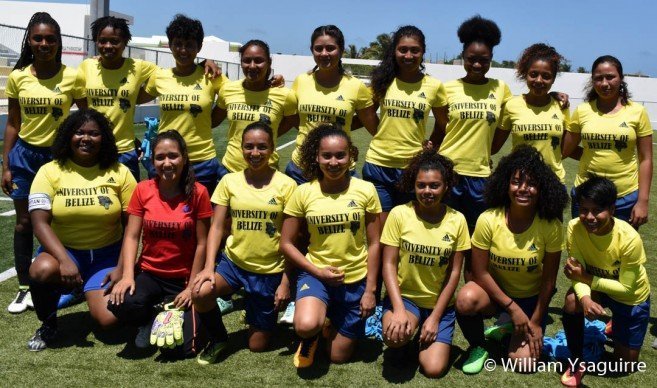 In Game One Friday afternoon, the UB girls advanced to the finals by a 3-0 win against the Northern regional champs, the Centro Escolar Mexico Junior College girls with goals by Camryn Howard in the 14thminute, and Sabrina Eiley in the 17th and 47th minutes.

In Game Three the consolation match for 3rd place Saturday morning, the SJCJC girls won 3-0 against the CEMJC girls, with two goals by Gabriela Mendoza in the 2nd and 38th minutes, and Kelsie Moss scored in the 23rd minute on a set piece.
In Game Four the championship final Saturday afternoon, the UB girls won 3-1 against IJC in a penalty shootout, with Ada Cordova, Sabrina Eiley, and Libni Mojica scoring for UB, as the UB keeper Delta Flores stopped one penalty. IJC’s keeper Daisy Quinteros stopped 2 UB penalties, but only Renisha Requeña scored for IJC as 2 IJC kickers missed.