On her last day on Ambergris Caye, Sunday, December 1st, world-renowned gymnast and Olympic champion Simone Biles visited the Maruba Beach Klub at Secret Beach where she met with proprietor Alexandra Nicholson, a former gymnast champion who was inducted into the USA Gymnastics Hall of Fame in August 2002. Biles, currently the most decorated artistic gymnast of all time, was on a holiday break in Belize as she prepares to compete in the upcoming summer Olympics in Tokyo, Japan in 2020. While on the island, Biles received a symbolic key to San Pedro Town and met with local Belizean athletes at a reception held at Ramon’s Village Resort.

Biles was accompanied by a U.S press group, who are filming a documentary on her journey to Tokyo. They followed her as she visited a few places around the country, and after a stop on Caye Caulker Village, the Olympic champion decided to visit Secret Beach to meet with Nicholson. This was the first time either met, and Nicholson said she felt privileged to share some time with her. Nicholson stated that everyone at her Maruba Beach Klub had a wonderful time during Biles’ presence. She felt that she connected with Biles immediately, as they both share experience in the discipline of gymnastics. “Flexibility, and concentration are key when it comes to gymnastics,” said Nicholson. According to her, Biles extended an invitation to visit her gymnasium in Texas, and Nicholson is looking forward to do so before the summer Olympics. 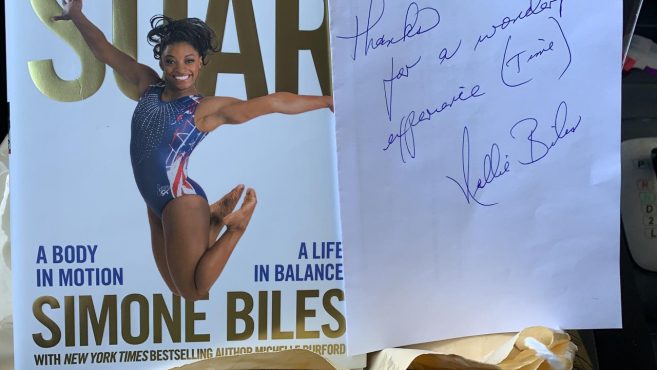 Biles holds 25 World Championship medals, 19 of which are gold. Her most recent achievement was in October of this year, where she captured five titles at the 2019 World Championship in Stuttgart, Germany. Nicholson is former champion in gymnastics and was highly acclaimed by the World Acrobatic Society in 2001 where she was honoured with the title of ‘Acrobatic Legend.’ The following year, she was welcomed into the USA Gymnastics Hall of Fame for her extraordinary performances. Nicholson has been considered the greatest woman trampolinist in the history of the sport. Her trampoline fame led her to guest performances at places like Radio City Music Hall, Madison Square Garden and on the Mike Douglas Show.

Nicholson even performed at London’s Buckingham Palace for Her Majesty Queen Elizabeth II, was in the movie ‘Billy Jack,’ and was the featured half-time entertainment at a Los Angeles Lakers basketball game. Throughout her eight years of competition, Nicholson was undefeated in over 200 national and international competitions and became the first woman in the world to ever complete a ‘Triffes’, a forward triple somersault with a half twist. Upon the completion of her sporting career, Nicholson attended the University of California, in Los Angeles, where she competed on both gymnastic and track teams.
Nicholson, who was born in Switzerland, Europe and later moved with her family to the United States of America, now resides in Belize. She, like Biles, shares the Caribbean culture through her father, who hails from Trinidad and Tobago. Biles holds Belizean ancestry through her mother and considers Belize her second home, where she gravitates for quality downtime by the Caribbean Sea.