In an effort to discuss primary issues regarding Ambergris Caye’s traffic situation, the San Pedro Town Council (SPTC) partnered with the Caribbean Local Economic Development (CARILED) to host a traffic consultation on Monday, January 16th. Due to the rapid population growth on the island, traffic congestion has been a major issue among locals, students, and tourists. Previous meetings between various business and tourism stakeholders, the San Pedro Traffic Department, taxi operators, truckers, the Children’s Advisory Board (CAB), the Sustainable Child Friendly San Pedro Steering Committee, the media, and the general public led to the public exchange at the Lions Den. 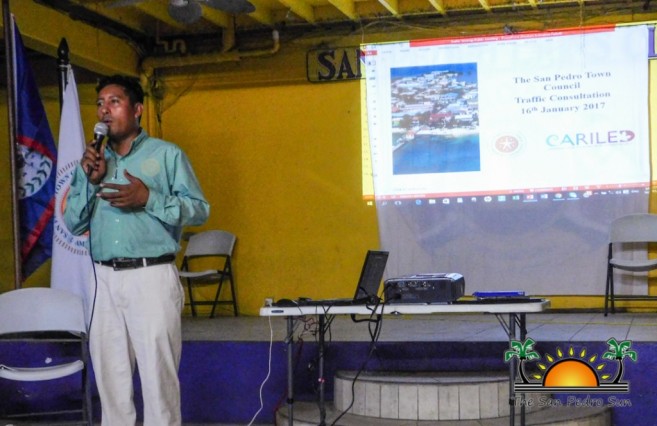 Jorge Aldana of the SPTC facilitated the presentation and gave a brief overview of the purpose of the meeting. “San Pedro is a fairly young municipality…we notice the pattern of growth of San Pedro increasing at a 17% annual growth rate…San Pedro has become a tourist destination, and we have depended on tourism and other tourism spin-off activities…traffic has become a major challenge and we need to think of our future,” said Aldana.
With the additional feedback from this consultation, SPTC is seeking to contain the problem before it spirals out of control and becomes unfixable. According to the presenters, the four main issues regarding traffic in San Pedro are: influx of vehicles/golf-carts, parking issues, taxi regulations, and not having a public transportation system in place. 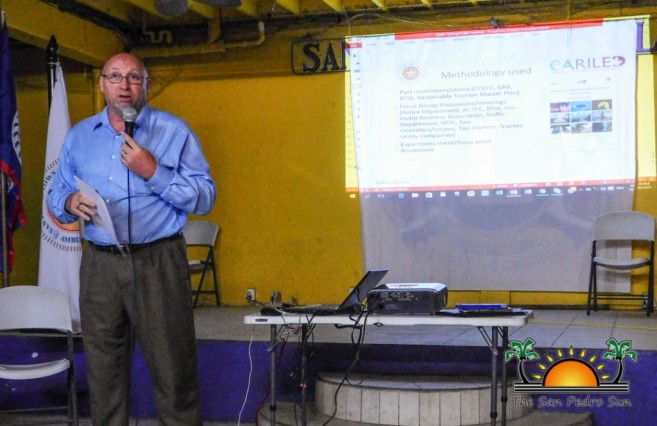 Invited guest Darwin Juell is native to Alberta, Canada, where over the last 20 years he has gained experience in creating traffic plans for different municipalities. The traffic expert shared ways to effectively address the situation in San Pedro. Based on his research, feedback, and observations the issues are that 50-60% of vehicles on the island are golf carts, many stakeholders complain that taxi drivers are not courteous, there’s limited space to create additional streets, the current streets are narrow, there is a lack of signage, and the beach has degraded.
Juell mentioned that south of the roundabout on Lagoon Drive does not have a sidewalk, while north of the roundabout to the bridge has a sidewalk, but no room for two-way traffic. The audience suggested that sidewalks should be mandatory for all streets in downtown San Pedro, which will require more parallel parking to reduce the space required for parking. It was also determined that the entire Pescador Drive needs a sidewalk, which would be four to five foot wide for school children to walk on. Since there is also lack of signage on the island, and parking is an issue, he suggested that the San Pedro Traffic Department create signs that limit parking for only two hours. If the parked vehicle exceeds the limit, the driver will be ticketed. 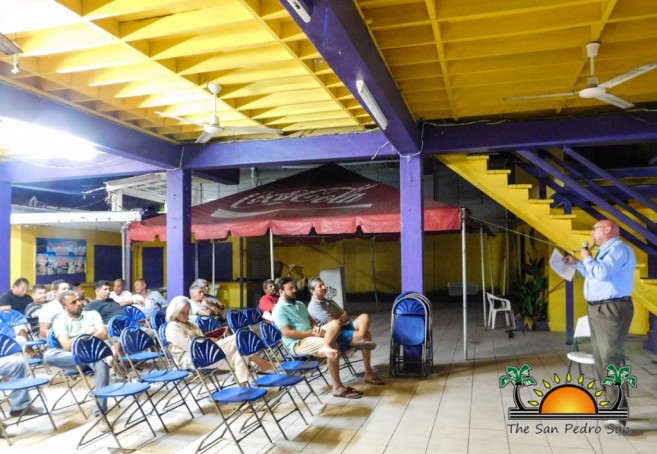 Juell told The San Pedro Sun that he is determined to eliminate excessive traffic without losing the island’s charm. “My job is to improve traffic, parking, taxi regulations, and potentially even develop a bus system to support the idea of public transportation. We have huge growth in San Pedro, so the big question is how to accommodate that growth while alleviating the traffic. San Pedro has a lot of character, and I want to preserve that,” he said.
Within his traffic flow study and strategy presentation, Juell discussed practical approaches that would include: the pedestrianizing of streets and beach; regularization of the taxi industry and the drafting of a taxi operational manual; and the implementation of public transportation.
The idea of introducing public transportation, which would be a transit or bus system, was heavily supported by the audience, although many taxi operators and drivers did not support the notion. Juell suggested that this transportation system is only intended for students and locals, and not tourists. Not only would this be beneficial to those who cannot afford to commute on a taxi, but it will ease both traffic and parking issues. This system will have regular stops schedule from 7AM until 9PM, every 15 to 30 minutes. The proposed regular stops will go to the downtown area, north to the bridge, and will return south at the end of the paved street. 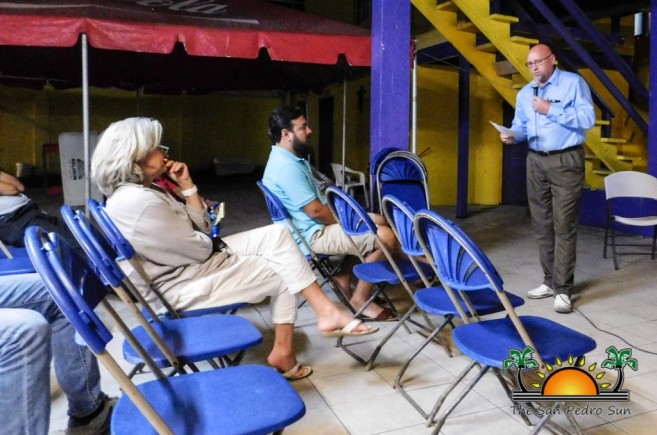 The number of private vehicles in the island was another heavily discussed topic. According to data from the SPTC, approximately 75 new golf carts or new vehicles per month were approved in 2016. Therefore, it was suggested that the SPTC to put a full moratorium on golf-carts, or limit one golf-cart per family. The idea of pedestrianizing Barrier Reef Drive will eliminate the current heavy school traffic, and alleviate the erosion on the beach.
Juell also emphasized his concern regarding the current operations of the taxi industry. Based on feedback from previous consultations, he stated that there is a disconnect between taxi drivers and customers. Many stakeholders commented that the taxi industry has lost the trust of the tourists, as well as locals. Therefore, he suggested strict taxi regulations.
After the presentation, the audience was encouraged to fill out a ‘San Pedro Traffic Study” questionnaire, which contained eight questions whose answers will be taken into consideration. Questions included the types of problems encountered over the past year, describing experiences when taking a taxi, and thoughts on the signage in town.
The consultation ended with a question and answer session, where members of the audience offered their suggestions, recommendations, or ideas that would further help the traffic situation. A couple of commenters asked Juell about ideas like a train system, freeway, and adding additional streets, where Juell responded in a practical manner. Despite the ongoing issues on traffic, the SPTC looks forward to revitalizing San Pedro in a positive and effective manner.