Motorized scooters have become a popular mode of transportation attracting the youth in San Pedro Town. These powered stand-up scooters use a small electric motor, and its design and speed allows users to quickly slide through traffic. This new means of transportation is beginning to cause problems with the already congested traffic situation on the island and islanders are concerned about the dangers these vehicles pose. Not only is the general public against it, but the San Pedro Traffic Department (SPTD) as well. The SPTD stated that they do not agree with the powered stand-up scooters and that they never issued any permits for their usage on the island. 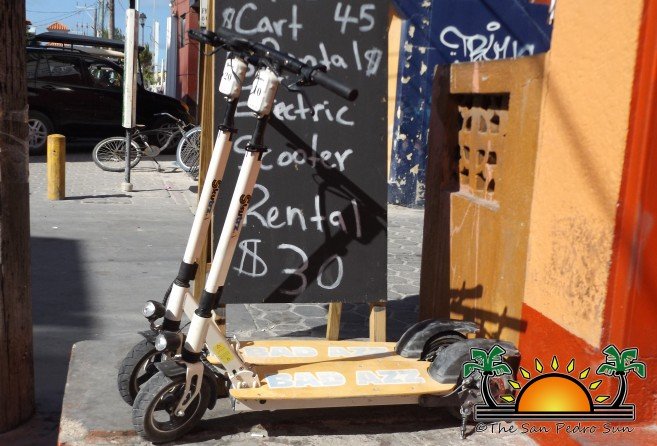 The scooters, however, are being used and can be rented from different establishments in downtown San Pedro. Although the SPTD does not approve of the new business, the proprietors were able to override their decision by obtaining a trade license from The San Pedro Town Council. According to SPTD, they consulted with the Belize Department of Transport, who advised them that such scooters should not be issued permits. Despite this consultation, the proprietors were still allowed to run this business under certain conditions. They agreed to adjust the speed on the scooters, and are making sure that only persons from a certain age can rent them. Also, they must use protective gear when using the scooters. Failure to do so will result in the proprietor being fined. The rental will then charge the customer for the amount of ticket issued by SPTD. “As you will see, these scooters have no license plate or anything like that, because we did not give them permits,” said a representative from the SPTD. “We believe that such devices should be used in enclosed places and not on the streets. A very bad accident could happen.”
The personnel at the traffic department agreed that according to Laws of Belize ‘29.-(1) Except as provided in this section, no person shall drive a motor vehicle on a road unless he is the holder of a Belize Driving Licence, and no person shall employ any person to drive a motor vehicle on a road unless the person so employed is the holder of a Belize Driving Licence, and if any person acts in contravention of this provision, he commits an offense and is liable to a fine not exceeding two hundred and fifty dollars.”
No driver’s license is required to rent the scooters other than presenting a document that can prove the person is at least 17-years-old. The SPTD also noted that parents would get these vehicles for their children to go to school, increasing the chances for an accident. This practice was immediately brought down by the traffic officers of the Department.
The San Pedro Sun attempted to reach out to Mayor Daniel Guerrero learn why a trade license was issued after the SPTD had denied them permits. Guerrero, however, was not available for comment and the Trade License Board could not comment on the issue.
The popular scooters have reportedly caused a series of accidents in town, and many residents fear that someone could end up getting badly hurt. A couple of incidents involving young children were reported in downtown during the Easter holidays. The latest incident took place over the last weekend in April, when four users were caught without protective gear. The scooters were taken away, and the rentals served with a fine by traffic officers.

Letter to the Editor: Bicycle riders disappointed with traffic conditions