« Older: Letter to the Editor: Congestion on roads not designed for large vehicles
Newer: » Handing Over Ceremony of Eighteen Police Motorcycles for Road Safety Enforcement in 9 Municipalities


Over the past weeks, Ambergris Caye has registered an alarming increase in golf cart traffic accidents, with several residents and visitors sustaining grave injuries. The San Pedro Traffic Department has stepped up to address the issue, saying it believes the incidents are caused by speeding. As a result, golf cart rentals on the island are being inspected to find out if their vehicles’ speed limiters have been altered. If golf carts are found with this modification, the proprietors will be ordered to reset the limiter before the cart can be used or rented out. 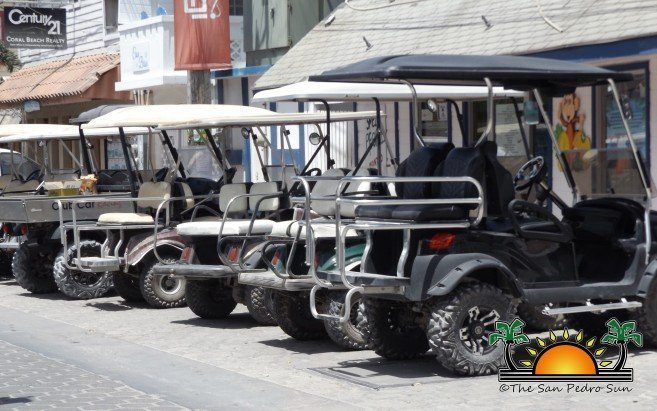 The reportedly assigned speed limit in downtown San Pedro is 10 Miles Per Hour (MPH), while elsewhere is 15 MPH. These speed limits are clearly stated on signs across the island. If the problem of speeding continues, the traffic department can file criminal charges at the San Pedro Police Station. Motorists are reminded to drive with due care and to especially avoid driving under the influence.
With this new measure in place, The San Pedro Town Council and the SPTD hopes to see a decrease in traffic accidents. This aim of this norm is to guarantee the safety of drivers across the island. The San Pedro Sun spoke with some Golf Cart rental owners, who heartily support the initiative. They shared that the safety of their customers is always a priority. Also, a number of these establishments indicated that the speedometer of their carts is at the required speed level. However, they reported that sometimes customers alter it. “When the golf carts are returned, we noticed that the speedometers had been adjusted, either by the customer or someone else,” said a golf cart rental owner. Since the new regulation came into place, the number of traffic accidents have reportedly decreased.
The recent traffic accidents have been reported north of San Pedro Town along the route to Secret Beach and apparently involving golf carts only. Most of the victims are reportedly tourists, who have turned over and even fallen off moving golf carts; one of the most recent major incidents involved an 18-year-old American National Austin Lientz on May 5th. Lientz reportedly fell off a fast moving golf cart north of San Pedro and was badly injured. He was assisted by the Rickilee Response and Rescue Team (Triple R), who found him with a concussion and unconscious. His injuries were so grave that after being treated on the island and then transported to Belize City, he was airlifted to a hospital in the United States of America, where he has made a remarkable recovery.
A few days after, on May 12th, a young lady driving a golf cart crashed against a building around the area of Grand Caribe Resort north of San Pedro Town. A surveillance video footage showed the violent collision, which left the young lady with severe injuries to her knees. She was reportedly assisted by Triple R and after undergoing treatment at the Dr. Otto Rodriguez San Pedro Polyclinic II, was airlifted to Belize City for further medical assistance. According to members of the Triple R team, she has made a complete recovery.

Letter to the Editor: Traffic and Exhaust