Ambergris Caye was once again well represented at this year’s Belize Tourism Board (BTB) 15th National Tourism Awards. Held on Saturday, October 21st at the Ramada Belize City Princess Hotel and Casino, the event saw guests from all areas of the country witnessing the winners of the event. Joining the anticipated celebration was Deputy Prime Minister Honourable Patrick Faber, Minister of Tourism and Civil Aviation Honourable Manuel Heredia Jr., and Kim Simplis Barrow, Special Envoy for Women and Children.
The event was held under the theme ‘Rainforest Meets Reef,’ a setting that was most fitting for the tourism stakeholders that depict the diversity of Belize’s tourism product. The BTB Awards recognizes and honors those organizations, industry partners and individuals who have made outstanding contributions to the tourism industry in Belize. Annually, the BTB recognizes Belize’s tourism stars in the areas of Frontline Personnel, Hospitality Award, Hotel of the Year, Small Accommodations of the Year, Tour Guide of the Year, Tour Operator of the Year, Restaurant of the Year, the Minister’s Awards and the Lifetime Achievement Award. 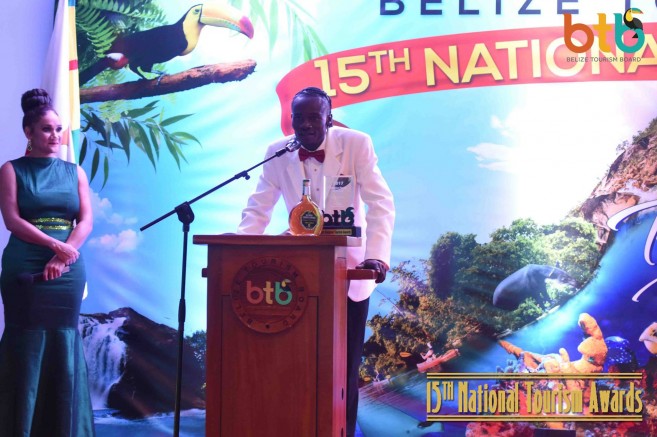 Ambergris Caye nabbed three of the prizes for the evening, starting with the Frontline Personnel of the year, which went to Las Terrazas’ Leroy Welch. Welch has always been involved in the tourism industry providing services to the tourists. According to him, he started off selling jewelry on the beach, as well as delicious panades. “I mingle a lot with tourists, I get to know them, and they get to know me and see a great happiness in me,” said Welch. He also noted that he always gives his all to make visitors feel welcome when they visit the island. 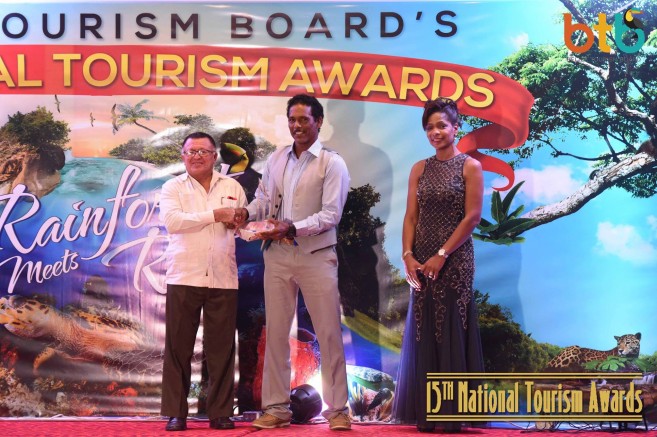 The Minister’s Award went to Phillip ‘Billy’ Leslie. Leslie is well known on Ambergris Caye and is the president of the Tour Guide Association on the island. He is proud of this achievement, sharing his transition from the end of the commercial fishing era into tourism, with fishing tourists encouraged to visit areas at sea where they could snorkel, view manatees, and even do inland tours to visit Maya sites. “We were the commercial fishing group that knew a lot about the reef, where the different marine species were, so when a customer said I want to go and see some fish, we knew were to take them,” said Billy. He mentioned that his passion has always been scuba diving, and after obtaining his open water certification, he became an instructor. He said there were not many Belizeans in the field, but he was able to convince several islanders in becoming scuba instructors, and ever since, it has been an area which many Belizeans have now ventured. 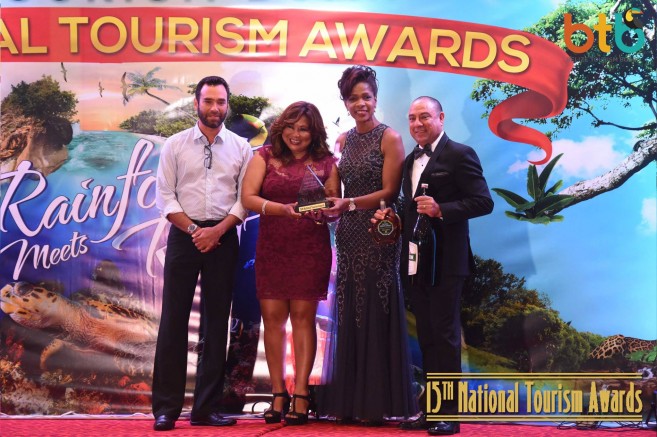 Taking Hotel of the Year Award was Grand Caribe Resort, a condominium resort located north of San Pedro. The luxury property opened in 2010 and comprises of 76 condominium units ranging from one bedroom to five-bedroom villas. According to Amy Leiva, the resort employs 99% Belizean staff and is considered a luxurious and modern resort within the country. “We promote Belizean culture, we are here to make every single guest feel the Belizean hospitality, which is the priority of the resort,” said Leiva.
After the award ceremony, guests mingled and enjoyed the planned festivities.
The other 2017 BTB awardees are:
Hospitality Award -Ian Anderson’s Caves Branch
Small Accommodation of the Year- Caribbean Beach Cabanas
Tour Guide of the Year- Estevan Choco – The Lodge at Big Falls
Tour Operator of the Year- Toledo Cave & Adventure Tours
Restaurant of the Year- Rumfish y Vino, Placencia
Life Time Achievement Award- John Michael ‘Mick’ Fleming and Lucy Fleming of the Lodge at Chaa Creek Lodge
The San Pedro Sun would like to congratulate all winners of the 15th BTB National Tourism Awards and applauds their excellent work throughout the year.