« Older: Heart failure determined to be cause of diver Steve Vorhaus’ death
Newer: » Letter to the Editor: Lifesaving Lessons with Butane 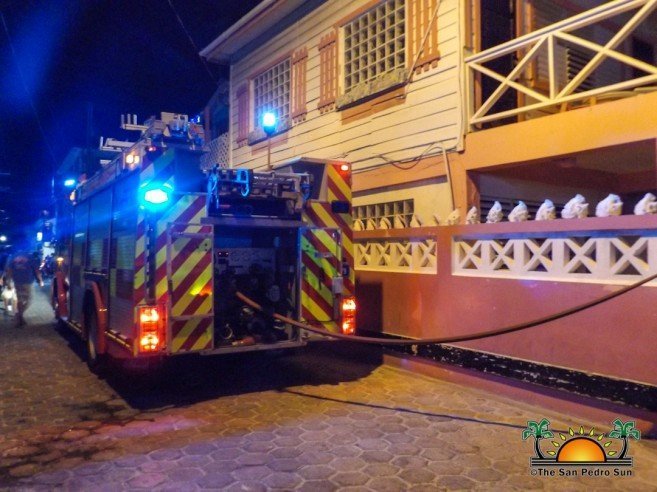 The first incident happened inside one of the rooms at the Conch Shell Inn off Barrier Reef Drive on Wednesday, August 7th. The SPFD quickly responded and along with the help of some volunteers, extinguished the flames before it could spread to other rooms of the hotel. The fire began shortly after 7PM, in room number four on the second floor of the hotel. The fire is attributed to an electrical fault associated with a refrigerator in the room. The room was unoccupied, and no one was injured. Hours later, fire fighters responded to a second fire inside a two-bedroom apartment in San Pedrito sometime after 4AM on Thursday, August 8th. Firefighters contained the flames, but most of the items in the room were destroyed.
An official report on the fire at Conch Shell Inn stated that about 7:20PM San Pedro police visited the location, which counts with many surrounding business establishments. Upon their arrival, they observed the second-floor room engulfed in flames. The SPFD was already there, and under instructions of Fire Chief Gladston Buckner, the fire was completely extinguished. A volunteer who first responded to the scene said that he and others managed to contain the fire until the firefighters arrived. Initial investigations indicate the manager of Conch Shell Inn, 47-year-old Viviana Chun was alerted by guests about fire and smoke coming out of room number four. She immediately called the island fire department and the police. According to Chun, a refrigerator, which had been sent to be repaired was brought into the said room earlier that day.
At the end of the initial probe into the blaze, Fire Chief Buckner determined that the fire was ignited from the refrigerator. The room sustained minor damages. A total value of damages to the property is yet unknown.

Fire in San Pedrito
On Thursday, August 8th at around 4:30AM, a fire was reported in San Pedrito. Firefighters observed a ground floor two-bedroom apartment in flames and quickly began hosing the blaze. After a couple of minutes, the fire was successfully contained, but unfortunately, the fire ravaged the apartment, and nothing could be saved. At the time of the fire, no one was in the apartment. Thus, no one was injured. According to official reports, the fire is believed to be due to an electrical circuit starting from an outlet in one of the bedrooms. 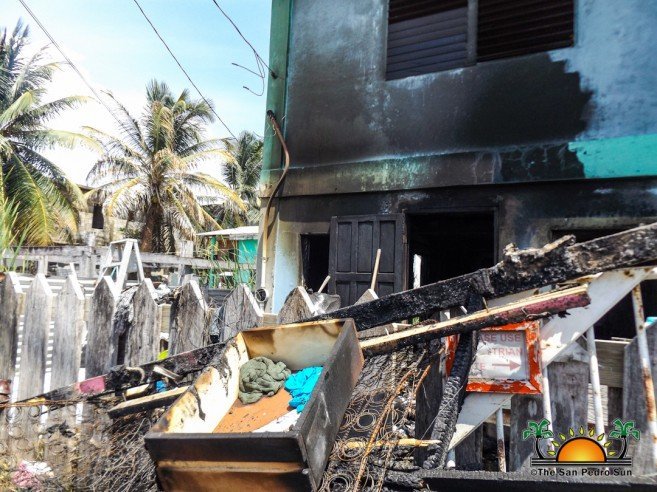 The apartment was occupied by Casey Blades and his family. He shared with The San Pedro Sun that at the time of the fire, he was staying at his in-laws’ place, on the second floor above his home. According to him, around 3AM, smoke started to come into the flat on the second level and woke them up. “We came down to inspect what was happening and discovered that our apartment was on fire,” he said. “The fire had begun from one of the bedrooms, and along with others, we tried to contain the fire.” However, the smoke and heat made it impossible for them to fight the blaze, which gutted everything in the household.
The family lost everything. “Everything was destroyed,” said Blades. “The beds, clothing, TV, stove, microwave, everything is gone. That’s how it is. One time it is here, and the next time it’s gone. You have to stay positive and move on, start from scratch again, and never give up.” He is optimistic that better will come.
At the time of the fire, Blades explained that they tried to contact the San Pedro Fire Department via 911, but had difficulties getting through with the call. By the time, the SPFD was alerted and got to the scene, the fire had already engulfed most of the flat and even though it was contained, all belongings were destroyed, including identification documents.

Apparently, this is not the first fire that Blades has experienced. In July 2011, his family was one of the 12 affected families after a massive fire destroyed several homes on Chicken Street in the Airstrip Area. The fire reportedly started at Neri’s Tacos, a popular eatery on the island, and then spread through the neighborhood consuming wooden buildings. The fire was contained hours after with the help of a bucket brigade that assisted the firefighters.
The general public is reminded that they can directly call the SPFD at 206-2372 and the San Pedro Police Formation can be reached at 206-2022.