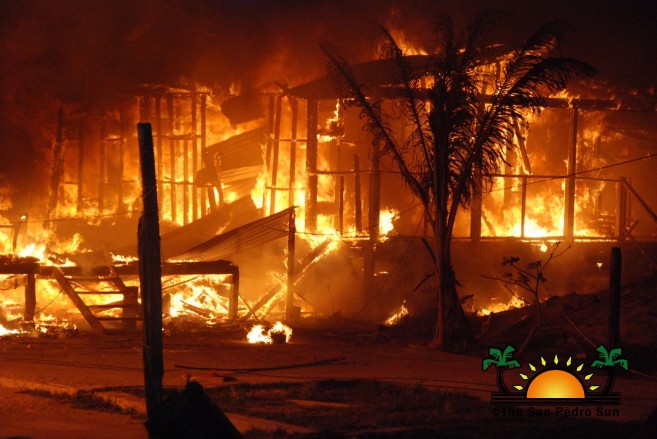 A devastating fire in the Boca del Rio area north of San Pedro Town destroyed six houses early this morning, Saturday, August 4th. The fire reportedly started shortly after 1AM, no injuries have been reported, but many persons are now homeless as the blaze destroyed everything in its path. The fire threatened to spread to nearby houses, but thanks to the efforts from the San Pedro Fire Department and the many volunteers who battled the fire for hours, a larger tragedy was avoided. Residents, however, believe that is time for local and central government authorities to look seriously into this matter and provide the fire department on the island with the adequate resources and equipment to better address such emergencies. 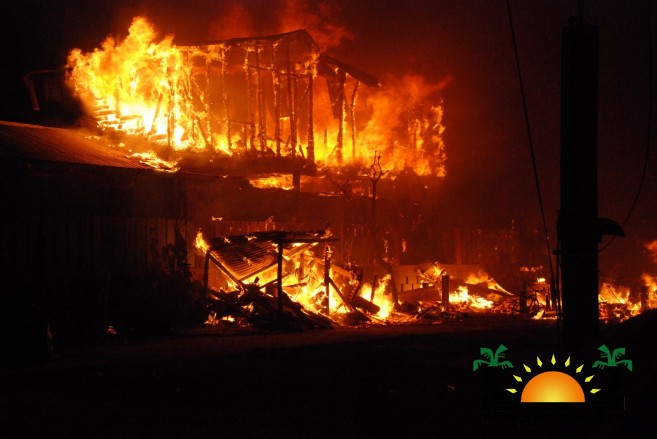 An official report is yet to be issued by the National Fire Service, but a male eyewitness told The San Pedro Sun of how the fire started. The person mentioned that when he stepped out of his house, he noticed one wooden house on fire. The entire neighborhood was put on alert and neighbors made the first attempts to control the fire as they waited for the firefighters. The eyewitness said that because of the winds, the fire quickly gained strength and jumped to other nearby houses. As firefighters and residents joined forces, the fire began to intensify. As the firefighters pumped water from a lagoon, a resort brought their own water pump to assist the fire department in fighting the blaze. Despite their efforts, the flames reached over and between the wooden structures, creating an inferno of sparks and ash that rained over Boca del Rio and nearby San Juan. 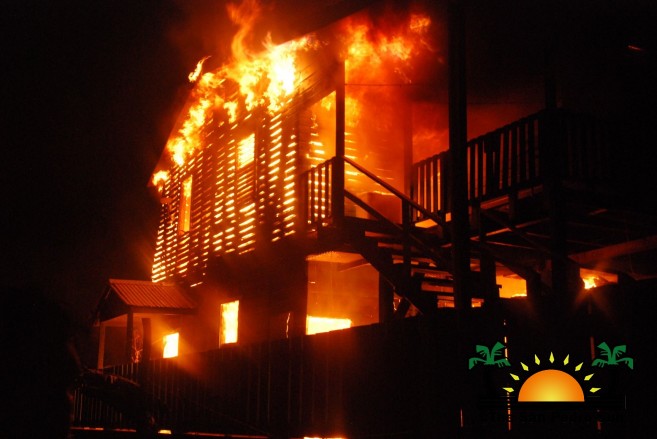 Residents frantically formed a bucket brigade getting water from the lagoon to wet their properties and the already engulfed houses in an attempt to prevent the flames from reaching other homes. In the first hour, all attempts seemed futile as more houses became ablaze, while its occupants tried to save the little they could. “I was only able to get my cell phone,” said one of the victims. “I lost everything, even some savings.” The San Pedro Police Department and members from the National Emergency Management Organization were onsite monitoring and assisting in every way they could. 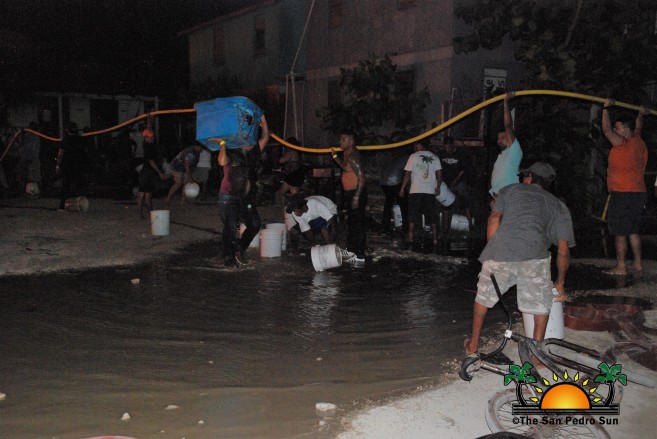 Councilors from The San Pedro Town Council also joined in the efforts as more people showed up to help. Determined to win the fight against the blaze, many islanders dangerously bucket and hosed the giant flames, until finally around 4AM, their perseverance paid off. By this time, no structure was left inhabitable, and the fire gutted all the wooden homes and most of their surroundings. 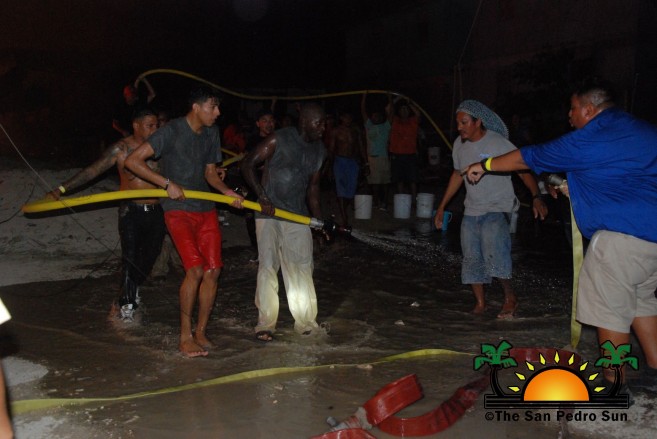 Many of the victims who lost everything are sad, frustrated and some even furious. They wonder when the island will get a proper fire department and the necessary infrastructure so things can are done right. They believe that the recent fires are a wakeup call for the Government to act and a reminder that tragedies like this can be prevented if the required resources are properly allocated. 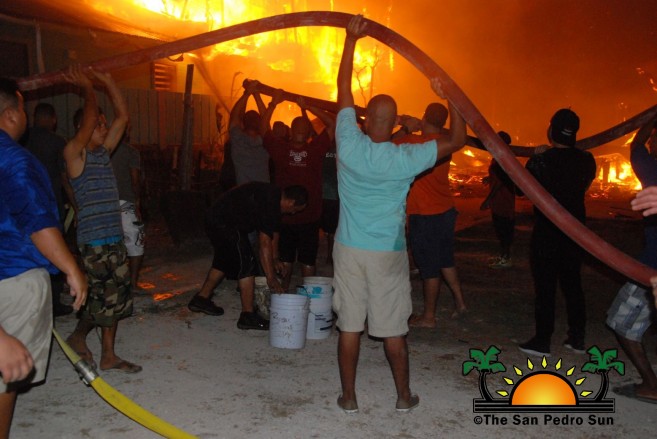 San Pedro has had its share of fires during the past years. In June of 2016, there was a massive fire on Pescador Drive that left 88 islanders homeless. The devastating fire gutted 17 homes shortly after midnight destroying everything in its path. No human casualties were reported, and it was considered the most devastating fire at that time. 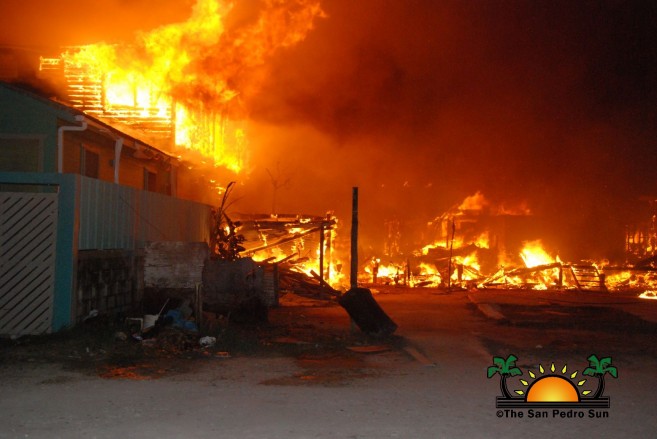 The most tragic fire so far on the island, occurred on June of 2018 in the Escalante Sub-division, south of San Pedro Town. A fire early in the morning destroyed two houses and claimed the lives of four members of the Bacab and Nuñez family. According to reports, the unprecedented tragedy started in a two-story building where 30-year-old Clara Bacab Nuñez and her son 14-year-old Allan Nuñez, daughter 6-year-old Mia Nuñez and niece 16-year-old Lidia Chelin Catzim Bacab were trapped in the inferno, while her husband David Nuñez and older son 16-year-old Samir Nuñez were able to get out badly injured. A tenant living on the ground floor, Tracy Cruz, survived the inferno burning on top of her by escaping with her two young children through a bathroom window. 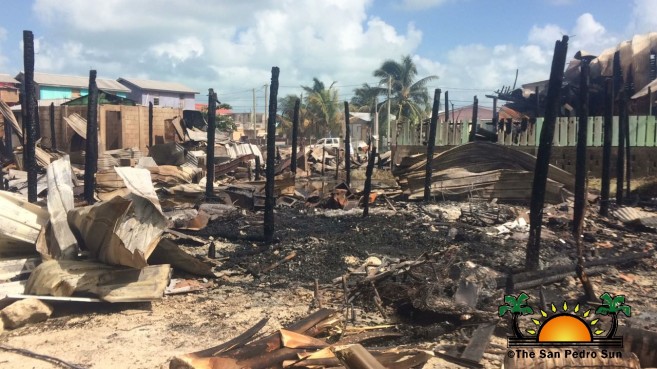 Authorities on the island are still to assess the affected area and seek ways on how to help the fire victims. People are also advised to stay out of the burned area, as clean-up efforts are expected to start taking place soon.

The San Pedro will continue following this developing story.