The northern communities of Belize, including San Pedro Ambergris Caye, are steeped with rich traditions that originated with the arrival of the first settlers in the 1800’s. Such traditions like “Carnavals” were once very strong in these areas of the country, but during the recent decades, activities have been declining dramatically. In an effort to keep the traditions alive, the National Institute of Culture and History (NICH) through the Institute for Social and Cultural Research, launched the second volume of their cultural video series titled “Belize Cultural Celebrations.”
The launching took place at the Paradise Theater on Wednesday, March 2nd in San Pedro Town. The event saw many students from various schools learning the importance of their cultural heritage.
Guillermo “Mito” Paz, director of the San Pedro House of Culture began the event by briefly thanking everyone for attending the official launching and commending the students for being there. This was followed by a beautiful rendition of the National Anthem performed by students of the San Pedro Roman Catholic School. 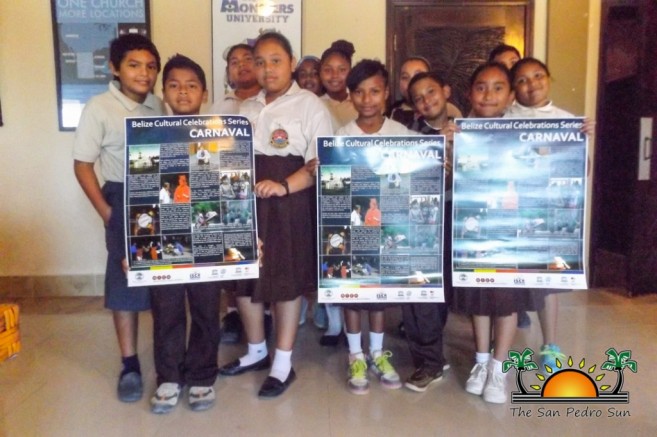 Welcoming the attendees was NICH’s Senior Research and Education Officer Selene Solis. She also presented a colorful poster depicting images of Carnivals, which comes with the video. Solis reminded the students that the carnival tradition in our country shows the colors of the cultures that everyone represent. The video highlighted images of the carnival in San Pedro Town and Caledonia Village, Corozal. Solis hopes that by introducing the video to young students, the tradition will continue and it will alleviate the concern about it disappearing one day. 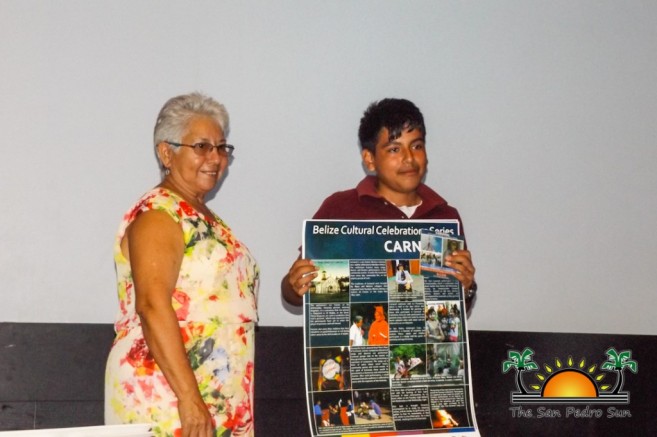 The fifteen minute video summarized the origins of the first carnival celebrations in the Mestizo culture that moved to Northern Belize from Mexico. The film indicates that today, the only place on the mainland of the northern part of the country that still holds the traditional carnival is Caledonia in the Corozal District. San Pedro Town is the other community that has held on to the traditional Carnival every year right before the lenten season. In the video, both carnavals share the same activities, from the pintaderas, comparsas, bull dance, to the burning of Don Juan Carnaval.
Everyone enjoyed the video, specially the students who saw themselves in some of the images on the screen. According to Solis, she feels positive that such cultural presentations will encourage others to support local initiatives and continue spreading the traditions from generation to generation. “This is another step that NICH is taking to expose the importance of preserving our local cultures. Because if we do not take care of our traditions, no one will, so it is our job to keep them around for many years to come,” said Solis. 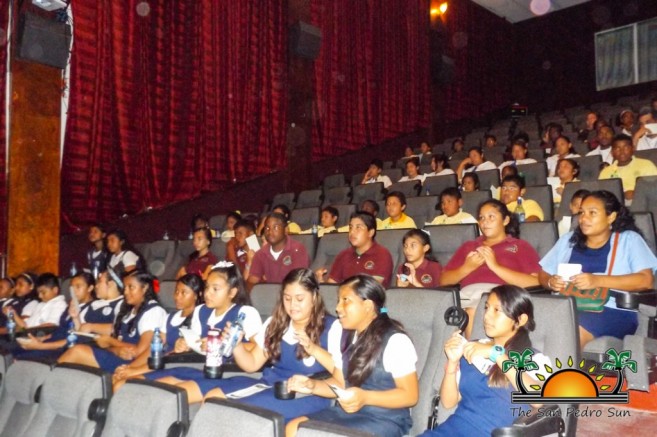 At the end of the event, everyone was presented with a copy of the video along with a copy of the poster by Councilor Flora Ancona from The San Pedro Town Council. Everyone was then invited to some refreshments in the lounge area of the theatre.
NICH would like to thank everyone who contributed in the creativity and research aspect of the video. Special thanks go out to the former Minister of Culture Honorable Manuel Heredia Jr, who was an instrumental guide in the production of the video.
NICH will continue working on cultural projects in an effort to bring awareness to our young Belizeans of the importance of our traditions and keep them active for the benefit of our country and people.