Belize’s Leader of the Opposition Francis Fonseca called on Prime Minister Dean Barrow to “deal with the rot” within his administration during a special sitting of the House of Representative on Friday November 1st in Belmopan City. The meeting was geared to present three significant pieces of legislation; the Immigration Amendment Bill, the Belize Nationality Amendment Bill and the Passport Amendment Bill. The House meeting also saw Belizeans, mobilized by the People’s United Party (PUP) protesting against the scandals that have been plaguing the current administration. 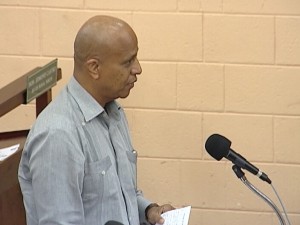 Combined, the three bills seek to tighten up on nationality requirements, establish documentation integrity, increase independent oversight by involving a securitizing committee and impose stiff penalties for those who violate the law – including ministers. In presenting the bills for first reading, Prime Minister Barrow indicated that a key part of the oversight body is the social partners, including the Belize Council of Churches, the Trade Unions and the Belize Chamber of Commerce. “The role of the social partners will be to assist in the vetting process and ultimately if the Minister proceeds to granting of nationalities in circumstances where the committee has said ‘we don’t think things are in order’ then the social partners act as whistleblowers. They alert the public to the fact that something is awry, but they cannot take over the role of the minister,” explained Barrow.

He also said that while his administration is under public pressure because of the Elvin Penner passport and immigration scandal, his administration will not give in and will not “abdicate the mandate” that electors gave the United Democratic Party at the polls in 2012 general election. “We invite partnership, we don’t invite a process where people think they can subordinate the duly elected representative,” PM Barrow stated in relation to the role of the social partner. According to PM Barrow, the social partners will only get to recommend, but cannot appoint a member of the committee. Appointments will be made by the minister. The pieces of legislation that were presented for first reading now go for public consultations.

And while PM Barrow laid three new bills, the PUP brought up the issue of the immigration scandals during presentations on the adjournment. The Opposition Leader told PM Barrow to “deal with the rot” in his administration during a heated exchange which erupted into chaos and saw members of the gallery ejected from inside the building. 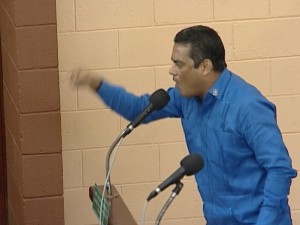 Fonseca demands that PM Barrow “deal with the rot” within his administration. Photo Courtesy Channel 5.

“What is scandalous Mr. Speaker is that the Belizean people still don’t know what these irregularities are. What is this new evidence? It’s really absolutely ridiculous, and we, on behalf of the Belizean people, demand to know what are these new findings. It is not acceptable or satisfactory for them to just come out and say that ‘there are new finding, there is new evidence’ and leave it at that. Mr. Speaker, 42 days later, the Honorable Prime Minister has yet to satisfactorily explain to the Belizean people his decision to negligently and recklessly confer authority on this man [Penner] to sign nationality certificates. Everybody in Belize knew that this was the member for Cayo Northeast weakness and the Prime Minister knew that. At the same time we repeat our demand that the member for Cayo Northeast must resign, he must resign immediately from the National Assembly. Mr. Speaker, the Prime Minister and the United Democratic Party must stop playing games. Publicly they are trying to distance themselves from the member for Cayo Northeast – trying to say that he must resign from the party, he must resign from the National Assembly, yet we all know that privately they are saying to him stay, stay, stay!” said Fonseca.

A jubilant crowd of PUP supporters gathered at the step of The National Assembly Building to protest against the government. Speaking to the press, PUP Party Leader Francis Fonseca said that the protest is the “beginning” of several activities with the goal to “put the UDP out of office.” According to Fonseca, the Dean Barrow government has been “plagued” with “scandal after scandal,” and “has failed” to carry out their mandate to govern.

The PUP has said that they were expecting to mobilize over 1000 supporters. Speaking to the lack of numbers PUP Deputy Leader Julius Espat explained that protest was not about numbers but to register their discontent with the Barrow led Administration. The protest went without incident.