According to latest release by Statistical Institute of Belize (SIB), Belizeans are paying slightly more for basic goods and services than last year through the first quarter of 2019. Figures released by SIB show that the All-Items Consumer Price Index for March 2019 stood at 104.8%, an increase of 0.3 % from 104.5% in March 2018. On average, during the month of Apirl in 2019, the prices of goods and services regularly purchased by Belizean households were 0.3% higher than they were in the same month of 2018. 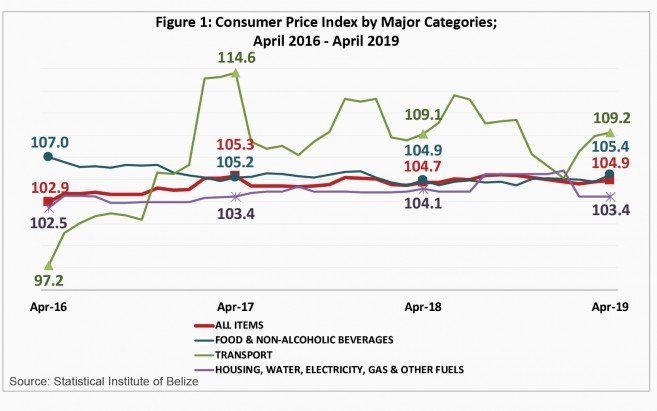 The constant increase in fuel prices caused an uptick of 0.9%, lower premium and regular fuel prices offset by increases for diesel and motor vehicle lubricants. Prices for servicing of vehicles and airfares are also up. Home rental costs are down, especially in Belmopan, Belize City, and Dangriga; but increases in electricity and gas prices offset this.
In the area of food, Belizeans are paying less for red kidney beans, ground beef, chicken and limes, which were scarce at this time last year. But higher prices were recorded for sugar, eggs, some natural meats, milk, and vegetables. Belizeans are also paying more for attending sporting events and secondary school, as well as health and life insurance premiums. According to the report, among the municipalities, it’s a lot easier these days to live in Dangriga as the Culture Capital recorded a negative inflation rate of near 6%, but about a hundred miles south, prices in Punta Gorda Town rose more than 3%. 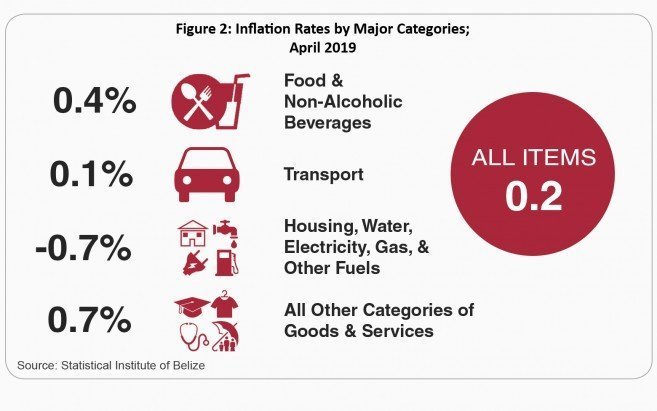 Meanwhile in Merchandise Trade, in March 2019, Belize imported goods valued $147.2 million. This represented a 1.2 percent or $1.7 million increase from the same month last year. Marked decreases across three of the major categories were the main cause of the slight drop in overall imports for the month. Goods classified as ‘Other Manufactures’ fell by $5.4 million, from almost $17 million in March 2018 to $11.6 million in March 2019, on account of fewer purchases of rangefinders, gold jewelry, lamps and lighting fixtures. Merchandise imports for the period January to March 2019 totaled just above $455 million, representing a 5.9 percent or $25.2 million increase from the same three-month period last year.
The total value of Belize’s domestic exports for the month of March 2019 was $25.8 million, down significantly by 54.4% or $30.4 million from the $56.6 million recorded for March 2018. This substantial decline in export earnings for the month was due for the most part to significant reductions in exported quantities of sugar, owing to varying schedules for the shipment of bulk sugar from one year to the next. Merchandise exports for the period January to March 2019 totaled $90.9 million, down 12.9 percent or $13.5 million from that same period last year. 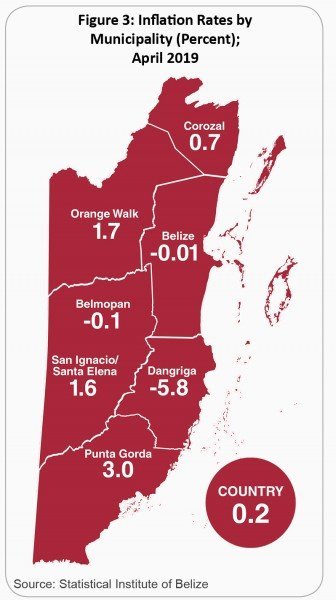 An island residents told The San Pedro Sun that they are petrified by the constant increase of the goods on the island. “When these goods increase I hear a lot of people complaining on the mainland, however, the ones that really suffer are the person living on the island. As the price of goods and services tend to be a higher rate than that of the remaining areas of the country,” said a concerned islander. A business person also shared their concerns, stating “I usually do my shopping for my restaurant on the mainland because here is very expensive. Although I have to travel to Belize City at the end it still comes out cheaper than shopping here on the island.”
The SIB tracks monthly statistics on consumer prices and inflation and twice a year on the employment rate. To learn more about the SIB reports and Belize’s current economic situation you can visit www.sib.org.bz/