A family on Ambergris Caye is mourning the tragic loss of yet another family member as a result of an ongoing rivalry. The victim is 25-year-old Byron Espat Estrada, a boat captain of the San Pedrito area of San Pedro Town. Estrada is the second son in the family to have died under similar, tragic circumstances. Estrada’s younger brother Charlie Espat was one of the two San Pedro teens found partially buried 50 yards off a feeder road in the Orange Walk District on June 9, 2012. Charlie and his cousin Edwardo Alamilla had been reported missing on June 5th and their decomposed bodies were found four days later with apparent gunshot wounds to the head.

According to authorities on the island, Byron Espat Estrada was stabbed at least 22 times inside the men’s bathroom at Daddy Rock Night Club. He collapsed near the bar counter and was taken to the Dr Otto Rodriguez San Pedro PolyClinic II where he was pronounced dead.

Superintendent of Police and officer Commanding San Pedro Police Department Luis Castellanos said that the incident happened around 3:30AM. “On Saturday the 26th of January 2013, at about 3:39AM, police received information of a stabbing incident at the Daddy Rock Disco (Night Club). As a result we quickly responded and upon arriving at the disco we found a young gentleman by the name of Byron Estrada who was seen bleeding from his neck area, his chest and his back,” said Castellanos, who indicated that the victim was taken to the island’s PolyClinic where he was officially pronounced dead at about 4:32AM. “We have launched an investigation to see what actually happened; and who is the perpetrator of this crime. So far we have detained some people for questioning and we believe that one of them may be able to assist us in our investigation…the incident wasn’t a fight. We received information that apparently the victim entered the bathroom and whilst in the bathroom he was stabbed. He came out, while the disco was still in function, and ran towards the bar where he collapsed, and where persons assisted him and took him downstairs. It happened very quickly and it doesn’t look like it was a fight.” Police say that they observed numerous stab wounds to the upper part of the victim’s body, plus cut injuries to the neck area.

And while police investigation into the death is ongoing, the mother of the victim, Pricilla Espat, who has lost two of her sons as a result of crime in less than one-year, explained that police were not compassionate to their pain. “I got a call from my sister-in-law who said that one of the food vendors at the park called to tell her that my son was stabbed badly. The police did not arrived until about an hour after meanwhile he was bleeding to death. I went to the clinic and I was knocking at the door indicating that I was the mother. None of the police would allow me to see him. It was until a long while after, a doctor came and opened the door and told me that he was already dead. I don’t like the way the police treated me…The police are telling me that it happened because my son deals with drugs and those sorts of things…my son is not a drug dealer. I am 100% sure my son is not a drug dealer because he works hard.” The very upset mother said that her son’s life was threatened the morning previous to the incident by the same person who was implicated in the murder of her first murdered son, Charlie. “The morning before the incident, my son was threatened and the person said that one by one my sons will die. We already told the police the information,” said the single mother.

According to Superintendent Castellanos, they received that complaint after the murder and are also considering the information as part of the ongoing investigation. “The family of Estrada is alleging that there was some confrontation earlier that morning; however they did not make an official report. It was after the fact (murder) that we understand that there was some threat, some altercation with some persons. But officially, she mentioned it afterwards…We brought the person in for questioning, and like I said, the person who would have been the virtual complainer is now deceased, and to verify his version, it would be difficult for us to confirm that the person we detained (a minor) indeed carried out that threat.”

Less than 48 hours later, San Pedro Police charged one person for his murder. Following a group identification on Monday January 28th, 33 year old Edward Barahona of an Escalante Area address was positively identified by witnesses as the person responsible for the murder. As such, police formally arrested and charged Barahona for the crime of murder.

While no murder weapon has been found, what appears to be blood on clothing inside Barahona’s home will undergo full forensic testing. “We found, what we would say, appears to be blood on the clothing of a gentleman but yet we cannot confirm who’s blood it is. When the forensic scientists do their part, we would be able to confirm if it is blood or not,” added Castellanos. 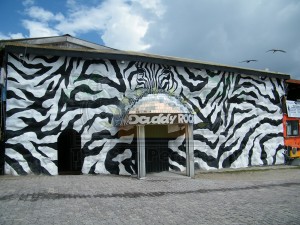 What no one would explain is the fact that a knife (murder weapon) was introduced into the club, especially since one of the conditions for clubs to operate adequate safety procedures, including security. According to Castellanos, the club had permission to operate beyond 3AM; something Mayor Daniel Guerrero explained was permitted because of an extension granted by the San Pedro Town Council. “The club had an extension so it was operating under the legal aspect of the law. We finished with the crime scene, and the Scenes of Crime officers completed their necessary tasks at the bar, and afterwards we released the club back to the owner. The club had it secured and they were conducting searches. How the person introduced the knife inside is something else; not everyone got searched because somehow or the other it (the knife) was introduced… They have their security but how the knife was introduced remains a question,” said the police.

While someone was stabbed multiple times inside the club, which by police account did not follow proper guidelines to ensure maximum safety and is not able to account how a murder weapon was introduced into the club, it was back in operation the night following the murder. According to Mayor Guerrero, that is because it is an issue that should be addressed by the San Pedro Liquor Licensing Board. “The liquor board and the San Pedro Town Council will have to review the incident,” said Guerrero. “One person has been killed; we should [prevent…these events]. We will be speaking to the two nightclubs and see how we can ensure better security for the benefit of our children and our tourists who go to these clubs.” The San Pedro Sun attempted to speak to the proprietor of the nightclub but he indicated that the only statement that will be made is to the Police Department.

The motive of the murder has not being ascertained as yet, but police strongly believe that is as a result of drugs and an ongoing rivalry between two groups of people on the island. Estrada’s body has since been taken to the Karl Heusner Memorial Hospital (KHMH) morgue where a postmortem is scheduled for Tuesday, January 29th. Police asks members of the community to please come forward if they have any information that can assist them in their ongoing investigation into the murder of Byron Estrada.