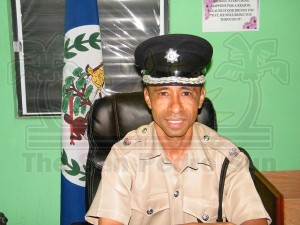 According to Superintendent of Police Luis Castellaños, Officer in Charge of the Coastal Executive Unit and the head of the San Pedro Police Formation, the statistics allow them to see the crime trend on the island. “The entire island has been divided into four areas. This helps us to see which areas need more focus. Once the island was divided, we began marking the various places where crimes were committed and reported,” said Castellaños. Section One covers the entire northern part of Ambergris Caye; from the Sir Barry Bowen Bridge, through San Mateo and on to the end of the island including San Mateo. Section Two is from the bridge to the Mar de Tumbo area including San Pedrito. Section Three is from Mar de Tumbo southwards to the Mosquito Coast and includes DFC area, and section four is from Mosquito Coast to the southern end of the island.

Statistics from the San Pedro Police Department show that most of the reported crimes were committed in sections two and three. “The area where most major crime was committed is the downtown area, which is a part of section two” said Catellaños. The two most reported crimes are burglary and theft. In the month of August alone, eight thefts were reported while burglaries stayed at five reported cases. This is a little more than the same period in 2012.

The statistics show figures from January to August for both 2012 and 2013. It shows that there were three murders in 2013 since January. Those three murders were that of Byron Espat in January, Eugene “Cobra” Lockwood in April and Jeremy Baptist (body still not found) in May. In 2012 there was no murders for the same period; for the entire 2012 there were two murders – Emerito Itza and Gregory Faull (unsolved).

Police figures also show that crime went up by 32.35% from January to August in 2013 when compared to the same period last year. 92 major crimes were reported in 2012, compared to 136 in 2013 for the first eight months of the year. So far there have been 68 cases of reported burglaries and 53 cases of theft. “We have increased our policing anti-crime efforts in various areas of community policing,” said Castellaños. “We are doing a lot more foot and mobile patrols as well as stop searches on people. We want to assure the public that we are doing everything within our means to ensuring crime is as low as possible.”

The San Pedro Police Department hopes that by doing more mobile and foot patrols and stop searches, it will help the department address the increase in crime, particularly in the downtown areas. Police are also visiting businesses and homes as well as conducting lectures to various community groups to get the residents involved in the fight against crime.

The police advise the community that if you see or suspect a crime, to call their hotline number at 911 or 206-2022.