Ramon’s Village Resort, an iconic tourism establishment on Ambergris Caye, located on Coconut Drive has suffered major damages after a fire ravaged through its grounds. The fire started shortly around 7:52PM on Tuesday, August 27th when a building in the southern section of the resort caught fire. It took almost 2 ½ hours before the fire was brought under control. A total of 29 of the 71 units were destroyed at the resort, which is estimated to have a real estate value of US $8 million. Neighboring structures received minimal damages and electricity to the entire island was interrupted for nearly an hour while guests from the resort and neighboring buildings were evacuated. 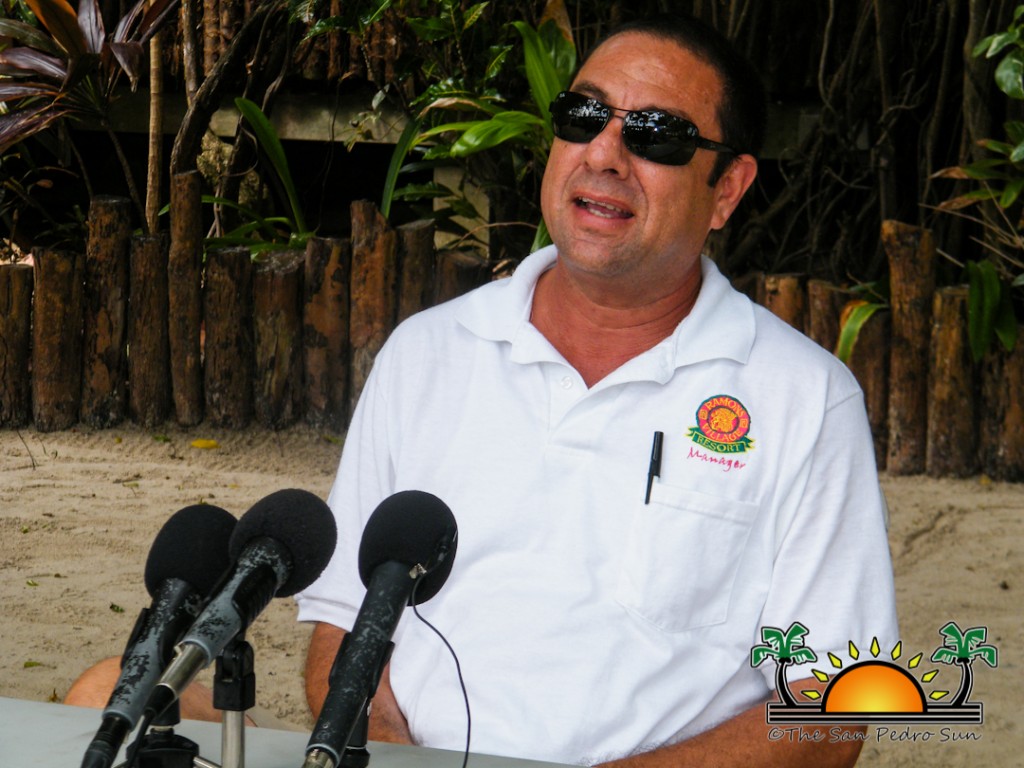 “I was at the end of the dock walking towards the property when I saw the smoke and sparks and hurried to the area,” said Einer Gomez, Manager of Ramon’s Village Resort. “At first I thought  it was across the street but I called the front desk to ask the security to run by that area. We basically got there together and we saw flames coming out from one of the huts. We also called the Fire Department to notify them about the fire.” 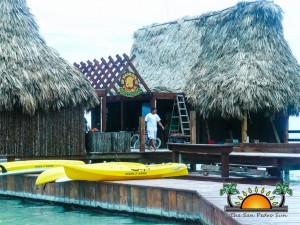 The San Pedro Fire Department responded shortly after receiving the call, but faced several challenges. A section of Coconut Drive, including the access to Ramon’s Village is currently undergoing major street updates, and this caused limited access to the fire. Adding to the extenuating circumstances was low water pressure from the fire hydrants after electricity was cut off at 8:30PM. A message from Belize Electricity Limited sent out at 9PM indicated that an emergency power interruption was necessary “to mitigate damages from [the fire] within close proximity to [the] transmission line.”
Initial investigation revealed that the fire originated at the roof top of unit 15 which was occupied by two guests and flames rapidly spread to the other units. According to Orin Smith, Station Officer and Lead investigator at the Belize Fire Department, they got the call shortly before 8PM that a structure at Ramon’s Village Resort was on fire. “We brought the fire under control shortly after 10PM, but total extinguishing took more time. What transpired is that we are entirely surrounded by water but access to water is not that easy. We do believe the Fire Department in San Pedro Town has the capability to handle a large fire but it has to do a lot with how fast the fire is discovered, the material – because if you leave the fire to be too large before you respond then it can get out of hand. At this point we cannot say what started the fire as the investigation is in its early stages. What I can tell you is that the property is insured,” said Smith. Besides the 29 rooms, the laundry room, kitchen, gift shop, bar, office, reservation and waiting area were completely gutted by fire. All structures consisted of Pimento, hard wood, sheet-rock and thatch roof. 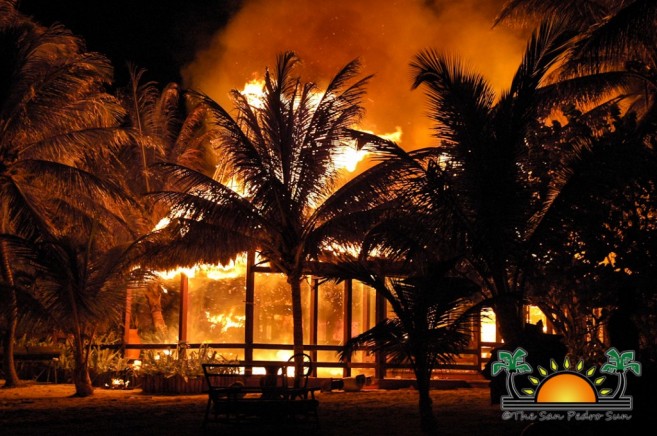 Gomez said that his immediate reaction was to get his staff and guests out of the area and into a safe place. “We kept going and alerted the rest of the staff and asked them to take out the bigger fire extinguisher to bring down the flames.We also identify the hoses and other water outlets in the area and tried to contain the flames. We called all our guests and most of them were having dinner so we didn’t have to go in and wake up anyone because they were already out,” said Gomez.
A total of 22 guests were at the resort at the time of the fire. About three of them lost all of their belongings, including travel documents. One of those guests was Italian national Simone Micheletti. According to Micheletti he was out of his room when he was alerted that Ramon’s Village Resort was on fire. “Fortunately for me, I left the hotel a couple of minutes before the fire started and we arrived at the restaurant where we were informed that the hotel section was burning. I ran back to the building but it was already on fire. In a couple of minutes the fire burned most of the resort. It was impossible to get our luggage back. We went as far as we could to salvage our belonging but we were moved out because of the propane gas (butane) tank and so we started moving out. There was some wind and all the leaves from the palms were just burning and they were just flying in various direction. At least we were not hurt. There are no words to describe how it felt to see the hotel go up in flames and see the place destroyed, the people working there, there are not enough words to describe how it feels.” 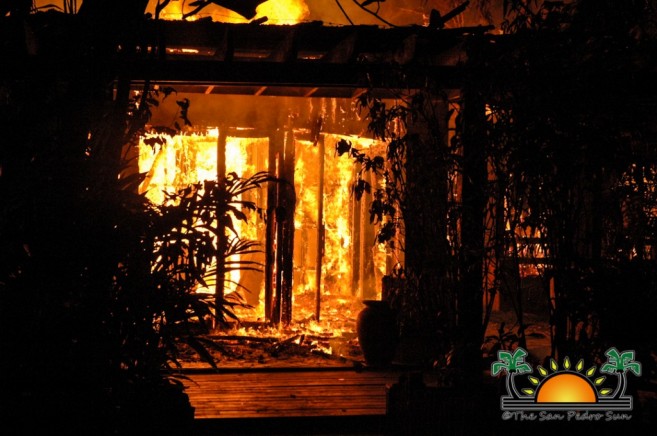 Fortunately no one was injured in the fire, and according to Belize Tourism Director Laura Esquivel-Frampton the affected guests are being assisted by the Ministry of Tourism. “We are currently working with the affected tourists (the three that lost either luggage and/or documents) to have them make all the connection with their embassy and consulate to get the documents needed so they can travel out of the country. We also contacted the Immigration Department so that they can leave Belize [despite not having] their documents. We are trying to make them feel comfortable. We are also getting some clothing for those who lost their clothes. Most of the guests have been moved to other hotels, and from what we can tell, it’s only three guests who lost their belongings.”

As the fire quickly engulfed the thatch roofs, a large crowd gathered at all corners of the resort. One of those residents on the scene was the Minister of Tourism and Area Representative Manuel Heredia Jr. “It is definitely a loss to our local tourism industry. We will render as much support to the management and staff because this resort has been a leading institution in tourism, not only on the island but in the country,” commented Heredia to The San Pedro Sun as he observed from a distance the island’s prime resort going up in a blaze. 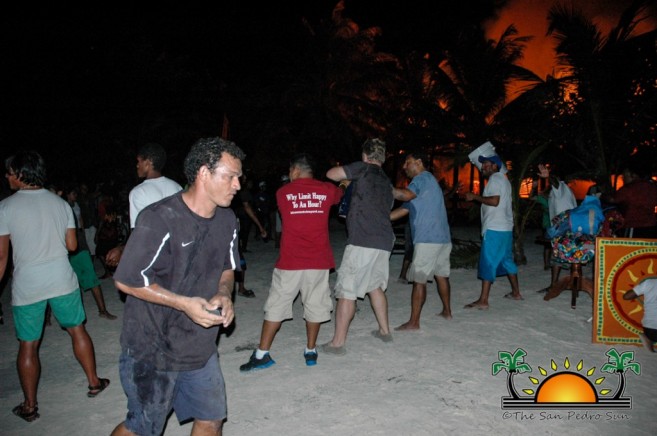 Residents living around the resort as well as guests from neighboring resorts were evacuated as a precautionary measure. Local residents formed a bucket brigade to assist the local firefighters to bring the fire under control. “I really want to thank the community. We felt the love of the community. It is really gratifying for the staff, and I am quite sure that every member of the staff feels the way I do. The comments, the good wishes, the help that we have received from the entire community is overwhelming and I have to publicly thank them. Ramon’s has always given to the community and now I see the community giving back to us and we really appreciate it,” said an emotional Gomez. 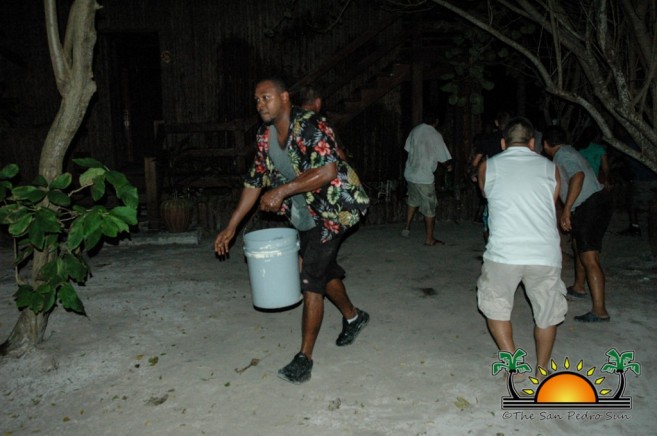 “I have been working here for 20 years. My oldest son has not seen me work in any other place. Ramon’s Village Resort is my second home and my second family and the rest is history,” said Gomez. The resort employs over 70 people and according to Gomez, all are affected, but he remains confident that Ramon’s Village Resort will rise from the ashes. “We still have one of the best staff, and all of them went beyond their call of duty to help salvage what they also consider to be a part of them. I assure them that they are still employees of Ramon’s Village and that the resort will continue and will rebuild and will still be the iconic establishment we have always built.”

“We cannot say thank you enough to all of the people who fought this fire and helped us save as much of Ramon’s Village Resort as possible,” noted Ramon Nuñez, General Manager of Ramon’s. “While we have suffered a tremendous loss, you can be assured that we are doing everything possible to ensure that our guests are taken care of as we begin assessing the damage.”
Meanwhile Richard Headrick, owner of Ramon’s Village Resort, was relieved that no injuries were reported; however, he was saddened at the loss. “Our hearts are broken that our beloved Ramon’s has suffered such damage. Over the past twenty-seven years, tens of thousands of guests have visited Ramon’s Village and had the time of their lives. However, out of adversity comes steadfastness and you can be assured that very soon the rebuilding of Ramon’s Village Resort will begin. In a short time, the Ramon’s Village that our many guests and friends have come to love and adore will be back hosting guests and Lord willing, our little piece of paradise will be better than ever!”

Ramon’s Dive Shop is fully operational and in a few days, the undamaged area of the resort will be operating as soon as the utility companies have conducted repairs in the area. “Ramon’s will be operational as a room and dive shop in a matter of days,” said Gomez. But for the long term, it is uncertain how long it will take to rebuild the award winning resort back to its original glory.

The cause of the fire is unknown at this time and so far the management of the resort has been unable to estimate the total loss since the investigation is yet in its early stage. Last year, the resort completed major renovations with an investment that was estimated to have cost millions.
Ramon’s Village Resort is one of the oldest resorts on the island and has been in operation since 1982. Our thoughts as well as that of the community are with the staff, management and owners of Ramon’s Village Resort.