On Thursday, March 20th a contingency of law enforcement agencies consisting of members of Belize Police Gang Suppression Unit (GSU) and the Belize Defense Force (BDF) descended on the island to tackle the current surge in crime. The team consisted of 47 personnel, mostly from the Eastern Police Division which is the police jurisdiction that includes the islands. The operation ran from Thursday, March 20th through Saturday, March 22nd, during which time the officers confiscated a large quantity of drugs and a firearm. 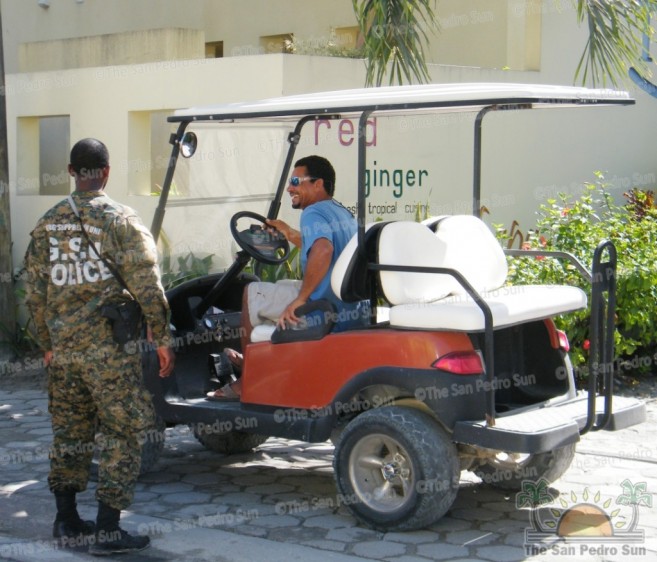 The operation was led by Senior Superintendent Edward Broaster, and forming part of the team was the Commander and Superintendent of the Gang Suppression Unit (GSU) Lindel Flowers. In an interview with The San Pedro Sun, Broaster said the operation included personal, home and property searches based on suspicions of illegal activities as well as vehicular check points and mobile and foot patrols in troublesome areas of town. Patrols were also conducted via boat vessels along the coasts of the island including north Ambergris Caye. “We want to ensure that San Pedro continues to be the tranquil place it is known for and for the residents and our tourists to enjoy the island for what it is,” said Broaster.
Officers have reported that the operation proved to be successful, with 250 personal searches, 20 property searches, 10 base searches and 250 vehicle searches. A total of 11 people were arrested: eight persons for possession of controlled drugs, one person for contraband, one person for possession of a crack pipe, and one person for failing to report (deportee).
Large amounts of illegal drugs were seized during the three-day operation. Drugs found included 1,215.4 grams of cocaine and 1,097.3 grams of cannabis. Other items seized by the police included: one 4.5 inch long crack pipe, one marijuana plant measuring 1.5 feet, one 9mm Luger CZ 110 firearm with a magazine containing three live rounds of 9mm ammunition, one liter Teachers Whisky, three liters Bacardi White Rum, one liter Label 5 Whisky.

At about 9:15AM while conducting operations in the San Mateo Area, San Pedro Town, police searched an area in the garbage site where a black plastic bag was found containing suspected cannabis. No one was in the immediate area during the time of the discovery. As a result the bag was brought to the San Pedro Police Station where it was weighed and amounted to 540 grams of suspected cannabis. It was sealed in an envelope and deposited as found property.

Alison Hemsly was detained for possession of controlled drugs for 2.6 grams of cannabis which was found on his person.

Jaime Chaveria, Lincoln Robinson and a minor were also arrested and charged for possession of controlled drugs which was for 8.9 grams of cannabis.

At around 6:30PM search was conducted near the residence of a known drug dealer in the San Juan Area which led to the discovery of a parcel hidden within the mangrove system in the area containing suspected cocaine with marking “323 for tuna”. The suspected drug amount 1,210 grams.It was labeled and deposited as found property as no one was in the area at the time.

Alvin Arrana was detained for possession of a metal pipe 4.5 inches long. He was caught via a tip.

At about 9:15PM, police officers on operation in the Bayside Area, San Pedro Town, conducted a search on an empty lot whereby a black Chivas Regal Whiskey sky box containing five plastic bags, containing suspected cannabis was found. No one was in the immediate area during the time of the discovery. The bag was brought to the San Pedro Police station where it was weighed and amounted to 477 grams of suspected cannabis. It was sealed in an envelope and deposited as found property.

At about 9:48AM, while on operation in the San Pedrito Area, San Pedro Town, police conducted a search on an empty bushy lot whereby a transparent plastic bag, containing suspected cocaine was found.No one was in the immediate area during the time of the discovery. The suspected drug was weighed and amounted to 5.4 grams.It was sealed in an envelope and deposited as found property.
Possession of Controlled Drugs

Mario Graniel was detained for possession of a controlled drug: 2.9 grams of suspected cannabis.

A search was conducted on Jamie Young, who was seen alighting from a water taxi coming Belize City. He was found carrying a black plastic bag containing 55.2 grams of suspected cannabis. He was escorted to the police station and charged for possession of a controlled drug. 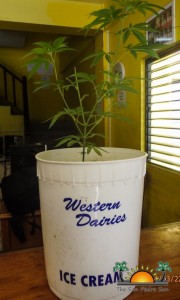 A search was conducted on the mangrove system in the Boca del Rio area. A small bucket was found containing a marijuana plant.

At about 10:30AM, police conducted a search at an empty lot on Pescador Drive San Pedro Town, AC. As a result of the search, a 9mm Luger CZ 110 firearm wrapped on a grey shirt hidden under some debris was found in the yard.No one was in the immediate area and the firearm was taken to the San Pedro Police Station and labeled as ‘exhibit’.

Broaster said the operation was a direct result of residents as well as tourism stakeholder’s complaints about the spike in crime. For a few weeks, residents of Ambergris Caye had been calling on the government for immediate action. The sentiments were echoed during a peace rally two weeks ago in which over 400 islanders demanded that the elected leaders take measures to bring the island back to normality.
While in San Pedro Town, Broaster took the opportunity to advise residents that one of the most effective ways the community can do their part in making the island a safer place for the long term, is by forming neighborhood watch groups and by working hand in hand with the police.

Under the Stars: Alberto Moreno and Oliva Galves