It was no easy match for the San Pedro Tigersharks when they faced off against Belize City Smart No Limits in week ten of the National Elite Basketball League (NEBL). The game took place at the Rafael Angel Nuñez Auditorium on Saturday April 12th. Belize City Smart No Limits brought their A-game, giving the home team a wake-up call and much excitement and anxiety to home crowd. 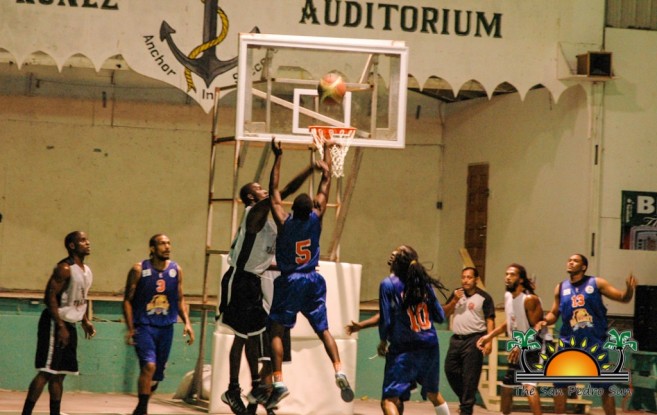 The visiting Belize City team came out strong when Greg Rudon passed the first ball of the game to Brandon Rogers. Rogers moved Tigersharks’ Michael Adams out of the way easily opening the scoreboard with a two-point shot. The Tigersharks were forced to respond and Tyrone Edwards quickly crossed over the ball to Darwin Leslie to push the first two points for the home team. Ashton Edward followed with a three-point shot plus a free throw, giving the home team a four-point lead. At the end of the first quarter, the home team led the visitors 24 to 18. 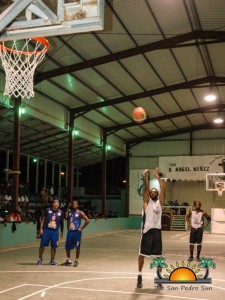 When the game resumed, Greg Rudon of Belize City picked up a missed shot from Kevin Domingo and caught the first of a series of points in the second quarter. Tigersharks’ Winston Pratt made an impressive play after he picked up a loose ball from No Limit sinking a three-point shot into the basket in front of a frozen Kevin Lorenzo. Pratt’s impressive performance was his second appearance for the night in which he picked up 20 points for the home team. Just before the halftime break, a crash between Pratt and Rudon sent Pratt to the ground smashing his forehead and temporarily stopping the game. He continued with the game later after he got a bandage over the swollen and bleeding right eye. At the half, the Islanders boasted a 40 to 33 lead over the city boys.
However, No Limits came out fired up for a challenge in the third quarter. Brandon Rogers and Rudon, who scored 29 points alone for night, led the charge, capitalizing on a three-point play to start the quarter. Then Rudon return for another three-pointer cutting the Smart No Limit deficit to a mere single point. San Pedro Tigersharks struggled to keep up against the renewed vigor of the Smart No Limits team for the entire quarter but at the end of the third quarter, the visiting team had a one point lead.
Winston Pratt became a force to reckon with in the fourth quarter, putting the Tigersharks back on track feet when he scored the first two points to give the home team slim one-point lead. He capitalized on yet another break when he got the ball from Darwin Leslie to slam two more points for the home team. 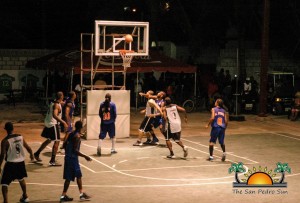 With four minutes to go before the end of the game, Smart No Limits’ main player Greg Rudon made a spectacular move, capitalizing on a three-point shot then catching a free throw, turning over the game and giving the visitors a four point lead. Moments later Darwin Leslie of the Tighersharks picked up a loose ball catching a two-point, putting the islanders back into the game. Fast forward to crunch time and Leslie come up with two free throws that extended San Pedro’s lead to four points. No Limit pressured at the last minute of the game, but back-to-back blocks from 6’11” inches Michael Adams swatted away the golden opportunity of the city boys. San Pedro Tigersharks picked up their eighth consecutive win, finishing the game at 84 to 81 in favor of the home team.
In other NEBL games; Belmopan Bandits hijacked the Orange Walk Running Rebels 95 to 77. Dangriga Warriors skewered the Toledo Diplomats in an 81 to 53 game while the Cayo Western Ballaz doused off Corozal Heats with an 80 to 65 point game.

The NEBL takes a pause for the Easter Holidays, but when it resumes on April 26th, The San Pedro Tighersharks will play the most anticipated match of the season. They will face off against The Cayo Western Ballaz at the Sacred Heart College Auditorium. The two teams have 28 points apiece in the league and they have each lost a single match. It’s time to step it up Tighersharks!

Letter to the Editor: Marco Gonzalez Maya Site says thanks