The Rotary Club of Ambergris Caye swore in its new president Paul DuVille, on Wednesday, July 4th during a lunch and fellowship meeting held at Pier 366 Restaurant at Banyan Bay Beach Resort. Past president Andrew Ashcroft hosted the meeting which also saw the appointment of the Club’s secretary, and its treasurer, for the 2018-2019 period. 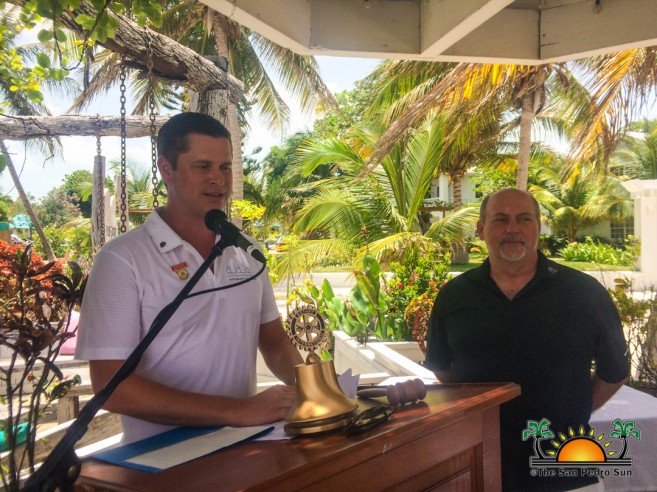 Ashcroft, wearing his late grandfather Eric Ashcroft’s Rotary pin, opened the event at 12PM with his final speech as president before a handful of Rotarians and invited guests. He stated that Rotary has been a big part of his life and his family’s. One of his goals during his presidency was to increase membership, noting the Club’s successful membership drive in March of this year. The past president gave highlights of the Club’s achievements during the past year, and praised to the success of the newly formed Rotaract Club on the island, crediting Kate Corrigan for taking the initiative. Before Ashcroft ended, he commended their Lobsterfest Chairs for Charity fundraiser raised almost $8,000 on June 23rd. He then passed the gavel to DuVille, congratulating and thanking him for taking on the duties and responsibilities of President for 2018-2019. 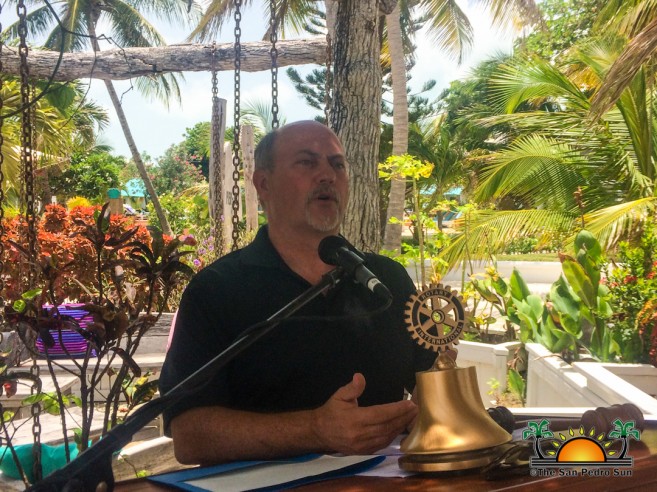 DuVille addressed the small gathering, stating that one of his first priorities will be completing the Foundation Certification for the Club. DuVille recalled the first meeting at Fido’s Restaurant and Courtyard on the island two years ago, where there was talk about forming a Rotary Club in San Pedro. According to him, half of the people who attended that meeting dropped out before the Club was chartered. He commended Ashcroft for trying to build membership during his tenure.

DuVille credits Barry Rassin, President of Rotary International for encouraging him to be inspirational. He ended his speech stating he would do his best to inspire and lead the Club.

Afterward, the new Club Executive body was officially pinned. The short ceremony saw past President Ashcroft, and new president DuVille pinned. The Club’s secretary Dianne Davison, treasurer Christina Potvin and president-elect for 2019-2020 Kate Corrigan, also received their pins. Before the meeting was dismissed, everyone was encouraged to register to attend the upcoming events in Belize City, which Rotary International President Rassin will be hosting from July 24th to the 26th.

The Rotary Club of Ambergris Caye was officially charted on May 25, 2016. The unveiling came through Rotary International, making the local Club one of over 70 clubs in District 4250, which consists of Belize, Guatemala, and Honduras.