Both the House of Representatives and the Senate passed the Belize Territorial Dispute Referendum Bill 2019, which will give way to hosting a national referendum on whether to settle the ongoing dispute with Guatemala at the International Court of Justice (ICJ). The bill was first debated at the House on Friday, April 12th, where after a long and heated discussion, was passed with a total of 18 votes in favor, 11 against and one abstention. On Monday, April 15th, it was debated in the Senate where once again, after a long day of presentations from the different Senators, it was passed later in the evening with eight votes in favor, four against and one abstention. The bill will now go to the Governor General’s office for his signature, and the referendum could take place on May 8, 2019. 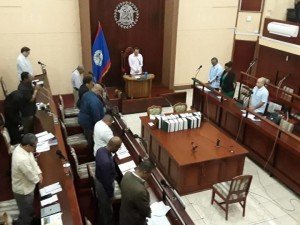 The referendum was initially scheduled for April 10th but was halted by the Supreme Court after granting an injunction requested by the Opposition People’s United Party (PUP). The allegation was that the government had to debate the idea of holding a referendum through the House of Representatives and the Senate before it could be approved. That is what the government of Prime Minister Right Honourable Dean Barrow did, and on Friday, the House debated the Bill.
At the beginning of the session, Barrow introduced the Bill for the provision of a referendum in which Belizeans will be asked to vote either ‘Yes’ or ‘No,’ on whether the ICJ should end with the ongoing territorial dispute with Guatemala. Barrow stressed that the Belizean people have the right to decide on the matter and that the Opposition was depriving them of such right. Opposition Leader Honourable John Briceño, strongly objected for the Bill to be debated stating that there was no urgency to rush the bill. Briceños’ concern was the Special Agreement that gave way for a possible referendum. “Why is it that the Prime Minister has not brought the Special Agreement for us to have a debate on?” questioned Briceño. “That is what we need to do in the House.” The PUP pointed out that the Referendum Bill would not have reached the House if the Special Agreement had been debated prior to it being signed back in 2008. The ruling United Democratic Party’s (UDP) government responded by indicating that the PUP only wants to disrupt the referendum process. 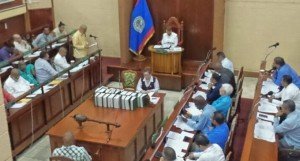 The UDP argued that the Special Agreement had not changed since its initial negotiation when it was drafted and approved by the PUP and a battery of international legal experts before 2008. The UDP members further called out the Opposition for making the process a difficult one because the UDP are the ones implementing something that they (PUP) began. The PUP was described by the ruling party as ‘obstructionists,’ trying to delay the implementation of the Special Agreement by way of the referendum and stopping the Belizean people from excising their vote. The Opposition denied those accusations stating that all they want is to ensure that the referendum is not rushed, but done right.
The debate was robust as both sides presented their arguments with great passion late into the evening. At the end of the day, all the PUP members of the House voted against the Bill except PUP former Prime Minister Right Honourable Said Musa, who abstained. The 18 UDP representatives in the House, all voted in favor of passing the Bill. 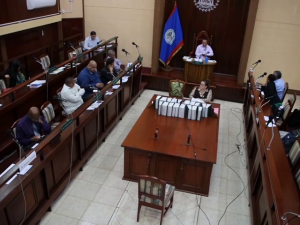 On Monday, April 15th, another heated and emotional debate took place at the Senate. As the debate opened, Senators representing the UDP, PUP, the business sector, Church, Non-Governmental Organizations, and trade unions made their presentations regarding the Referendum Bill. PUP Senator Eamon Courtenay pointed out that his party is now considering the new legislation which sees the potential holding of the referendum properly authorized by law. “The point I wish to emphasize, however, is that we need to get it right and the appeal I have is for us as Belizeans to join forces and approach the issue in a responsible way,” said Courtenay.
The Senator representing the business sector Mark Lizarraga emphasized the need to protect Belize’s borders. “Let’s get it right; this is an opportunity; the law will pass. Let’s give the legal process a chance to work,” he said. UDP Senator Michael Peyrefitte defended the government’s position before the postponement of the referendum. He stated that the government had done everything according to law. He claimed that the Chief Justice at the Supreme Court indicated that there was nothing wrong with the treaty (Special Agreement). He asked the Opposition to stop promoting negativity and misleading the people when it comes to the legality of the referendum process before the House and Senate’s debates.
The vote at the end of the day ended in a divided vote shortly after 4PM. There was an abstention by PUP Senator Valerie Woods, who spoke emotionally about the referendum and the territorial dispute. Four votes were against the Bill, while eight voted towards it, including 13th Senator Osmany Salas.
Following the passing of the Belize Territorial Dispute Referendum Bill 2019, Prime Minister Barrow is expected to request a writ of the referendum from the Governor General within ten days. The new referendum date, May 8th, will then be confirmed by the government.