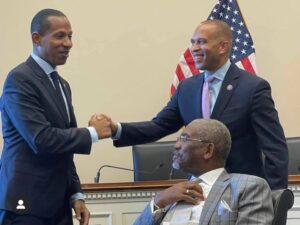 Barrow (l) meeting with Congressman Hakeem Jefferies, Chairman of the US House of Representatives Dem. Caucus

The Leader of the Opposition for the United Democratic Party (UDP), the Honourable Moses ‘Shyne’ Barrow, returned to Belize this week after a two-week official tour in the United States of America. Barrow had a full schedule and met members of the United States (U.S.) congress among other officials in different cities. He also met with members of the Belize Diaspora. At a press conference on Tuesday, August 31st, Barrow said that several cities are preparing to establish sister-city relations with Belizean municipalities: benefiting the country’s tourism product.

Barrow was born in Belize but moved to New York City as a child. He had a music career there until 2001, when he was convicted of assault and sentenced to ten years in prison. He was deported to Belize after his incarceration in 2009 and was declared Belize’s Music Ambassador in 2010. In June 2021 he was sworn in as the Leader of the Opposition. Recently, Barrow was issued a diplomatic U.S. visa through the Ministry of Foreign Affairs after presenting his itinerary with confirmed meetings with U.S. officials.

Some of the states he visited included New Jersey, New York, and the cities of Savannah and Atlanta in Georgia, to name a few. Barrow said that through his contacts, talented Belizean’s benefit would not only benefit but also the country’s tourism product. 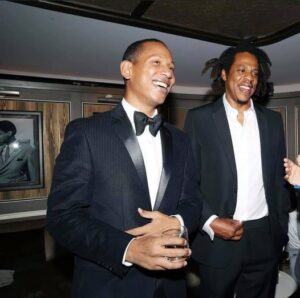 Barrow did not respond to comments from the Minister of Tourism and Diaspora Relations Honourable Anthony Mahler, who said that some of his meetings involved celebrities like Jay-Z have little benefit to Belize. Barrow responded that he would be meeting with Mahler next week. The Opposition leader reiterated that this tour was for Belize, and it has nothing to do with himself. “It was not about Shyne being back; it was about the Leader of the Opposition, the member of Mesopotamia, being back in the United States representing Belize,” he said. Barrow clarified that Belizean taxpayer dollars did not finance the tour but himself and donors/colleagues in the USA.

During his tour, Barrow kept his followers updated via social media. He also said that Minister Mahler and even Prime Minister Honourable John Briceño were briefed on his abroad activities.

The Orange-breasted Falcon, a species in peril or a bright future?