The situation with aggressive and abusive dogs in certain subdivisions of San Pedro Town is becoming a concern as residents have reported attacks on their pets while in public areas. Many of these injured pets have reportedly ended up at the Saga Humane Society for treatment. A recent incident in which a dog was badly injured by one of these aggressive dogs has prompted Saga to seek a meeting with the San Pedro Town Council and police, to look into the Belize Dog Act and enforce regulations that will make public areas (such as streets) safe for all pets. 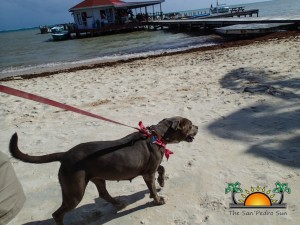 Dogs should always be leashed in public to avoid accidents

Saga shared that the situation is alarming and pet owners with aggressive animals should take the necessary measures to avoid such incidents. They recommend that dogs be collared and leashed while out in public areas. According to reports, most of the recent attacks have occurred when someone would be walking their dog on the street. Without warning, the dog of someone nearby would become aggressive and attack. This behavior is not only considered dangerous for pets but small children as well. It is a matter that demands immediate attention and the cooperation of pet owners is encouraged.

The Belize Dog Act was first introduced (enforced) in San Pedro in August 2015. According to Section 10 (1) of the Dog Act of The Substantive Laws of Belize, Revised Edition 2000, “Whenever a dog is seen in a town, on a highway or in a place of public resort in any of the following cases- (a) not having a collar/leash with a licensing badge for the current year attached thereto; or (b) appearing to be a stray or ownerless dog; or (c) being a bitch in heat and being neither led nor carried; or (d) suffering from any contagious disease and not being carried; or (e) suffering from any disease or injury which causes pain to the dog and being neither led nor carried, that dog may be seized by any police officer or dog catcher and the owner of the dog shall in cases (a), (b) and (c) be liable on summary conviction to a fine not exceeding twenty-five dollars.”

Ferocious dogs should be muzzled while out in public

In the case of allowing dogs to be at large, section 17 of the Dog Act states, “Notwithstanding anything contained in this Act, no owner of a dog shall permit that dog to be at large in any street or place of public resort in any town and any person who contravenes this section is guilty of an offense and is, on summary conviction, liable to a fine not exceeding one hundred dollars.”

Owners could be held accountable for dog attacks

The San Pedro Police Formation has dealt with such incidents and asked dog owners to properly collar and leash them. Owners should also be in control of their animals (dogs) at all times. In any unfortunate case, police can hold owners of improperly kept animals responsible for their doing and charge them for the negligent damage their dog commits. Chapter 98 of the Laws of Belize, Revised Edition 2000, Petty Offences, Section 4 (1) states, “A person who permits any unmuzzled ferocious dog to be at large or set on or urges any dog or other animal to attack, worry or put in fear any person or beast commits and offense.”

Pet owners are reminded to place name tags on their animals with contact information. In the case of a missing dog or cat, if found, it can be returned safely and quickly.

This legislation is once again looked at as San Pedro is a community where dogs and cats are part of the family. Each pet’s health and welfare are important; thus, such regulation needs to be enforced for their safety.

More on Community and Society
Winner of the Costa Maya Contest

Calendar of events for the San Pedro Lobster Festival announced