While the much anticipated and patriotic citizen and uniformed parade to commemorate the 224th anniversary of the Battle of St. George’s Caye took place in different cities and towns on the mainland, the event was canceled in San Pedro Town. The San Pedro Town Council (SPTC) said the parade could not occur due to the inclement weather, a freak storm that battered the island in the early hours of Saturday, September 10th. Many island residents believe the parade could have been postponed and held later in the day.

The bad weather started shortly after 5AM on September 10th, causing heavy showers and thunderstorms in San Pedro. Hurricane-like winds blew across the town. San Pedro even experienced a power outage due to thunderstorms. Afterward, the SPTC issued a message canceling the St. George’s Caye Day parade. But hours later, the weather changed, and there was no more rain. Some residents said the parade could have been held later in the day as other places across the country did. 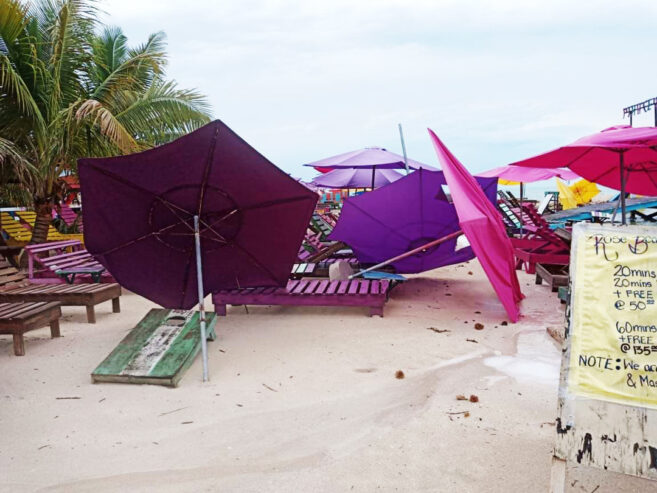 The storm’s aftermath saw trees falling on golf carts and fences, docks, businesses downtown, and even Secret Beach saw their property disturbed by the strong winds. The heavy rain also flooded many side streets. The National Meteorological Service of Belize had forecasted the bad weather; however, no one anticipated it to be so severe.

The parade in San Pedro was to start at 10AM from Central Park in downtown San Pedro. The anticipated parade, the first since the COVID-19 pandemic, was to end by the beach park at Boca del Rio. The holiday celebration would include a beach party for the remainder of the day.