After a two-year hiatus, the San Pedro Holiday Hotel resumed its biggest annual Halloween celebration in San Pedro Town. Held on Saturday, October 29th, at its restaurant La San Pedrana, the anticipated event is considered the largest in the country, featuring islanders and visitors dressed in various creative costumes. The festivities saw several attendees walking away with fabulous prizes within different categories, starting from the craziest to the most creative outfit. 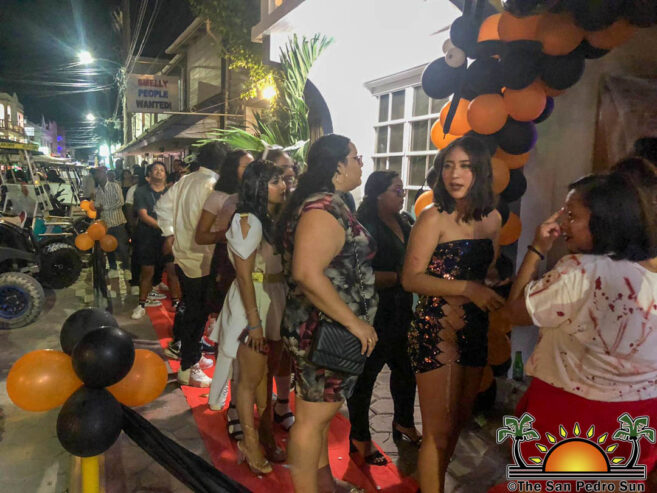 The event included an orange carpet, contrary to the usual purple, that was rolled out at the entrance of the hotel’s restaurant. There were over $10,000 in giveaways and prizes, and for the first time, door raffles were given throughout the night. Attendees with and without costumes graced the carpet and made their way inside La San Pedrana after being screened by police officers. The hotel restaurant quickly became filled with people dressed as different characters.

The party could not go without the presence of important persons in society. El Salvador President Nayib Bukele, Elvis Presley, and famous painter Bob Ross imposters also attended the most spectacular celebration on the island. Other appearances included the Banana man, the Purge, and the Joker.

As the celebration continued with DJs spinning the popular tracks, each costume was scrutinized by a group of judges. After some time, the scores were tallied, and this year’s Halloween extravaganza winners were announced. The prizes included gift certificates, dinners, hotel stays, bar tabs, local flights, sailing trips, gymnasium memberships, and cash giveaways.

The first prize in the Best Makeup category went to Dann Devil costume. La San Pedrana Manager’s favorite, the Ugly Bailarinas, was announced as the winner, and Poseidon and Medusa received the Best Couple costume. Lisa’s Favorite prize went to a pair dressed as cowboys (the cowgirl and cowboy). The Sexiest went to the costume of Joker/Anita, and Yellow Man or Banana Man costume was the winner in the Funniest category. The Crowd’s Favorite was the Ghostbusters outfit, while the Best Group costume winners were not present. As a result, a new set of winners were selected by the crowd present. They chose a group from the audience wearing a costume of Los Muertos (the death). The Purge outfit stood out among the rest in the Scariest category and was declared the winner.

Afterward, the winner of the grand prize was announced. The winning costume was reviewed one more time on the list and the top Halloween costume for 2022, in the Most Creative category, was the Bob Ross outfit. The top prize was $1,000 cash from Holiday Hotel.

Organizers congratulated all the winners and thanked everyone for making the post-pandemic event a grand success. A BIG thank you also goes out to the sponsors for donating some prizes for the celebration. The organizers also took the opportunity to tell everyone about next year’s event and to start planning their costumes for another memorable Halloween party in 2023.