The Government of Belize (GOB) announced on Thursday, December 5th its intention to control and eventually phase out the use of gill nets in Belizean waters over the course of two years. This mechanism includes a moratorium on gill net licenses, restrictions on its importation based on licenses and usage in the southernmost waters of the country. Such a move by GOB was not well received by marine conservation organization entities like Oceana Belize, who believe the decision will allow for the continued practice of the destructive fishing method. Moreover, the GOB decision to turn down a $2 million fund that would be disbursed to licensed Belizean fishers to transition away from using gill nets was considered a missed opportunity. A day later, GOB issued a Statutory Instrument (SI) removing eligibility of permanent residents to apply for fishing licenses. 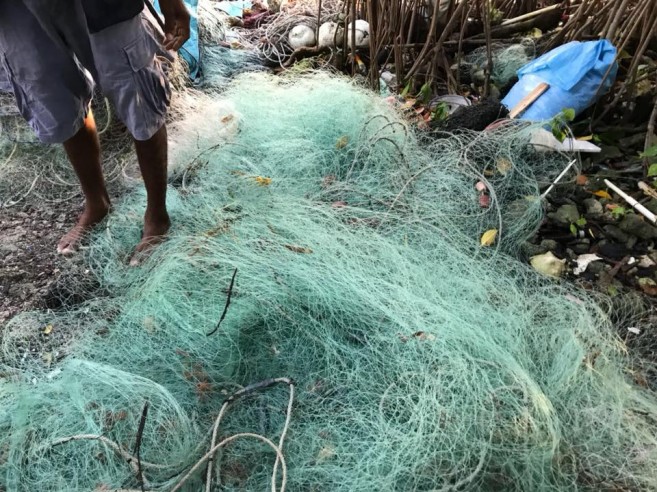 In its initial announcement, GOB explained that gillnets will have to be re-registered and licenses will now be for a seasonal duration. The size of the mesh type gill net will be adjusted in order to lessen the likelihood of by-catch of protected marine species, such as turtles and sharks. According to the government, these measures were agreed on after taking into account concerns about livelihood from fishermen, citizens and experts surrounding the impact of gill nets on marine life and the economic cost of continued use in contrast to a proposed ban.
To control the 83 licensed gill net fishers across the country, an amendment was made to the Fisheries Regulations to prohibit permanent residents from obtaining fishing licenses. According to the new SI 81 of 2019, only Belizean applicants, at least 18 years of age, with evidence of residing in Belize for a continuous period of at least six months will be eligible. Documents needed to apply for a fishing license require a valid Belizean passport, Belizean voter’s identification card or Social Security card accompanied by proof of address or a Belizean driver’s license accompanied by a Belizean birth certificate or Belizean nationality certificate. GOB also spoke about the possibility of a trade-in/alternative livelihood program with donor support leading to a successful transition to alternative fishing gear, after which an immediate ban would be considered.
Oceana Belize saw these decisions by GOB as a failure to safeguard the livelihood and rights of the 97% of commercial fishers who do not use gill nets. They issued a statement noting the lost opportunity to fund the transition from gill nets after the government turned down a $2 million financial aid package. “The only thing going away is the money that would have gone to licensed Belizean fishers,” said Oceana Belize’s Vice President, Janelle Chanona. “Oceana’s advocacy against this indiscriminate and destructive gear continues,” Chanona explained that the funds were raised after obtaining data from the Belize Fisheries Department and the fishing community as well regarding the value of nets and the financial income derived from gill netting. “The figures were calculated and fundraising commenced,” said Chanona. “What was on the table was the result of just a few months of fundraising showing there is support out there. It is lamentable that after those offers were officially put on the table, the Minister of Fisheries did not see it fit to have a conversation with us to negotiate on ways forward.” Chanona also emphasized that such fishing practice not only affects the fishing industry, but also the fly fishing industry in the tourism sector.
Other organizations reacting to GOB’s measures on gill nets include the Belize Network of Non-Governmental Organizations (NGOs). Senator Osmany Salas representing the NGOs said that they will not give up until gill nets are banned from Belizean waters. The Belize Territorial Volunteers from southern Belize also issued a statement indicating that through the continued use of gill nets, the government is conceding to illegal fishing. The statement added that they applaud all the efforts of other organizations, who continue to pressure for a complete ban on gill nets.

Letter to the Editor: Destruction of the island