Innovation in new products and services, exploiting the new infrastructure of the faster bandwidths from DigiNet and the host of automated, digitized electronic services the Government is rolling out, will be the key to new jobs, more earnings, and economic growth, Prime Minister Hon. Dean Barrow promised at a business forum hosted by the Economic Development Council at the Belize City Center on Thursday morning, February 21. 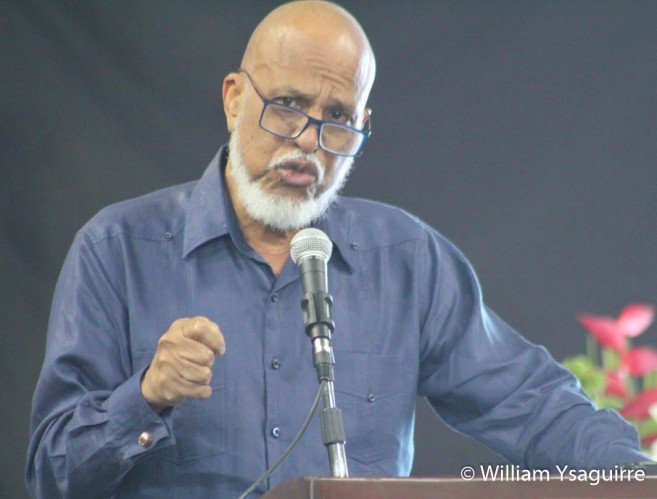 Leading the charge to success along the information superhighway is the nationally owned Belize Telemedia Ltd, which is rolling out its new fiber optic internet service, rebranded “Digi,” to the country. Independent speed tests show Belize now has the best mobile service in the region, Barrow proudly boasted, not just in Central America and the Caribbean, but in Latin America!
Doing business over the Internet requires full, impregnable security, and to meet this need, the National Cyber-Security Task Force is already drafting the legislation in collaboration with the Central Bank. Central Bank Governor Joy Grant affirmed that the bank is already implementing measures to ensure the security of online transactions by all the commercial banks, and the transfer of securities. 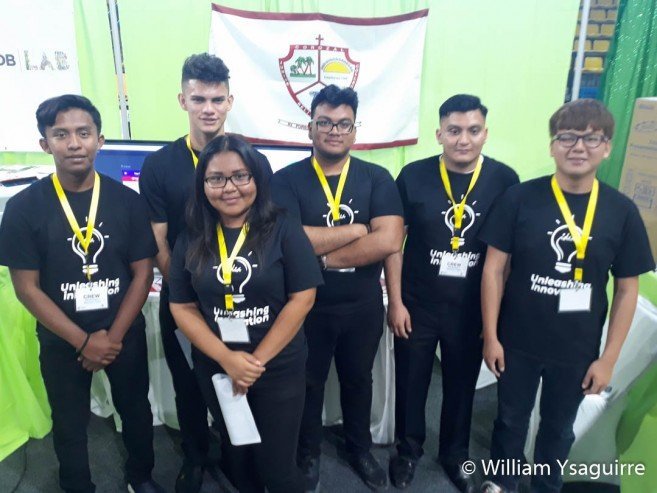 The new Digital Ecosystem is intended to stimulate innovation, and the students of Corozal Junior College, winners of the Ministry of Education’s last cyber-innovation challenge, have embraced it whole-heartedly. A CJC team had a booth at the forum demonstrating their new mobile app – You Reform Belize (YRBz), which they designed for the Economic Development Council. 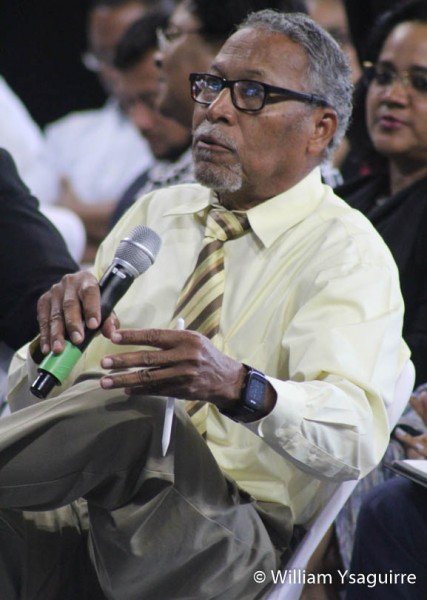 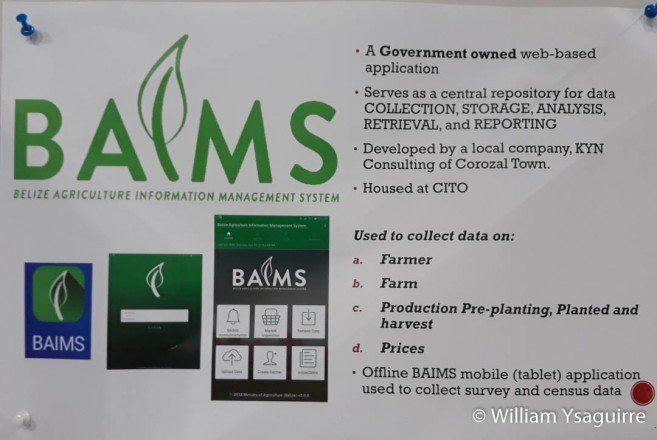 Housed at the Central Information Technology Office (CITO) in Belmopan, the BAIMS app files the size of each farmer’s land and location, the crops they have under cultivation and the acreage, which can then be analysed to use in reporting on the availability and production of any agricultural product, to meet market demands. Hulse said the system is already being used to analyse data on the acreage of land under local potato cultivation when planted and the anticipated size of the harvest, to help farmers match local buyers’ demand. The same can be done for any other crop. 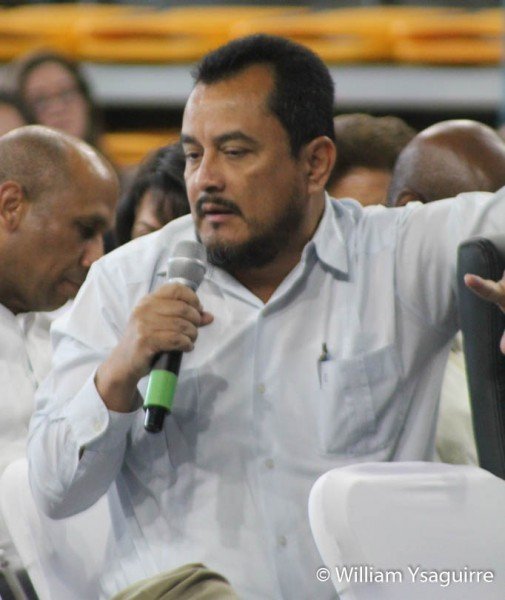 Chief Executive Officer Jose Alpuche admitted that we live in a democracy where free market forces determine demand, supply and prices, and the government did not wish to interfere with a private sector situation, where market demand determines the prices farmers get. So, while they might restrict the licensing of imports to stimulate local production, some importation would have to be allowed in the months when there is a local production. 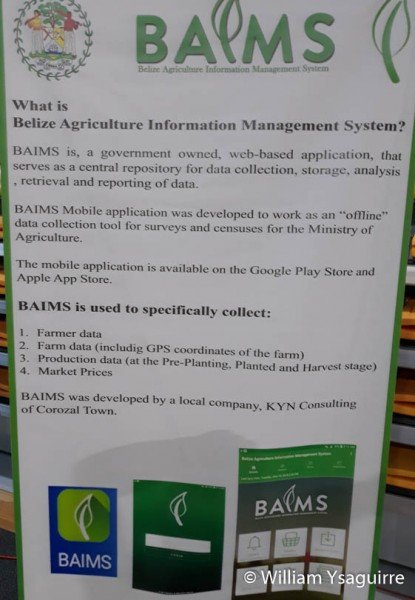 The Government of Belize has also bringing e-government processes online, with technical support from the Government of Taiwan, to reduce the cost of doing business, and speed up licensing, registration and revenue collection. The new digital services are intended to increase efficiency, eliminate the possibility of malfeasance, for greater accountability and transparency. As GOB reduces its operating costs and improves tax collection, the business sector hopes GOB will pass on the savings through tax reform – specifically lower taxes! 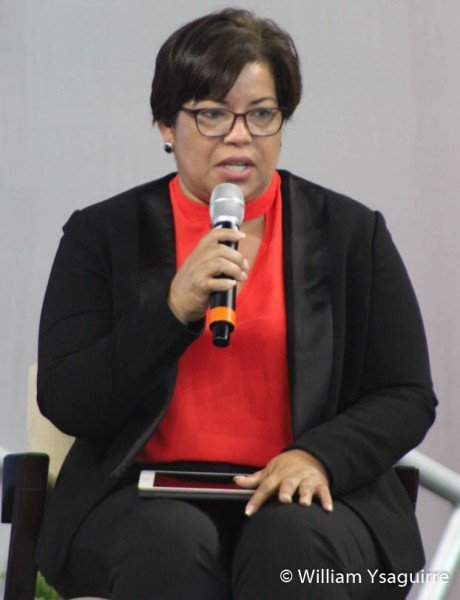 Barrow assured the business people present that GOB’s integration of the General Sales Tax regimes with Income Tax will streamline service. He has tasked Mrs. Michelle Longsworth, formerly Director of the Central Information Technology Office (CITO), to modernize and digitize the Tax Department. Barrow pooh-poohed the suggestion of endemic corruption among public officers and even government ministers, saying “Let him who is without sin cast the first stone!”
The new technology is already paying dividends with more revenue collection of fees for land transactions at the Lands Department, P.M. Barrow affirmed. He called on Minister of Trade and Investment Hon. Tracey Panton to confirm his assertion that as a result, “new multi-million-dollar investments are coming in thick and fast!”
Government is also working on cutting utility costs, Barrow promised, as he called on power engineer Ambrose Tillett of the Public Services Commission (PUC) to explain how the Belize Electricity Ltd (BEL) has drastically cut the cost of new connections. Tillett explained how the PUC’s four-year cost of power review keeps BEL’s rates to consumers fair and as low as possible, with the next review due next year.
On the matter of a recent BEL rate increases, Barrow admitted we are not entirely “Masters of our own destiny”; as Belize relies heavily on the Comision Federal de Electricidad (CFE) of Mexico, which supplies the largest part of Belize’s power consumption. Additional transmission costs had pushed up the cost of this imported energy, and the only way Belize can escape these external tariffs is to move toward with renewable energy sources, such as hydro-electricity from BECOL, bio-mass utilities such as BELCOGEN, and even solar power. He promised GOB is offering tax incentives to businesses which invest in energy efficient technology.
GOB is also paving the road to progress, Barrow promised, with road improvements and upgrades all over the country, funded with loans and grants from Organization of Petroleum Exporting Countries (OPEC), the Kuwait government, OFID, the United Kingdom and Taiwan. The Belize Motor Vehicle Registration and License System Project, funded through Taiwan’s International Cooperation Development Fund (ICDF), has also helped digitize transport licensing.
Barrow said a new National Transportation Plan is being implemented, which includes the construction of an all-new Belize City Bus Terminal in the Lake Independence area.
Crime has also been targeted by this technology upgrade, as Barrow vouched that new crime investigation laboratory is to be built with funding from the Central American Bank for Economic Integration (CABEI), and it will have full DNA testing capability, to support the Police in their forensics investigation. Barrow said this was part of regional security cooperation programme that will also see Belize Police databases linked to regional databases and full integration with the data systems of other law enforcement agencies, for the swifter identification of suspects and weapons.
Citizens’ security will also be improved by a Belize Chamber of Commerce and Industry initiative to partner with BTL in implementing a “smart cities” network of surveillance and public security camera systems. All in all, Barrow said his government is doing everything to improve the business climate through a dynamic transformation for more growth. 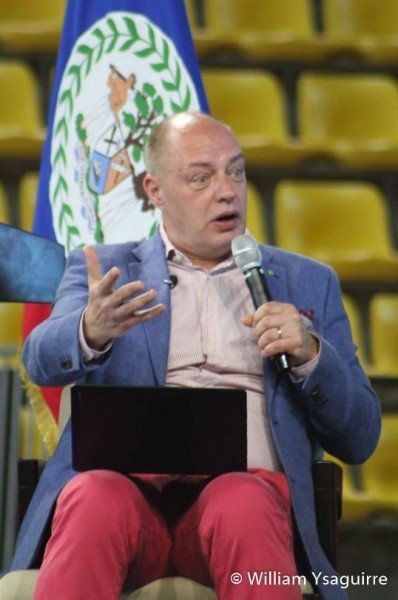 To stimulate the business people’s imagination of the possibilities of digital government processes, Barrow invited two guest speakers: Linnar Viik – director of Estonia’s Smart Government Program, and Glynis Alexander-Tam of Trinidad & Tobago’s InfoLink. Viik highlighted the way how the digital government was allowing Estonian citizens to access all government services online, and how greatly improved the efficiency is by removing the human element, allowing the government to also save millions by reducing its human workforce. Barrow hedged some caution here, as he assured that Belize was not quite ready for a robotic process of government, which could cut GOB’s wage bill by laying off thousands of government workers but would not be popular with the public. 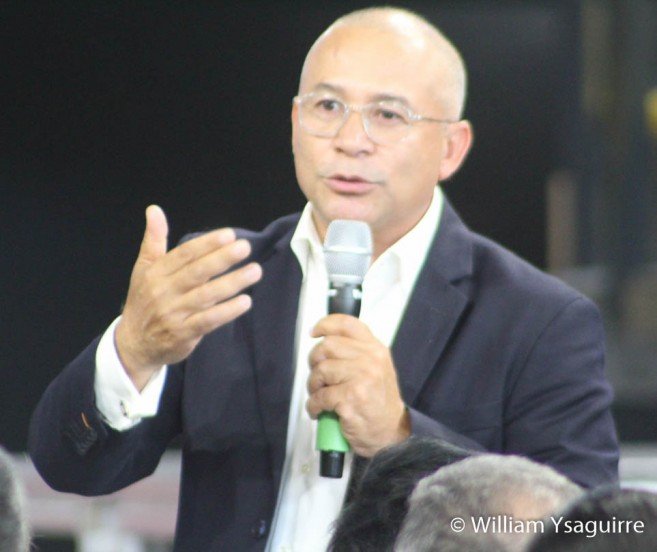 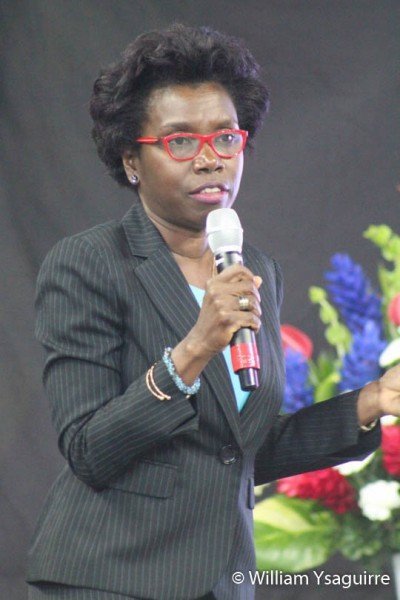 Glynis Alexander Tam explained how the LINX system implemented by the five commercial banks of Trinidad back in 1999, beginning with the automatic teller machines (ATM) in 1995, and points of sales credit and debit card terminals in 1996. She said the preliminary survey in 1993 found there was a lot of unnecessary duplication of credit card machines for all sales outlets – one for each bank, which was found to be inefficient. The LINX system improved customer service and reduced transaction costs, because allowed one machine to read all the banks’ credit and debit cards at ATMs and sales outlet, allowing for a new system they called “corp-etition.” This paved the way for cooperation in providing new services, and the resulting success was proved by the successive spikes in increasing transactions in 2002, 2007 and 2010, as growth spiraled upward.