The treatment of sewage and wastewaters on Ambergris Caye is an ongoing issue that seems to be worsening as the island continues to develop. One of the main concerns is the volume of solid sewage waste over the long-term, as there is yet to be a designated area on the island to handle solid waste from septic systems. While the local authorities do not seem to have a permanent solution, businesses in the Secret Beach area north-west of Ambergris Caye, have been tasked to adopt aerated septic tanks to minimize the impact on the island’s delicate environment. But even this system is not enough, and complications have been reported at this popular beach area. 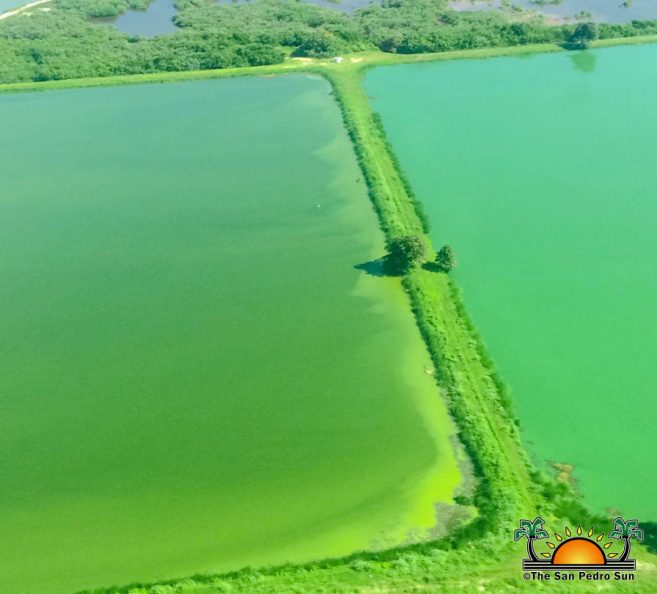 One islander trying to help mitigate the issue by providing his services is Chuck Rice. He owns a company that designs and installs septic tanks and provides drain services. Rice believes the island situation is close to critical if the necessary measures are not set in place to treat sewage solid waste. He also believes this is the factor leading to illegal dumping as there is nowhere to dispose of solid waste. Belize Water Services Limited (BWSL) counts with sewage ponds in southern Ambergris Caye; however, they do not accept solids. “They do not have the capacity to accept the solids because their ponds are not designed to break it down,” Rice said. The only solids they can accept are from the houses and businesses connected to their sewage system running from downtown to their ponds. This system is equipped with different substations, which breaks down waste. But most of the island is not connected to this system, leaving them with no options to treat their solids.
The aerated septic tanks at Secret Beach are designed in a way to treat the wastewater from the kitchens and bathrooms. It counts with interceptors, which filters all the waste from the kitchen (greases, food residuals) and also breaks down waste from bathrooms. According to Rice, by the time it goes through the system, the end product is treated water that can be used for irrigation purposes. However, it should not be directly disposed into the environment without going through further filtration. He said that many businesses in that area are making their best efforts to adopt the new system, which was mandated by The San Pedro Town Council. But this new method has seen challenges due to certain factors. 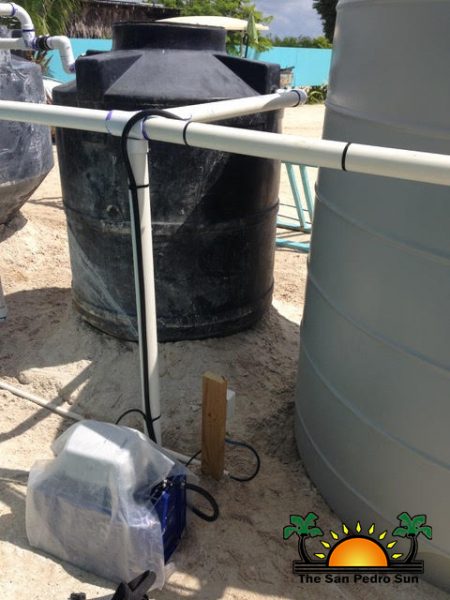 One is the fact that Secret Beach is not yet connected to the local electricity grid; thus, all businesses need to power their establishments with generators. “Aeration is based on a 24-hour supply of power,” said Rice. “With no steady flow of power, there is no full aeration, and the system may end up being non-functional.” Some places at Secret Beach allegedly keep their generators on for around ten hours a day, which may not aid in the proper aeration of their septic systems. The other issue is the volume of people visiting the area, adding to the pressure on the system as thousands of gallons of water are used daily. Some of this wastewater consists of urine, which according to Rice, does not break down easily. He added that another major concern is where all this water goes. Rice also indicated that whenever the island goes through their peak seasons, a great amount of waste is generated, which is beginning to manifest outside the island, making its way to the barrier reef.

The efficiency of aerated systems
Rice says that aerated systems are very efficient but very expensive as well. “What needs to happen to have a functional system is proper maintenance. If you do not give them maintenance, they will get clogged with solids to the point that it will not work,” Rice explains. This process can also be costly, and when someone wants to clean their septic system, only the water is removed, leaving behind the solids. However, with no place to get rid of the solids, chances of the continued illegal dumping are more than likely to happen, until the authorities make the necessary investments and safeguard the environment.

One solution
Rice suggests getting a proper vacuum truck to clean septic systems on the island and building a ‘Tip Bed’ next to the sewage ponds. He adds that this suggestion was made to Belize Water Services Limited some time ago. According to Rice, the tip bed would be designed to treat solids, could be built in a short time, and would cost around $250, 000BZ. It will count with screens to sieve the waste solids, collect it and let it dry. Afterward, it can be scooped out and taken to the waste transfer station for its proper disposal. 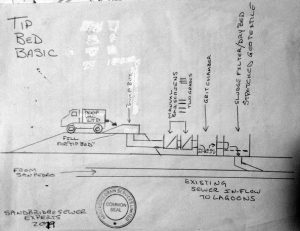 Rice submitted the project’s designs to the Department of Environment and BWSL in July 2018. The proposal allegedly was handed over to BWSL’s construction department for approval. Rice said that up to today, there has not been a word or any sign of any intentions to carry on the project, which could help alleviate the issue of illegal solid waste dumping on Ambergris Caye. Rice adds that the investment for such a tip bed is expected to generate revenues for the Water Company, as a five-cent charge per gallon of waste was suggested. With all the residential and commercial buildings on the island, this could be a win-win situation, whereby less toxic waste would make it to the environment, and potential new jobs can be created. BWSL was contacted about such a proposal submitted to the company, but our inquiries were not answered.

The only attempt from BWSL that has been announced in the past is the construction of a water treatment plant in northern Ambergris Caye to the tune of $60 million BZ. The plant is expected to treat raw waste and count with a reverse osmosis desalination treatment plant. But until then, and every day that goes by, solid waste will continue to accumulate and be dumped into the waterways surrounding the island, as there is nowhere this toxic waste can be taken. Meanwhile, the health of the local environment and the great Meso-American Reef System continues to be exposed to contaminates, threatening the future of the many that make a livelihood from this valuable natural resource.