San Pedro High School (SPHS) dominated in the Northern Regional Championship in Track and Field on Friday, March 22th. For SPHS Principal Emil Vasquez, the win is a great complement to the SPHS Male team winning the National Softball Competition on March 16th.

The medalists who captured first and second place medals in the various games will move on to compete in the National Track and Field Championship.All members of the SPHS track and field team trained for quite some time to prepare for the games and will continue training even more for the nationals.

The team participated in runs which included five and three kilometers, 1500, 800, 200 and 100 meter runs, 4 x 400, 4 x 200 and 4 x 100 meter relay runs. They also participated in shot put, discus throw and javelin. In the jump disciplines, the athletes participated in high, triple and long jumps. Both males and females competed at the junior and senior level.

In the male category, team member Gian Rivero, who represented the country of Belize in the 2012 CODICADER Scholar games in El Salvador, brought home three gold medals, including gold in discus throw. Runners Afrie Black and Marvin Bonilla dominated the 200 meter run, bringing home both the first and second place medals. Alex Roache won the 1500 meter dash and was given the title of “fastest male athlete in the Northern division.” The SPHS male team also took gold for the 4 x 200 meter relay run, while runner Brandon Santos brought the gold for the 400 meter senior division run. 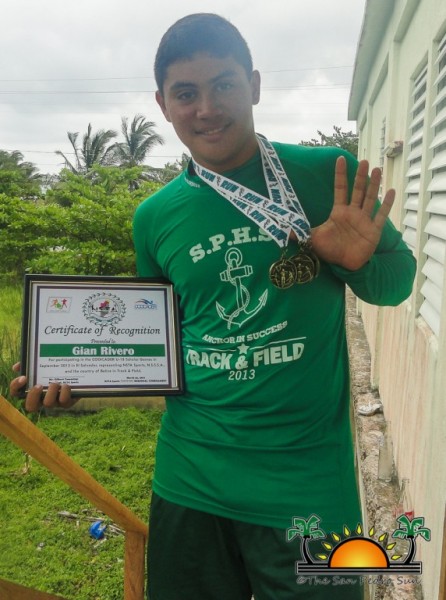 The SPHS female team also brought home their fair share of medals. Runner Isolene Bailey took gold in the 400 meter run. The female relay run team also took the title of best team in the Northern division. Debra Arthurs not only took gold for 100 meter but is also the fastest female runner in the northern division.

The San Pedro Sun joins the community in congratulating the SPHS Track and Field Team on a job well done.