San Pedro star triathletes once again shone in national competitions, with Jordan Santos being part of the winning team for the Olympic Distance Triathlon and Kent “Bob” Gabourel winning the 2015 Annual National Beach Cruiser Cycling Race. Both races were held in Punta Gorda Town during the Independence Day weekend. Island athletes Jordan Santos, Brandon Santos, Kent Gabourel, Eric Donis, and Kian Ancona all made San Pedro exceptionally proud as they continue to perfect their skills in local races across the country. 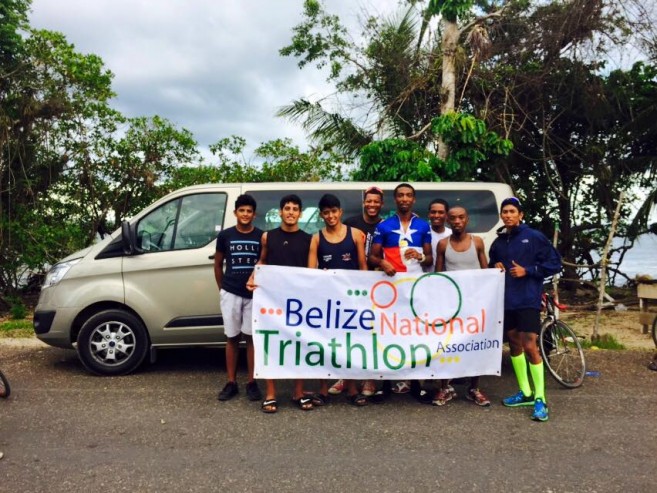 First to take place was the Olympic Distance Triathlon, which was held on Saturday, September 19th.
11 relay teams lined up for this event that had the participants swim 1,500 meters, followed by a 40 kilometer ride and a 10k run. A very difficult feat for any professional athlete, this race tested the participants’ utmost endurance and stamina.
As the race kicked off, athletes took first to the water for the swimming discipline of the triathlon. First out of the water was 20-year-old Brandon Santos of team C-Ray Deadly, with a time 0:24:44 (hours:minutes:seconds), followed closely by his brother, 17-year-old Jordan Santos of team San Pedro Tri with a time of 0:28:26. The Santos brothers had veered off course on the return leg of the swim which allowed Deon Cus of the Belize Coast Guard (BCG) team to make up time, ending his swimming segment in 0:28:56.
The second leg of the tournament was cycling. The three riders, namely Brandon Cattouse, Joel Borland and Kent Gabourel started working together to keep any other teams from catching them. They worked well together until seven miles from the transition area. On one of the last rolling hills, Borland of team BCG was able to create a separation between himself and Gabourel of team San Pedro Tri, taking the lead.
On the final segment, Glen O’Brien and Juan Bulum went stride for stride for the first mile of the run. O’Brien of C-Ray Deadly steadily picked up the pace, until he let Bulum of BCG go about three miles into the 10k run. O’Brien finished with a comfortable lead and claimed his share of the first place prize for his team.
Team C-Ray Deadly comprised of Jordan Santos, Brandon Cattouse and Glen O’Brien, took the first place cash prize of $2,100. In second place team BCG, comprised of Deon Cus, Joel Borland and Juan Bulum, who walked away with a cash prize of $1,200. Taking the third place cash prize of $900 was team San Pedro Tri of Brandon Santos, Kent Gabourel and Eric Donis. The fourth place prize of $600 and the fifth place prize of $300 went to teams Cost Guard 2, comprised of Kulvert Cal, Joslyn Chavaria and Rodre Lewis, and team C-Ray Tri-throttle, comprised of Kian Ancona, Ray Cattouse and Alexander Alvarado, respectively. A cash prize of $75 was also given to 16-year-olds Kian Ancona and Zidna Hines for being the youngest athletes, while 54-year-old Ray Cattouse got a cash prize of $150 for being the oldest athlete in the race. 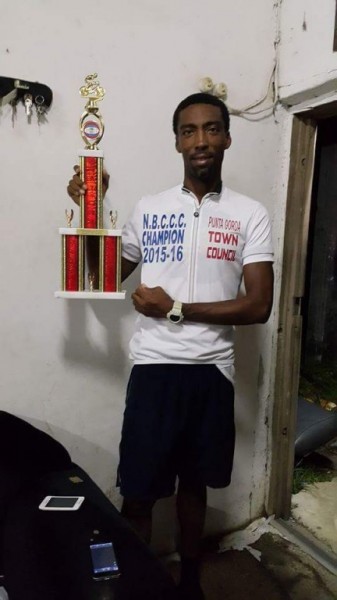 The second race of the weekend was held on Monday, September 21st, and was the National Beach Cruiser Cycling Race. The 13-lap race, saw cyclers ride beach cruiser bicycles for a total of 48.5 miles. In the end, it was Gabourel who finished in first place, with Charles Nuñez from Punta Gorda Town taking second place. Gabourel is now the back to back champion of the National Beach Cruiser Cycling Race, as he is reigning champion for the 2014 instalment. “This race was me at my best. I love competition and enjoy winning. My passion and dedication for my hobbies is incomparable,” said Gabourel.
The island athletes would like to thank everyone who sponsored them in their competition: Brian Acosta, Gabriel Nunez Sr., Armando Graniel. Jorge Aldana, Marion Mejia and Giovanni Alamilla.
The San Pedro Sun congratulates all athletes on an excellent show of sportsmanship.