After an unprecedented home loss in last week’s game, the San Pedro Tiger Sharks basketball team has come back strong, winning two games during the fifth week of the 2016 National Elite Basketball League (NEBL) Season. Four games were played this past weekend, with the Tiger Sharks playing two matches. Both of the Tiger Sharks games were away matches, but that did not affect their stride, as they managed to win both decisively. With these two new wins, the Tiger Sharks are in the second position of the tournament with four wins and only one loss. 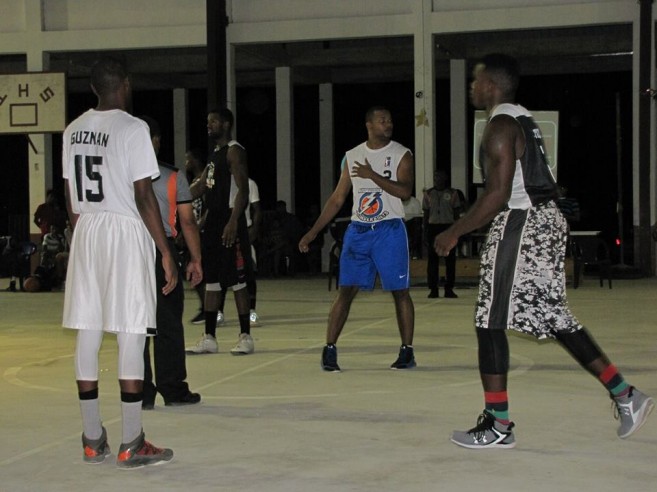 The NEBL game weekend started on Thursday, February 11th with Belmopan Bandits hosting Independence Thunderbolts at the University of Belize gymnasium in Belmopan City. Both teams were trying to record their first win of the season. The Belmopan Bandits jumped out to a first quarter double-digit lead that they never relinquished, handily defeating Independence Thunderbolts, 114-43.
On Friday, February 12th, Dangriga Warriors hosted the defending champions, San Pedro Tiger Sharks at the Ecumenical College in Dangriga Town. At the end of the closely contested match, the visitors, San Pedro Tiger Sharks was able to notch the 70-60 win. The Tiger Sharks was led by Raul Roches with 13 points and 2 assists, while Ashton Edwards scored 12 points. Gene Myvett tallied a double-double with 10 points and 12 rebounds, while Andrew Ortiz finished with 10 points and 5 rebounds.
But the games did not finish there for the Tiger Sharks, as on Saturday, February 13th they traveled to Mango Creek to take on Independence Thunderbolts at the Independence High School Auditorium. Independence Thunderbolts jumped out to a fast start, with a 15 – 9 lead at the end of the first quarter. However, by halftime San Pedro Tiger Sharks took control of the game with a 36 – 22 lead. They never gave up, winning easily, 75 – 41. In this game the Tiger Sharks were led by Caleb Sutton with 16 points and 6 rebounds while Ashton Edwards sank five three-pointers, to finish the game with 15 points and 3 rebounds. Gene Myvett finished the night with 13 points, 6 boards and 3 assists.
The final game of the weekend was also played on Saturday and saw Dangriga Warriors traveling to Belize City to take on the undefeated Smart Hurricanes at Bird’s Isle. The home team jumped out to an early 17 – 11 lead at the end of the first quarter which they maintained throughout the game, until Dangriga Warriors was able to close the gap to 47 – 44 at the end of the third quarter. However, Smart Belize Hurricanes was able to secure the 70 – 61 victory to remain as the only undefeated team in the league for this season.
Upcoming games will see the Belmopan Bandits facing off the Cayo Western Ballaz at Sacred Heart College Auditorium and the Orange Walk Running Rebels taking on the Smart Belize Hurricanes at Bird’s Isle Basketball Court on Friday, February 19th, both games starting at 9PM. On Saturday, February 20th at 8PM, the Dangriga Warriors will take on the Independence Thunderbolts at the Independence High School Auditorium, while the Orange Walk Running Rebels will take on the Belmopan Bandits at the UB Gymnasium. The final game of the weekend will see the Belize City No Limit facing the San Pedro Tiger Sharks at the Angel Nuñez Auditorium at 9PM. Everyone is invited to come out and support their home team.
All games can be followed live at nebl.sportingpulse.net, with real time box scores while the game is being played. The website also has all game scores, box scores, players and teams’ statistics, along with standings for the season.