Island athlete Ian ‘Lion’ Gordon continues to proudly represent San Pedro Town and Belize in international marathons. Gordon recently placed 30th out 160 competitors in the 40-49 age category at the XX Gran Marathon Pacifico Mexico race held in Mazatlan, Sinaloa, Mexico on December 1, 2018. The race saw the participation of approximately 10,000 runners competing in four different categories. It is rated as one of the top 10 marathons in the world, as it sees the participation of some of the world’s best. 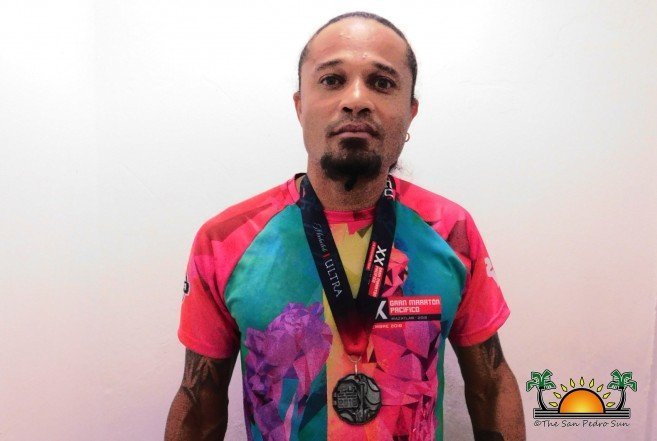 Gordon told The San Pedro Sun that the race was a great experience, helping him to grow as a professional. “It is always an honor to participate and represent Belize in these international marathons. Nevertheless, the most important part of it is that it prepares me for future races as it motivates me always to push myself to continue doing better,” he said. One of Gordon’s main goals is to compete in the 2024 Olympic Games to be held in Paris, France and be an inspiration to those people who believe that they are too old to accomplish their dreams.
As for that Olympic dream to come reality, Gordon is now taking up another international race to further his preparation. He is planning to compete in the Marathon Internacional de Culiacan (Culiacan International Marathon) to be held at Culiacan City, Sinaloa, Mexico on Sunday, January 20th. The Marathon Internacional de Culiacan is a marathon for a cause as all the proceeds of the participating athletes go to children with cancer through the Private Assistance Institution GANAC (Groups of Friends of Children Affected by Cancer). This marathon is also considered one of Mexico’s best and has been happening for the past 30 years, seeing the participation of athletes from all around the world.
Gordon has been living in San Pedro Town for the past 19 years and is a well-known island resident.
He has participated in several international marathons, as well as local ones such as the Annual Breast Cancer and Diabetes Awareness walk/run, RISE and SHINE 5k walk/run among others. Any person or business that is interested in helping Gordon financially to participate in the Marathon Internacional de Culiacan can call him at 628-6696 or 665-4372. He can also be reached via Facebook under Ian Gordon.